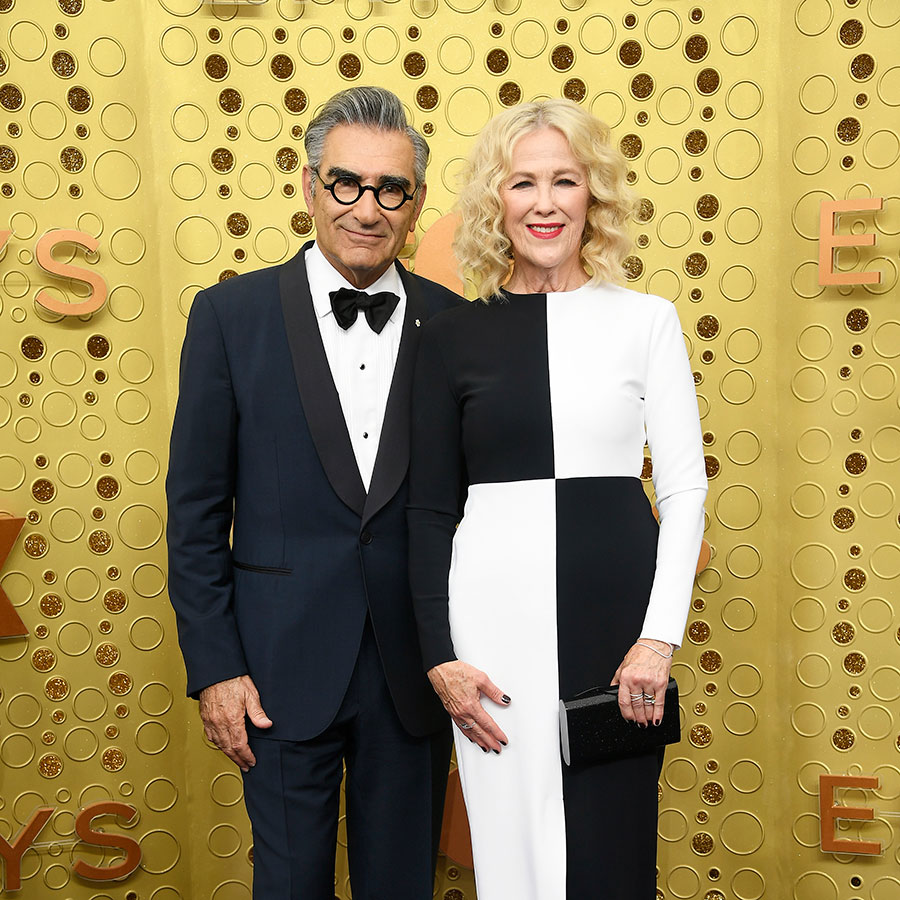 CATHERINE O’HARA: We did no interviews while we were doing SCTV. Only now, 40 years later, are people talking about SCTV. [Laughs] And now, you can’t do anything without everybody knowing about it, and everybody having an opinion on it.

EUGENE LEVY: Social media and everything – you can do one thing and the next day it’s out all over the place. When we were doing SCTV it was like, we’d go into work, we’d shoot in the studio, and then go home for dinner. [Catherine laughs] I had no concept that people were actually watching the show. Honestly, it wasn’t until we started getting sent reviews from some Dallas newspaper, and we’re going, “Oh my gosh, they’re watching this in Dallas?”

CO: There was a certain freedom in that too, where you don’t have to worry about a zillion people commenting on what you’re doing. But it’s just different now. Of course, there are things that are better now, things that are not as great. So it’s fun to work with younger people.

EL: It was a fun way to work…Saturday Night Live, they started out, they were in New York, and they had New York City at their feet. And we went to work and then went home for dinner. Just as exciting in its own right…There’s something very kind of Canadian about it, which is, just do your work and then go home and, you know, shut up about it. Don’t make a big deal.

From the Small Screen to the Big Screen and Back Again

EL: My son [Daniel Levy] came to me a few years ago and said, “I have an idea. Do you want to work on a show together?” And I said, “Great.” [Schitt’s Creek] started as a lovely father-son exercise, and just kept going and now here we are promoting this show. So it was a very exciting project for us that actually became a reality.

CO: My dear friend Eugene conned me into [doing the show] and I’m so glad he did…I was impressed that he and Daniel had put this together and wrote a great script. And I thought, if I’m ever going to do a series, why not do it with my smart, funny friend who I already love and respect.

EL: And that’s a coup, on my part, because you’re very, very selective about what you do. So the idea that she trusted us enough to commit – I think is great.

CO: I’m already hot flashing … Once I start getting self-conscious, it gets way worse.

EL: Oh, alright … I won’t say another nice thing about you.

CO: I, as a gift to my parents, flew one of my sisters and her family from out west to Toronto. And we were on a break from SCTV and…we didn’t tell my parents. This was my idea of a Christmas gift. And the way we announced them being in town was I was at home with my mom and dad and we heard carolers outside. It was my sister, her husband, and her kids. And we go, “Mom and dad, look! There’s carolers out on the lawn.” My mom opens the door and she looks at them – they’re kind of in the distance at the end of the driveway – and [her mom] goes “Oh my god, oh my god!” and thought she was seeing the faces of my sister and her family because they were dead somewhere. The reaction was not what I’d hoped at all, and my mom referred to that Christmas gift as the time I tried to kill her.

EL: Wow…The gift that almost killed your mother. That put a little chill down my spine.

CO: [They both laugh] Yeah, it turned into something very different. Well, after she realized they were alive then she was very happy they were there, of course. She loves them.

Eugene as Hamlet? As Shakespeare would say, “Get thee a ticket before it’s sold out!”

EL: [When asked what types of roles he’d still like to pursue] I’d like to play Hamlet as a slightly cross-eyed character just to see how long the audience will go with it before they actually get up and leave.

CO: Live theatre or on film?

CO: We were talking last week about how neither of us have a desire to do Broadway for a minimum of six months. I said two weeks. Eugene said a week.

EL: We’d never do it. First of all, you can’t appreciate a good dinner because you have to be at the theatre at 7:30. Your weekends are shot. And you’ve got to save your voice – you’re constantly nursing your voice.

CO: That was pretty amazing. Really, really cool, and not deserved, but who cares? I’ll take it.

MC: Did you mail anyone anything with it?

CO: Oh, are you kidding? Yes. My husband and I went back to the cottage in September for a few days and I brought my stamps with me and I mailed them to everybody, whether they wanted them or not. And then I gave everyone in my family a bunch of stamps and Canada Post has been so generous giving me just loads of stuff. I tell everyone don’t save them. Don’t hoard them. Just mail them. I love that they’re being used. It makes them official. And I mailed myself one from Ontario too…And then you’re included in a book of all the stamps of famous Canadians.

EL: That is pretty amazing.

CO: Eugene’s a good man. He’s a lovely man and on top of that, really smart and a great writer, and a great actor … With Eugene you know that it’s about the work. There’s no other crap in the way. And when you know somebody’s coming from that kind of sincere, professional point of view, it’s so much more positive to work with someone like that.

EL: I just have so much respect for Catherine. Catherine is just a very real person. But I’ve always just been impressed by how chameleon-like she is when she is doing characters or impersonations, going back to SCTV. And I love her approach to the work. I think we kind of work the same way. We approach our work like actors to a role, not like comedians who are looking for how we get the quickest laugh … There are not a lot of people that can bring to a role in comedy what Catherine can bring. So we’re lucky to have her, and I’m glad that she said yes to the show, and I’m glad she’s doing the show.

CO: I’m glad you created it. Thank you.

EL: You’re welcome. I’m glad I created it too, as it turns out. So I thank my son for coming to me and saying, “Hey, I’ve got an idea. Would you be interested in working on it with me?”