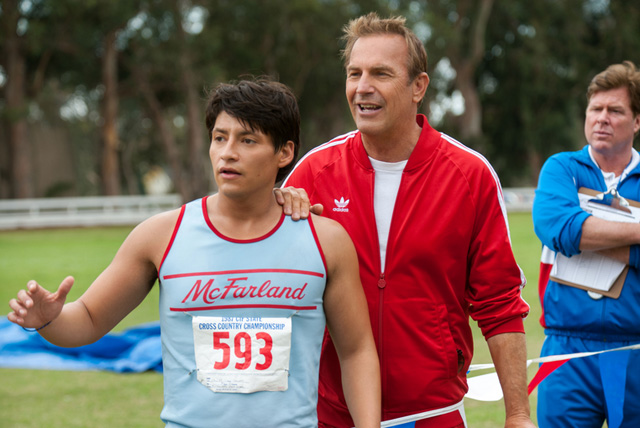 Choice Quote: “No one stays in McFarland unless they have to. There ain’t nothing American dream about this place.”

The Hype: Based on a true story, after being fired from numerous teaching positions, high school teacher Jim White’s (Costner) bridge-burning leads his family to McFarland, Calif., a poor and predominantly Latino town where a majority of the residents either work as harvesters in the fields or end up in jail.

When White recognizes that a number of his students possess a talent for long distance running, he establishes a school cross-country team that allows a small group of boys to represent their town against more affluent communities, both instilling a sense of pride in the residents of McFarland while at the same time allowing Jim White and his family to truly, finally, feel at home.

The Reality: This is the Disney version of this remarkable true-life tale – in essence, a bit of a sanitized account, though still a fun and dramatic movie. Like in his other recent release, Black or White, Costner finds himself on the cusp of a racial divide as the patriarch of the suburban family with two kids that end up in a Latino community that offers two paths for most of its youth – the fields, or jail.

Though the description makes the film sound like it’s about to fall off a cliff and into a chasm of cliché, it never really does. Sure, there’s some of the schmaltziness you expect from the Disney version of events, but the film does take some dark turns and offers a compassionate look at the conflicts and roadblocks so many communities like McFarland face.

As White, Costner grimaces through most of the film, though he does manage the occasional smile as he grows closer to the small team of runners he’s assembled for cross-country tournaments. And the kids, and really most of the townsfolk, are so likeable you can’t help but root for their success.

But the key to the film is what McFarland represents. For both the kids and White it’s a life sentence of sorts, and the key is the slow realization that the cell they feel they’re locked in is actually open and all they need to do is figure out a way to pass through it. And as they find greater and greater success with their cross-country team, the best part of the story is what each of these teammates, and White, ultimately does when they see the light at the end of the tunnel that leads out of McFarland.

Can the grandkids see it?: Absolutely. Very little ones might get bored but it’s certainly a family film.

The Verdict: As we approach the Oscars, many have been discussing the merits of the nominated films and which deserve to take home the gold statuettes. In contrast, McFarland isn’t a movie vying for attention from Academy voters next year. It’s simply a real story told in an entertaining and touching way that compels you to root for Jim White and his students and to share in both their victories and defeats. It’s a reaffirming film that proves even more touching when you remember it’s a true story.