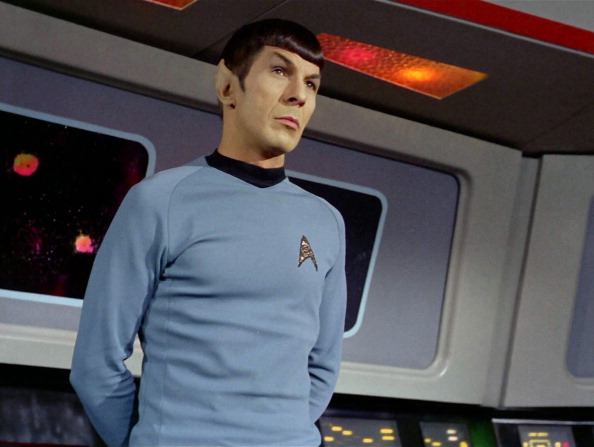 In Dec., 1967, Dick Keiner, the Warsaw Times-Union’s Hollywood correspondent, wrote, “You never know about fame. Like the measles it seems to strike unexpectedly, often in the strangest places. Currently, fame has come to Leonard Nimoy, old pointy-ears of Star Trek.”

Indeed it had. Flush in the midst of his career-defining turn as Mr. Spock on the original Star Trek series and, as Keiner noted, only a few short years removed from “getting up at 3 a.m. to deliver newspapers,” Nimoy’s Hollywood star was beaming up, so to speak, never again to fall back to Earth. Not bad for a character that only originally appeared on three seasons of a short-lived sci-fi series in the 1960s.

It’s such twists of fate that came to shape Nimoy’s life and legacy – the support of his grandfather, the only relative to endorse Nimoy’s acting dream as a child; his decision to pursue a role on a new TV show called Star Trek over one on the soap opera Peyton Place; and the enduring popularity of his most famous creation, Mr. Spock.

And it was Spock’s trademark phrase – “Live long and prosper” – that Nimoy shortened at the end of his final public message, capping a tweet sent on Feb. 23: “A life is like a garden. Perfect moments can be had, but not preserved, except in memory. LLAP.” Nimoy passed away today at age 83 at his Los Angeles home from end-stage chronic obstructive pulmonary disease.

Born on March 26, 1931 in Boston Mass., Nimoy’s first foray into acting came at age eight when he performed in local theatre productions. Thanks in part to his grandfather’s support Nimoy’s amateur theatre work continued into his teens and through to drama studies at Boston College.

He cut his college studies short to head to Hollywood in the early 1950s. At age 21 he was cast as an alien from another planet – though not Vulcan quite yet. Rather, he played a Martian called Narab who, like any alien invader worth their space boots in the post-Orson Welles War of the Worlds Hollywood, harboured some dastardly plans for Earth in 1952’s Zombies of the Stratosphere.

Army duty called soon after, and from 1953-1955 Sgt. Nimoy entertained troops by organizing theatre shows at his army base.

In 1954, before his Army service expired, he married actress Sandra Zober, with whom he had two children – Adam and Julie.

Following his military service Nimoy continued to pursue his acting career, appearing in classic TV shows including Perry Mason, Wagon Train, Dragnet, The Twilight Zone, Bonanza, Rawhide, The Untouchables, and Get Smart during the 1950s and early 1960s.

In the mid-1960s Nimoy had two television offers and a choice to make: one, a soap opera called Peyton Place, and the other, a quirky sci-fi space series called Star Trek.

His choice of the latter allowed him to live long and prosper (*ahem*) both on screen and off, turning him into a television star and earning him three Emmy nominations.

While the character of Spock is the one Nimoy is most closely associated with, his original run as the beloved Vulcan wasn’t always lined with fortune. Nimoy himself noted that he fell into alcoholism while working on the show, and a special effects explosion on set is believed to have caused both he and co-star William Shatner to suffer from ringing in the ears (tinnitus).

Once Star Trek wrapped, Nimoy found work starring on the Mission: Impossible series, and appearing in television series such as Columbo as well as the film Invasion of the Body Snatchers.

Nimoy performed a lot of narration and voiceover work, as well as voice and live appearances on shows as varied The Simpsons, Futurama, Saturday Night Live, The Big Bang Theory, and Fringe. Over the years the actor also performed regular theatre work.

When not on stage or screen, Nimoy studied photography at UCLA and received his master’s degree in Spanish. He published books of poetry and photography, created a comic book series called Primortals, released albums of famous covers songs, and wrote two autobiographies – I Am Not Spock (1975) and I Am Spock (1995).

In 1987, the same year he divorced Zober, he received high-praise for directing the comedy hit Three Men and a Baby.

In 1989 Nimoy married actress Susan Bay, who remained his wife until his passing. Nimoy’s two children and a stepson also survive him, along with his brother Melvin Nimoy, six grandchildren and a great-grandchild.