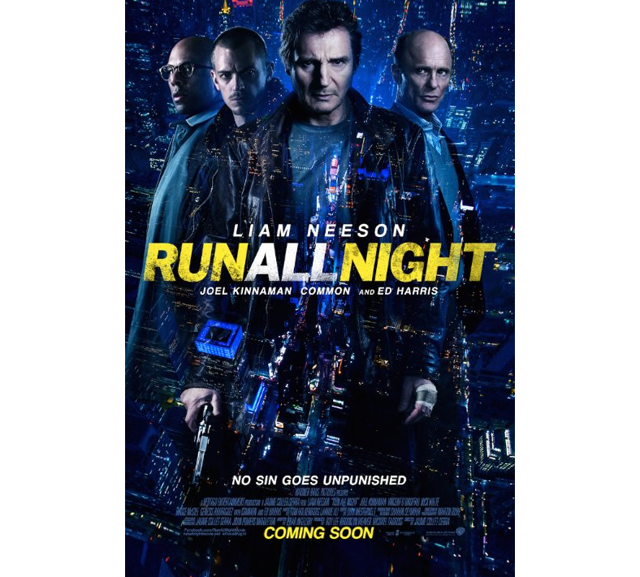 Genre: Liam Neeson (Yes, he’s his own genre now, like Shakespeare. When will bad guys learn to stop messing with his family? It NEVER ends well)

Choice Quote: “I’m the only one who ever cared about you. And all of that ended an hour ago when you killed my son.”

The Hype: Liam Neeson has to kill a bunch of people before they kill his family. If that sounds familiar, it’s because it happens a lot. But people pay to see it, so they keep making the films.

In Run All Night, directed by Jaume Collet-Serra, who directed two previous Neeson action films (Unknown and Non-Stop), Neeson plays Jimmy Conlon, an alcoholic former hit man whose family wants nothing to do with him. His only friend, mob boss Shawn Maguire (Harris), turns on him when Conlon kills his son (Holbrook) while protecting his own estranged son Michael (Kinnaman). From there Conlon’s forced to try to negotiate with his former friend while at the same time keeping his son and family safe from the legions of mobsters and cops hunting them down.

The Reality: Run All Night is a mixed bag of an action film. On one hand, the dynamic between Neeson and Harris is an entertaining one with two great actors playing men at the opposite ends of their respective ropes, the former desperate for a peace offering and the latter desperate to see his ex-friend suffer the same loss that he has. Neeson is a pro at these kinds of films, and Harris is almost always a sure bet for a solid performance.

Most of the film features the Conlon’s evading both the cops and Maguire’s mobsters – a seemingly impossible task except for the fact that the mobsters are so inept they can’t find an entire family huddled in a bathtub when searching their house, let alone two men hiding somewhere in New York.

The plot gets silly at times but it’s all in the chase, which Collet-Serra manages to keep suspenseful for most of the film. Vincent D’Onofrio as Detective John Harding, who’s pursued Conlon for years, and Common as Maguire’s hired assassin Mr. Price are both strong, if underutilized given their talent.

In the end though, it’s the Liam Neeson show. Powerful yet vulnerable, deadly yet hunted – he’s got the Liam Neeson genre down to an art form. If you’re a fan, you’ll enjoy Run All Night.

Can the grandkids see it?: Violence, murder, bad words – probably not a good idea.

Run All Night is in theatres Friday, March 13.