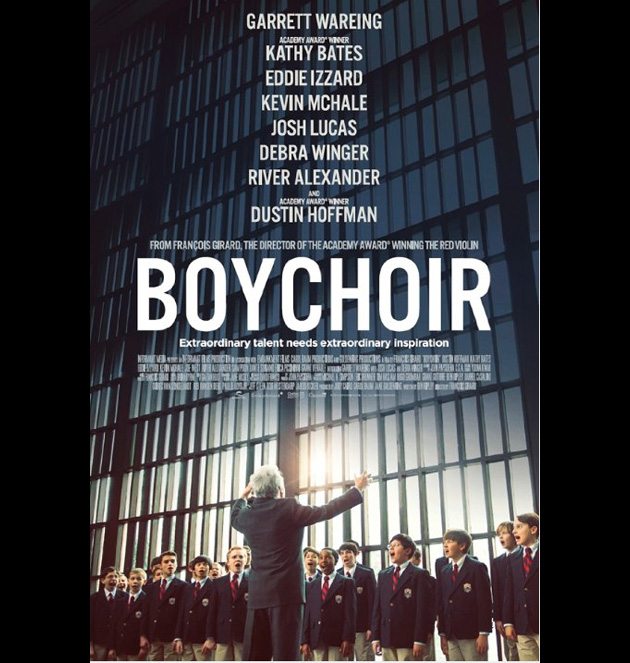 Strong performances and a simple narrative about a boy striving for personal redemption and the choirmaster who pushes him propel this film to its crescendo.

Choice Quote: “This isn’t about music. It’s about you.”

The Hype: Stet (Wareing), a troubled boy whose single mother dies tragically, gains acceptance to the prestigious National Boychoir Academy, where he falls under the tutelage of the hard-nosed choirmaster Carvelle (Hoffman) and his underhanded assistant Drake (Izzard). At the school he struggles to fit in with his more privileged peers while at the same time attempting to make the touring choir and play a concert in New York.

The Reality: Three years ago Dustin Hoffman made his directorial debut with Quartet, about a retirement home for opera singers. It was a solid effort but failed to live up to lofty expectations. In Boychoir Hoffman leaves the director’s chair and takes the lead. The result is music to our ears.

Hoffman is fantastic as the stoic choirmaster, neither sentimental nor forgiving as he drives his students toward excellence at his elite choir school. Meanwhile, Wareing’s small stature and short resume belie the massive talent this kid brings to the screen, holding his own against Hoffman, his fellow choirboys and during some tense solo scenes.

Kathy Bates and Eddie Izzard offer ample support, with the latter in particular perfectly suited to his scheming character. Glee’s Kevin McHale, as one of the choir teachers, offers an element of tenderness in an otherwise combustible environment, the supporting cast of choir boys shine musically as actors when given the spotlight and the underlying familial tension involving Stet’s biological father adds an element of intrigue to the film.

Boychoir, though, isn’t propped up on gimmicky storylines or suspenseful plot twists. Rather, strong performances combined with a simple narrative about a boy striving for personal redemption and the choirmaster who pushes him propel this film hitting to its crescendo.

Can the grandkids see it?: It’ll go over the heads of young kids, but patient teen viewers may enjoy it.

The Verdict: This is a beautiful film for fans who love subtle performances that hit the high notes when the time is right.

Boychoir is in theatres now.