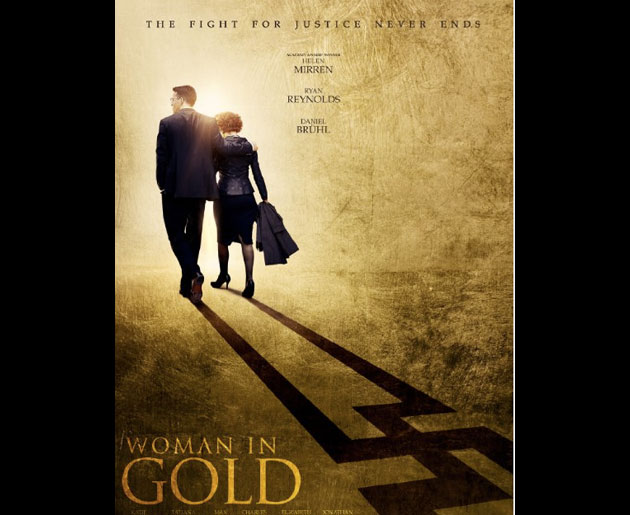 A movie about how the Woman in Gold was reclaimed, where the story of how it was stolen in the first place proves the most intriguing.

Choice Quote: “People see a masterpiece by one of Austria’s finest artists. But I see a picture of my aunt – a woman who used to talk to me about life. We should be reunited with what is rightfully ours.”

The Hype: The (mostly) true story of Maria Altmann (Mirren), an Austrian Holocaust survivor in her 80s whose aunt was famously painted by Gustav Klimt as the Portrait of Adele Bloch-Bauer I. Now living in Los Angeles, Altmann enlists the help of young lawyer Randol “Randy” Schoenberg (Reynolds) to help her reclaim the painting, which was stolen by the Nazis and then obtained by the Austrian government.

The Reality: “It’s essentially an odd-couple film of this woman and this younger man who go on this journey, with telling flashbacks through Maria’s eyes,” director Simon Curtis told me at his hotel in downtown Toronto the morning after a special Zoomer screening of the film. And he’s essentially right.

The drama of Altmann’s life story is more than suited for the big screen – she survived Hitler’s invasion by fleeing her homeland, only to return, hesitantly, decades later in an attempt to right a wrong done to her family by the Nazis.

The “odd couple” of Mirren, as the feisty and endearing Altmann, and Reynolds, as the young and clean-cut Randy, compliment each other nicely, even if the story does play out a little too neatly. That’s because the drama in this film doesn’t lie in Altmann’s quest to reclaim her family’s painting – everything goes pretty rather smoothly in that respect, give or take an attempt by the Austrian government to block her from getting near the painting.

Rather, as much as this is a movie about how Maria reclaims the painting, it’s the parts about how the Woman in Gold was stolen in the first place that prove the most intriguing.

Curtis insisted to me that this is not a Holocaust film. And it isn’t. Yet the flashbacks to Maria’s childhood and the charmed life her family lived, followed by the Nazi occupation and Maria’s escape, which is both heartbreaking and harrowing, prove the most powerful and interesting parts of the film. Maslany is brilliant as a young Maria – tender, brave, formidable. An added gift to Curtis is that she speaks German, offering further authenticity to her role.

In contrast to Maria and Randy’s court battles to get the painting back, the flashbacks boast moments of genuine tension, fear and heartbreak. As wonderful and charming as Mirren is as Maria, it’s Maslany I wanted to see more of.

One important thing to look out for: in the restitution conference scene, where Mirren’s Maria makes a speech about her family’s painting alongside a number of other survivors who had items stolen, the woman who gives a speech about the Nazis and her maid is a real survivor of the Austrian occupation. As Curtis told me, “That was a 96-year-old woman who had seen Hitler driving into the city.”

Can the grandkids see it?: It’s not for the little ones but teens may enjoy it.

The Verdict: Mirren is wonderful as always, but Maslany steals the show.

Woman in Gold is in theatres now.