Between the Lines … with Randy Bachman 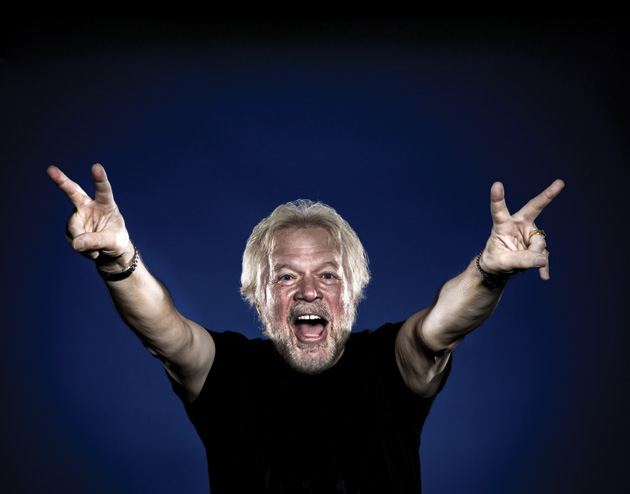 It’s a very select group of rockers whose songbooks include a slew of classic tunes – names like Lennon, McCartney, Simon, Dylan. Then, of course, there’s Canada’s own Randy Bachman, formerly of The Guess Who and Bachman-Turner Overdrive and currently heading the singularly named rock trio Bachman.

From “American Woman” and “These Eyes” to “You Ain’t Seen Nothing Yet” and “Takin’ Care of Business,” the 71-year-old Winnipeg native’s 50-plus year career has earned him the nickname “The Architect of Canadian Rock ‘n’ Roll.” Now, with Bachman and their new album Heavy Blues, the music legend attempts to reinvent his sound with an all-female band, guest musicians including Neil Young and Peter Frampton and a harder edge courtesy of Led Zeppelin and Iron Maiden producer Kevin Shirley.

“Neil Young [said], ‘You got a record deal. It’s time to do something different. Don’t do the same old thing and say it’s new Randy Bachman. Do something that’s really new. Get a different producer … who will push you and pull you beyond your stop sign.’

“Because you’ll go out and do a vocal or guitar track and say I’m great, that’s fabulous, [then] have dinner, watch Jeopardy and go to bed. But you need somebody to push you past that stop sign and pull you down a road and find things in you that you didn’t even value but that they think is great as a fan or as a listener.”

“When you get to a certain age you have experienced situations where you are broken – your heart, your mind, your soul – and you’ve also broken other people’s hearts and minds and souls. It’s a double-edged sword and when you live through that, you can either OD, you can go and be a hermit in the woods [or] you can face it head-on and go, ‘Screw this, I’m going to celebrate this and put it into my acting or painting or into an album and appeal to everybody else who’s going through these same changes.’

“My music has been the soundtrack of a lot of people’s lives. Maybe I can write some sort of anthemic thing that my fans will go, ‘Yes, he’s alive. Yes, he’s gone through that. Yes, we’re going through that right now. This song means a lot’ … Without the bad times, you don’t know what the good times are. You’ve got to have a couple of strikeouts and then you really appreciate hitting and getting on base. And if you get a home run you really appreciate that.”

“Canada is so different and so diverse, no two bands are the same. You try to compare the Barenaked Ladies to Rush to April Wine to Metric to Arcade Fire – there’s no comparison. Everything coming out of Canada is very exciting because the cities are so far apart. We all grew up in this wonderful era where our parents or grandparents were ethnic so that ethnic music was in our household growing up. And that influences your own music, plus everything else we’ve got in Canada.

“Me growing up in Winnipeg and being stuck there, and Neil Young being stuck there and everybody else there … on the late night airwaves listening to prairie radio at the top of the Great Plains, we would hear … all this blues and stuff. I had this little rocket radio that I would listen to at night with a little headphone in my pillow so my parents wouldn’t know I was awake and listen to this great music. That’s kind of what I went back to on this album. But that’s what I think Canadian music is like – every band is really individual and really exciting.”

“Being searched in an airport is not a thrill. Getting on the tour bus is not a thrill. But to walk out on stage and play the beginning of ‘American Woman’ or ‘Taking Care of Business’ or ‘These Eyes’ or maybe one of the new songs, because I haven’t done that yet, and get that roar from the crowd, that’s what it kind of is about. I’ve been junking on that since I was a teenager. That’s the adrenaline, that’s the drug of my choice – rock ‘n’ roll on stage and connecting with the crowd.”

Heavy Blues is available in stores and online April 14. Fro more with Randy Bachman, see the May issue of Zoomer magazine, on newsstands April 13.