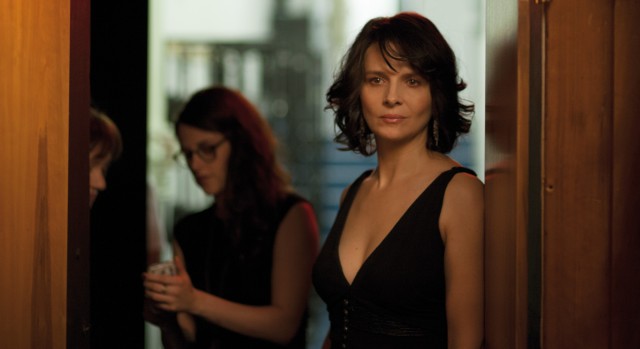 Set among the dreamy landscapes of the Swiss mountains, the contrast between Binoche’s anxiety-fraught performance and Stewart’s down-to-Earth realism makes for an engaging meditation on age and perspective.

Choice Quote: “I don’t like Helena, no matter what humanity you see in her. I don’t feel good in her skin … I’m Sigrid! I want to stay Sigrid!” – Maria (Binoche)

The Hype: Famed playwright and director Wilhelm Melchior dies as actress Maria Enders (Binoche) is preparing to remount a production of his play that made her famous 20 years earlier. At the time, Maria was 20 and playing the role of the younger character, Sigrid. In the remount she plays the older character, Helena, which challenges her to confront her own insecurities and fears about aging. These anxieties are also magnified by her relationship with her assistant, Valentine (Stewart) and the young actress who will play the role that made Maria famous decades earlier, Jo-Ann (Moretz).

The Reality: This was one of my absolute favourite films at TIFF 2014. Set among the dreamy landscapes of the Swiss mountains, the contrast between Binoche’s anxiety-fraught performance and Stewart’s down-to-Earth realism makes for an engaging meditation on age, self-worth, and perspective. Binoche completely sinks her teeth into Assayas’ script which, as TIFF’s CEO Piers Handling notes, came at Binoche’s request for Assayas “to write a deep and complex female role, and Assayas has responded with a film that is at once urgent and magisterial, delving into the female psyche through not just one but three women.”

Stewart, meanwhile, is something of a voice of reason while also sticking up for Moretz’s character – who’s both the star of big-budget Hollywood blockbusters and tabloid-fodder for the press –  a cheeky way of defending her own real-life career, launched into the stratosphere on the backs of tween Twilight fans.

This film deserves a much larger audience than it will likely receive with limited release and publicity. It also isn’t the type that attracts Stewart’s younger Twilight fan base. Though, to be fair, the most retweets and favourites I ever received on Twitter came at TIFF 2014 courtesy of Stewart’s tween fans, who appreciated my quip that KStew’s Clouds character and I both have the same hoodie, and she wears it better. Those fans likely won’t show the same enthusiasm for Clouds of Sils Maria, but you should. Because it’s fantastic.

Can the grandkids see it?: The themes and conflicts will go over their heads.

The Verdict: Daring, beautifully crafted and posing unique perspectives on aging, Clouds of Sils Maria should prove one of the year’s sleeper hits.