Popcorn Picks: Beyond the Reach 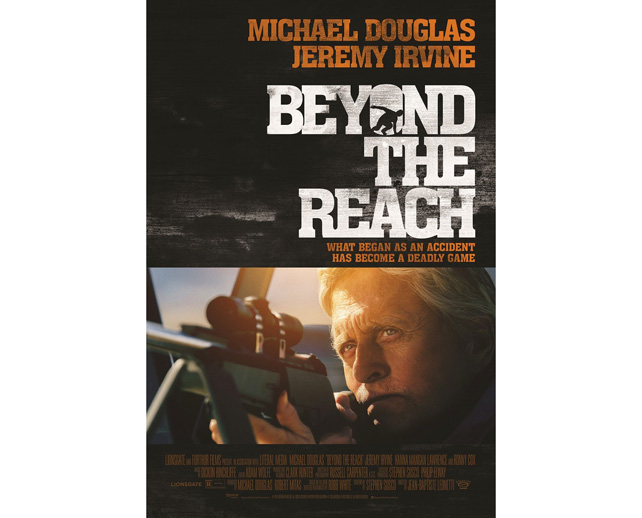 Michael Douglas as the obnoxious rich guy turned homicidal maniac is fun to watch – think Gordon Gekko in the desert with a high-powered rifle.

(Okay, maybe that’s not actually in the film…)

The Hype: A filthy rich L.A. business mogul named Madec (Douglas) drives his tank-like hummer to a small outpost town near the Mojave Desert, where he receives a special license (read: he bribes the sheriff) to hunt bighorn sheep before hunting season opens.

Ben (Irvine), an expert tracker still reeling from a breakup with his girlfriend, is called in to escort Madec into the desert for the hunt. Once out there, however, a trigger-happy Madec accidentally shoots a local he mistakes for a bighorn. A murder charge tends to put a damper on big business deals like the one Madec is close to closing, so he forces Ben to strip down and wander through the Mojave alone as he follows in his hummer, waiting for the only witness to the murder to die from the heat.

Ben, however, has a pesky habit of defying death, so the outing turns into a game of cat and mouse, with the desert-savvy youngster climbing into caves and crawling into secret dwellings in an attempt to escape from the heavily-armed Madec.

The Reality: The ending aside, this is a fun movie for those who just want to see a few bullets fly and not have to think very much. That last point is key, as if you start to think too hard you’ll wonder how, when the film’s trailer notes the desert “exceeds 130 degrees” and that “without water … the average man will die within 60 minutes,” Ben doesn’t drop dead of dehydration an hour in.

But who are we to let science get in the way of a film plot? The movie itself actually proved more intriguing than I expected, including multiple instances when it seemed Ben had finally outsmarted his pursuer only for Madec to find ways to cut Ben down to size.

Douglas as the obnoxious rich guy turned homicidal maniac is fun to watch – think something like Gordon Gekko in the desert – especially the visuals of him mixing a martini at the bar in the back of his massive hummer as he listens to classical music waiting for Ben to die. Irvine is believable as Ben, the sun-burned tracker on the run, though the romance storyline between he and his ex-girlfriend was unnecessary and formulaic. It’s the ending, though, that’s my big complaint with this film.

It’s one thing to suspend your disbelief to accept that this kid didn’t die in his first hour in the desert, or some of the other craziness Madec and Ben get up to. The final 20 minutes or so of the film, however, lost me. I won’t spoil it for you, but let’s just say the movie stayed out in the sun just a little too long.

Can the grandkids see it?: It’s not a kid flick.

The Verdict: Not the most thrilling flick you’ll see this year, but bad guy Michael Douglas keeps it (mostly) fun while it lasts.