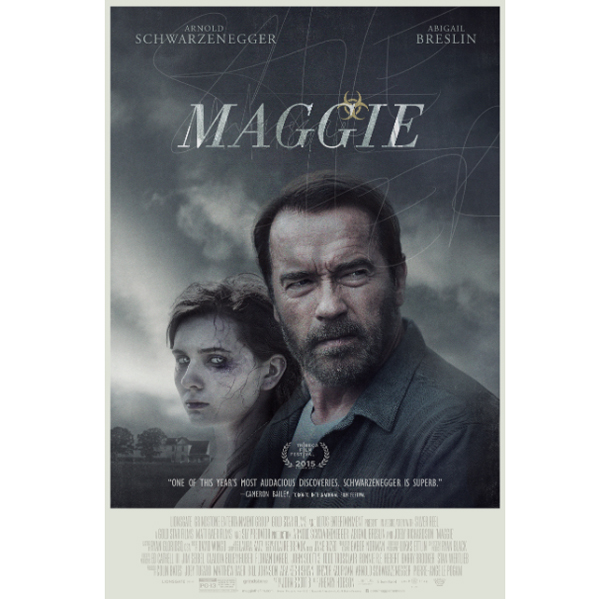 Think about how you felt when they took Old Yeller behind the barn, or picked off Bambi’s mom. Then imagine those weren’t part of a bigger film that kept you emotionally invested. That’s Maggie.

The Hype: In lieu of a plot summary, I offer a fictionalized version of how I imagine the pitch for this film went down:

STUDIO BOSS: So basically it’s a zombie movie starring Arnold Schwarzenegger where he goes around killing all the zombies with cool guns and crazy explosions?

PITCHMAN 1: No, this is different. We’re going to have him wear flannel and play a good ol’ down home Midwestern father whose daughter, Maggie, is infected with the zombie virus during an outbreak.

STUDIO BOSS: And then Arnold’s character goes out and gets revenge by killing all the zombies with cool guns and crazy explosions?

PITCHMAN 2: Weeeeell, not exactly. In fact, there’s barely any action. Arnold will simply comfort his daughter as the disease slowly and horrifically consumes her body, along with any chance viewers might have for a redeeming message.

PITCHMAN 1: And we’re filming it in a dreary tone that will make people leave theatres questioning humanity itself and why we live in such a dark, cruel world.

STUDIO BOSS: So this film offers no action, no redeeming message, revolves around tragedy and is carried by the quality of Arnold Schwarzenegger’s dramatic acting? I don’t see how this could possibly go wrong!

The Reality: Let me start by saying that I can appreciate that, despite what his upcoming slate of films suggests, Arnold can’t play the Terminator or Conan the Barbarian forever. He’s got to branch out into more dramatic or comedic roles. And his acting isn’t even that bad in this film. In fact, it’s far more subtle and nuanced than I expected. However, Arnold in a zombie movie that both doesn’t feature him kicking much undead butt and is also perhaps the most depressing film I’ve seen in years is too much.

The basic premise of the film is intriguing, with a virus turning living people into zombies as opposed to the same old idea of the dead rising up. But the execution is plodding and depressing with an unsatisfying result. Allowing the same storyline to play out in a city, or more populous town, where the social implications of such an event could be examined in more depth, would have added far more interest and poked a few holes in the veil of sadness that hangs over this movie.

Instead this film boasts no real thrills, no scary zombie interactions – which, to be fair, I can accept as a conscious choice to separate the film from traditional zombie flicks – and very few stakes to be raised. After all, even the film’s trailer makes it clear that there isn’t some rush to find a miracle cure, or some antidote that could cure the virus. Maggie is turning into a zombie. It’s a matter of when. And while Arnold, as her father Wade, struggles with the decision to protect or kill her, it just doesn’t offer enough impact to move viewers.

It should be noted, however, that Abigail Breslin is wonderful as Maggie – a teenager trying to live as normal a life as possible while her body is consumed by a disease that causes even her family to flee, while authorities push for her incarceration in an inhumane quarantine unit. But one great performance from Breslin and a good one from Schwarzenegger aren’t enough to lift the dark cloud of depression that hangs over this film.

Can the grandkids see it?: It’s not for the little ones.

The Verdict: Think about how you felt when they took Old Yeller behind the barn, or picked off Bambi’s mom. Then imagine those scenes weren’t part of a bigger film that kept you emotionally invested. That’s Maggie.