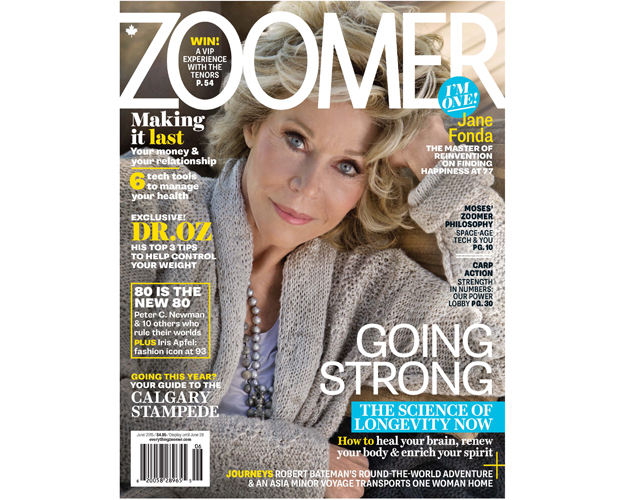 I started our Jane Fonda cover shoot in L.A. with blood running down my face.

Our shoot location was a beautiful house with expansive glass walls in the Hollywood Hills we rented for the day. And the owners of this magnificent home kept those glass walls crystal clear and smudge-free – all the better to see the vista of the city below, I suppose – because not even five minutes in the building, talking on my cellphone, I walked right into one of those glass walls, resulting in a tiny cut to my forehead and sizeable bruise to my ego for such an idiotic mishap.

I spent the rest of the day – including meeting the legendary Jane Fonda – with a giant white plastic bandage across my forehead.

Ms. Fonda, the consummate professional, made no comment but got down to getting the shoot done.

Arriving in a salmon-coloured jogging suit – the kind you would find any 77-year-old wearing out to the mall – she was charming, if not surprisingly shy, and looked a bit diminutive.

But it was startling to see the transformation once she walked out in front of photographer Tony Duran’s camera. And that chameleon effect did not come from her having her hair and makeup done or the striking white pantsuit she was now wearing – there was simply just an aura about her.

She first arrived, huddled in her hoodie tracksuit, she was practically demure. But now in front of the camera, her movements were languid and feline.

As I watch her, the way she sat back in a chair, legs crossed, head thrown back and chin regally jutting out – I realized I was experiencing a rare moment.

I was watching a living legend in motion.

And shedding some blood just seemed like the right price to pay for such a rare treat.