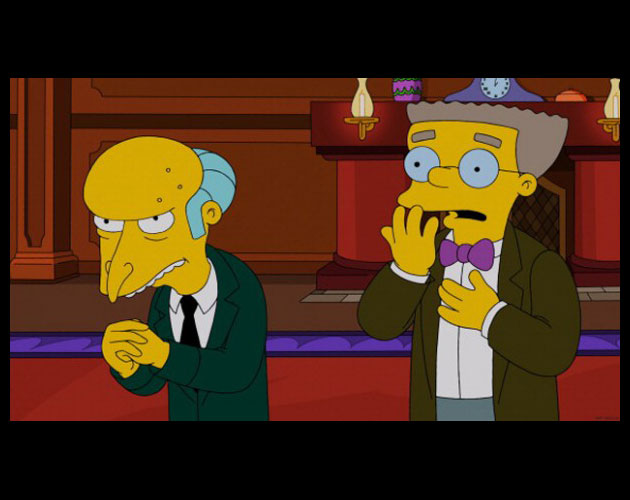 Mr. Burns gives his employees high-tech eyeglasses in order to spy on them in the 'Specs and the City' episode of THE SIMPSONS. (Photo by FOX via Getty Images)

With the possible departure of Simpsons voice actor Harry Shearer, we look at some of the best quotes from one of his most famous characters

The fate of Springfield’s oldest, richest and most evil resident, Charles Montgomery Burns hangs in the balance as the actor who voiced him on the animated sitcom The Simpsons, Harry Shearer, has reportedly left the show.

According to CBC, the 71-year-old, who also voices popular characters such as Ned Flanders and Principal Skinner, parted ways with the show over contractual reasons that had to do with his ability to pursue work outside of the show. They also note that the characters will be recast, though it’s unclear how prominent a role they’ll play moving forward.

As far as the consequences within Springfield, the news is particularly distressing when it comes to Mr. Burns who, at approximately 104-years-old, has survived the Second World War, a point-blank shooting and a medical condition known as Three Stooges Syndrome. This isn’t the first time he’s endured a change of voice actors (late actor Christopher Collins voiced the character during the show’s first season in 1989-1990, while Shearer took over in 1990 and played the role for 25 years), but with the show recently passing the quarter-century mark and now losing one of its principle cast members, the future looks more uncertain.

Given that Mr. Burns has no grandchildren, we also worry that he’ll never have a chance to pass along the wisdom he’s gathered in his century-plus on this planet. As such, we’ve collected some of Burns’ best advice on everything from business acumen to looking on the bright side of life in the hopes that, even if his prominence does slowly fade, his archaic and dastardly outlook on life will live on.

How to succeed in business without really caring

“I’ll keep it short and sweet: family, religion, friendship – these are the three demons you must slay if you wish to succeed in business.”

And to prove his point…

[Reading a medical form he’s filling out] “‘Cause of parents’ death?’ They got in my way.”

SMITHERS: “Sir, the people kind of see you as an ogre.”

MR. BURNS: “I ought to club them and eat their bones!”

No matter how successful you are, always stay humble

Forgive and forget. Or, don’t.

When it comes to the environment, don’t listen to all of those so-called “scientists”

“Oh, so Mother Nature needs a favour? Well maybe she should have thought of that when she was besetting us with droughts and floods and poison monkeys! Nature started the fight for survival and now she wants to quit because she’s losing. Well I say ‘hard cheese.’”

Stay in shape. Even if you’re a billionaire

Always be big enough to own up to your actions

“Fine, I’ll admit it. I had Amelia Earhart’s plane shot down. That hussy was getting too big for her jodhpurs.”

All work and no play make Monty a dull boy

“Fun? Is that how it’s pronounced? I’ve only seen it written.”

And no matter what, always look on the bright side

DOCTOR: Mr. Burns, I’m afraid you are the sickest man in the United States. You have everything.

MR. BURNS: You mean, I have pneumonia?

DOCTOR: A little bit, yes. You also have several diseases that have just been discovered in you.

MR. BURNS: I see. You’re sure you just haven’t made thousands of mistakes?

DOCTOR: No, I’m afraid not.

DOCTOR: Well, you’d think so, but all of your diseases are in perfect balance. If you have a moment, I can explain. Here is the door to your body. And these are oversized novelty germs. That’s influenza, that’s bronchitis … Here’s what happens when they all try to get through the door at once. [Impersonates the Three Stooges] Move it, chowder head! We call it “Three Stooges Syndrome.”

MR. BURNS: So what you’re saying is I’m indestructible.

DOCTOR: Oh, no, no. In fact, even a slight breeze could …

MR. BURNS: [To himself, proudly] Indestructible.