How To Quit Your Late Night Talk Show 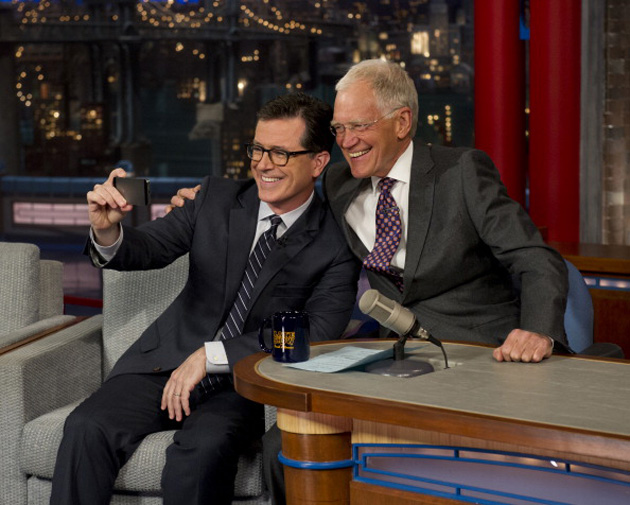 So you’ve decided to quit your late night talk show. Or maybe the network simply pulled the plug five weeks into your run. Don’t be ashamed. It happens – right, Chevy Chase? The point is, you’re signing off and you want to ensure your exit is memorable.

For most, Johnny Carson’s Tonight Show finale is the gold standard of late night send-offs – a long lead-up full of touching tributes and tearful serenades that culminates with the host, alone on stage, thanking the crowd for three-decades of support and memories. It’s classy, poignant and memorable.

Everyone who’s come along since would love the King of Late Night treatment. David Letterman – whose 33 years as a late night host eclipsed even Carson’s tenure – has received about as close to that as one can get, from the fawning guests to the emotional goodbyes leading up to tonight, when he hangs up his mic for good.

Still, regardless of whether you’re the longest-serving late night host in television history or, well, Chevy Chase, there are five important rules to follow to bring your late night show to a dignified, noteworthy end.

This is key. People need a reason to miss you when you’re gone. That’s why no one remembers The Pat Sajak Show. No one watched it to begin with.

By contrast, Carson left as the King of Late Night and Leno topped the ratings both times he retired from The Tonight Show. The result: people cared when a watery-eyed Carson said his final goodbyes, or when a choked up Leno confessed, “The first year of this show, I lost my mom. The second year, I lost my dad. Then my brother died. After that I was pretty much out of family, and the folks here became my family…”

Letterman, meanwhile, isn’t winning the late night ratings war. But the genre’s slow devolution into a showcase for celebs to play ping pong and lip sync to famous tunes – the very shift that helped edge Letterman out from behind the desk – also served to further highlight Dave’s creative and groundbreaking contributions to the late night field.

As far as the respect of his fans and peers, as well as his influence and standing in the annals of broadcasting, Letterman’s leaving as close to the top as anyone since Carson.

2. Have An Exit Strategy

Late night departures don’t have to be maudlin affairs. Steve Allen and Jack Paar – the first and second hosts of The Tonight Show – both left the gig to star in their own prime-time programs. Craig Ferguson abdicated the Late Late Show desk to return to stand-up comedy and host Celebrity Name Game while Jimmy Fallon and Stephen Colbert each took a promotion to the 11:35 p.m. time slot. All of these folks seemed genuinely happy with their decisions because they went out on their own terms and had a foundation laid for their post-late night existence.

It only becomes sad, in a sentimental way, when hosts retire with no plans to return to the public eye (see: Carson and Letterman) or sad, in a miserable way, when someone gets cancelled. The former is bittersweet. The latter is depressing.

Just ask Mike Douglas. In 1980, ratings for The Mike Douglas Show had fallen, the distributor dropped him, he got picked up by a different company, they repackaged the entire show and then, eventually, cancelled it for good. Or Joan Rivers, who jumped to FOX to challenge Carson via The Late Show with Joan Rivers, then got beat in the ratings handily, clashed with executives and was fired less than a year later.

Perhaps the best exit strategy came courtesy of the legendary (and often underrated) Dick Cavett, who hosted multiple shows on multiple networks, but always called the program The Dick Cavett Show. It’s like exiting without really exiting. He pulled this off from 1968 to 2007.

3. Leave the Bitterness Behind

When talking his less-than-ideal exit from The Tonight Show, Conan O’Brien hilariously noted, “I hosted [my last] Tonight Show on a Friday, and on Monday I’m in a Marie Callender’s pie restaurant and my assistant has a laptop and … there are two other customers in the place, you know, stabbing at a pie at 11 in the morning … And that kind of summed up the madness a little bit of that time.”

When you don’t leave late night on your own terms, bitterness can set in. Chelsea Handler exited Chelsea Lately, on the E! Network, when her contract ran out, then hooked up with Netflix and made her feelings known about her former employers: “It’s such a different relationship than with E!; it’s nice to be involved in a show where I do respect their opinions. It’s like going out with a guy that you’re proud to be seen with.”

Or Arsenio Hall who, despite his early success, was cancelled twice – the second time while prepping for an upcoming season. He tweeted: “I dreamed that they picked up my show for Season 2, then changed their minds and canceled the show. Had to be a dream.”

But as Letterman, who famously fell out with NBC after he was passed over for The Tonight Show, and O’Brien eventually proved, when you can move on from the bitterness (or, in Letterman’s case, make the bitterness part of the act) big things can happen – including new, successful late night franchises on different networks.

People may not remember what you wore on your final show, or who you interviewed, but they always remember a great musical sendoff.

Bette Midler’s serenade of Johnny Carson, crooning “One for My Baby (And One More for the Road)” set the standard, but other hosts have kicked it up a notch for their final shows. Stephen Colbert signed off from The Colbert Report with a rendition of “We’ll Meet Again” that featured a slew of celebrity cameos including everyone from Bryan Cranston to Katie Couric to Patrick Stewart to Cookie Monster and Big Bird. Conan O’Brien rocked out with Neil Young on his final Tonight Show, Craig Ferguson performed “Bang Your Drum” by Dead Man’s Fall with accompaniment from Betty White, Pierce Brosnan, Julia Louis-Dreyfus and others while Leno saw everyone from Oprah to Carol Burnett to Jack Black join in on a rendition of The Sound of Music’s “So Long Farewell.” Tonight, Letterman has reportedly arranged for his favourite band, the Foo Fighters, to play him off – a performance we predicted a month ago.

And, if you don’t have a great musical guest lined up, make sure you…

5. Have a Memorable Final Line For Your Fans to Remember You By

Johnny Carson: “I can only tell you that it has been an honor and a privilege to come into your homes all these years and entertain you. And I hope when I find something that I want to do and I think you would like and come back, that you’ll be as gracious in inviting me into your home as you have been. I bid you a very heartfelt good night.”

Jay Leno: [Through tears] “I want to thank you — the audience. You folks have been just incredibly loyal and — this is tricky. We wouldn’t be on the air without you people. Secondly, this has been the greatest 22 years of my life. I am the luckiest guy in the world. I got to meet presidents and astronauts and movie stars. It’s just been incredible.”

We don’t know what Letterman will say before he leaves the Ed Sullivan Theatre for good. Chances are it won’t be overly sentimental or emotional. Like any good last words, they should truly be your own.

And speaking of last words, that brings us to ours: Thank you, Dave, for all the years and all the memorable moments. We hope your retirement is filled with as much laughter as you brought us the last 33 years. God bless.