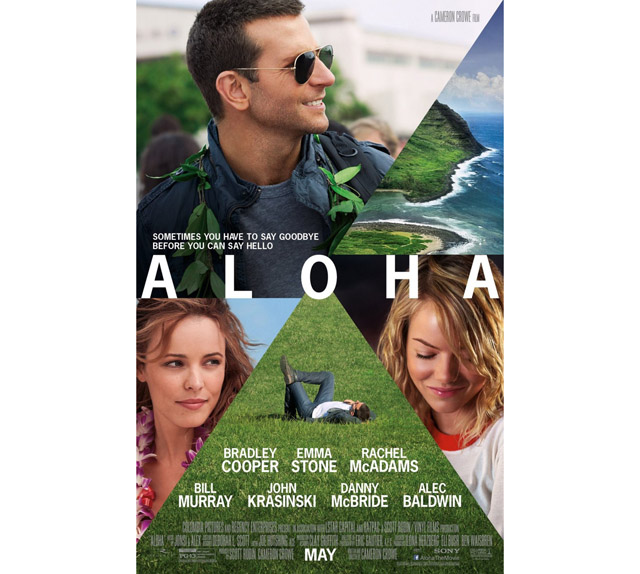 From the man who brought you Fast Times at Ridgemont High, Almost Famous and Jerry McGuire comes Aloha, a film that isn’t as good as any of them.

Choice Quote: “The future isn’t just something that happens. It’s a brutal force with a great sense of humour that’ll steam roll you if you’re not watching.”

The Hype: If you loved Cameron Crowe films like Fast Times at Ridgemont High, Almost Famous and Jerry McGuire, that’s great. Aloha isn’t remotely as good as any of them.

The Reality: Cooper plays Brian Gilcrest, a military defense contractor who returns to his old Hawaiian stomping grounds to help launch a satellite for a company headed by filthy rich Carson Welch (Murray). While there he bumps into his old flame Tracy (McAdams), who’s married to mute military man John (Krasinski), as well as Captain Ng (Stone), an eager young fighter pilot tasked with escorting Gilcrest around the island.

The plot is somewhat vague – Gilcrest is tasked with negotiating with Hawaiian elders (including an actual Hawaiian leader named Dennis “Bumpy” Kanahele) to allow Welch’s company to build on their land. Welch doesn’t really trust him because he’s a rebel who goofed-up on their last job in the Middle East, while it’s clear Gilcrest has some issues of his own from that past mission that transforms him into the “jerk with a heart of gold” type. You know the ones – they act like they aren’t interested in a girl who’s falling for them, they refer to themselves using terms such as “lone wolf,” which no actual loner would ever really say, they lash out one too many times and eventually reveal they’re capable of falling in love.

Anyway, the satellite is just the beginning of Welch’s plan and the problems facing both the Hawaiian people and this film as a whole. The tension between Gilcrest and his ex Tracy is unclear – are they hoping to get back together? Is she angry at Gilcrest? Does he want her back? Is it all of the above?

Stone, meanwhile, is fine as the eager young recruit Captain Ng, while Murray as Welch walks a confusing line between evil industrialist and goofy, comedy film bad guy. Baldwin as the cantankerous General is probably the most fun character, though that’s not saying much in a movie that’s as confused about where it’s going as the audience is.

Toward the end the film veers sharply, hitting cliché after cliché like pylons on a driver’s ed course. It’s disappointing given Cameron Crowe’s reputation as a writer/director and what he’s capable of when at his best, especially with a cast as talented as this.

While there are a few good lines and some genuine laughs, Aloha ultimately left me asking the same questions I did after watching Crowe’s 2001 flick Vanilla Sky: “What was the point of that film, and where can I buy more sour gummies?”

Can the grandkids see it?: It’s not for the little ones.

The Verdict: Every filmmaker, including Crowe, is entitled to a bad film once in a while. We’ll give him a pass on Aloha and hope for vintage Crowe the next time out.