Popcorn Picks: Inside Out 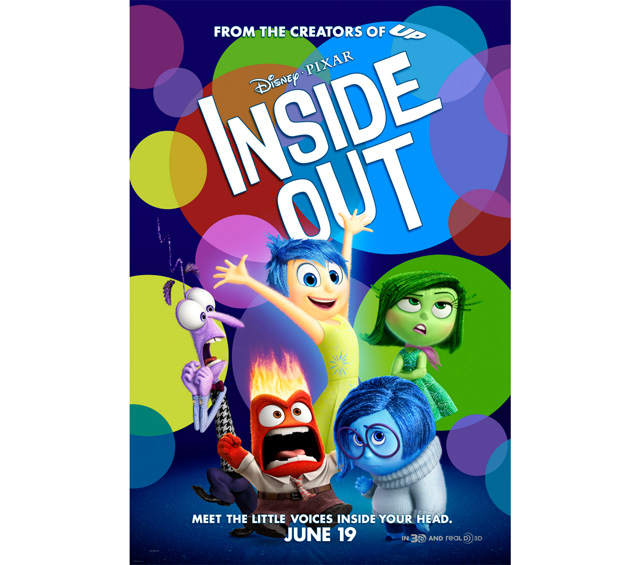 A film so funny and touching it’ll make even Sadness smile.

The Hype: An A-list comedic cast combined with Disney Pixar’s knack for producing modern children’s classics results in the biggest animated film of the year.

The Reality: This animated children’s film had our audience both howling with laughter and crying real tears. Impressive, considering there were barely any kids in the theatre.

Yes, grown men and women wept over the plight of these strange, colourful little emotions – Joy (Poehler), Sadness (Smith), Anger (Black), Disgust (Kaling) and Fear (Hader) – and their adventures inside the head of a young girl named Riley (Dias), who’s struggling with her family’s move from Minnesota to San Francisco.

The audience emotion derives from the fact that this film represents the best of a Disney formula that dates back to the casting of Robin Williams in 1992’s Aladdin: producing a film with two sensibilities running side by side – one aimed at kids and one at the grown-ups who bring them – that converge at that apex of hilarity and happy endings.

The key to this film is creativity, evident in the entire world we discover inside young Riley’s head. It starts at the aptly-named Headquarters, where the five key emotions govern the young girl’s day-to-day interactions. From there the film explores the pillars of personality – from family to hobbies to “goofball” childhood innocence – dreams, memories, trains of thought and even Riley’s long-forgotten imaginary friend Bing Bong (Kind). It’s the kind of detail that the kids appreciate because of the adventure happening within, while the adults marvel at the ingenuity of it all.

Meanwhile, you’d have to go back a long way to find a finer comedic quintet anchoring a movie. Poehler and Kaling are, indisputably, two of the funniest people in showbiz and are perfectly cast as Joy and Disgust respectively. Add Kaling’s former Office cast mate Phyllis Smith as the lovably melancholy Sadness, Poehler’s former SNL cast mate Bill Hader as the perennially cringing Fear and the hilariously grumpy Lewis Black as Anger and you really can’t lose. The emotions are replicated inside the heads of other characters in the film too, which means for a day or so after the film you’re going to be imagining these tiny, colourful little characters behind the eyeballs of everyone you come in contact with.

And it’s appropriate that, in a film that revolves around emotions, the movie itself runs the gamut from comedy to tear-jerking drama. You’ll need a tissue or two – don’t try to be a hero and assume they’re just for the kids.

If the film had a knock against it, it’s that the 3D aspect didn’t play much of a part in the presentation. If you can save a few bucks by seeing it in 2D, you aren’t missing out on much. But do see this film, whether you have the kids/grandkids with you or not. It’s funny and touching enough to make even Sadness smile.

Can the grandkids see it?: It was made for them. They just need you to pay for it.

The Verdict: Anger, Sadness, Fear and Disgust all play a part, but it’s Joy you’ll leave with in the end.

Inside Out is in theatres now.