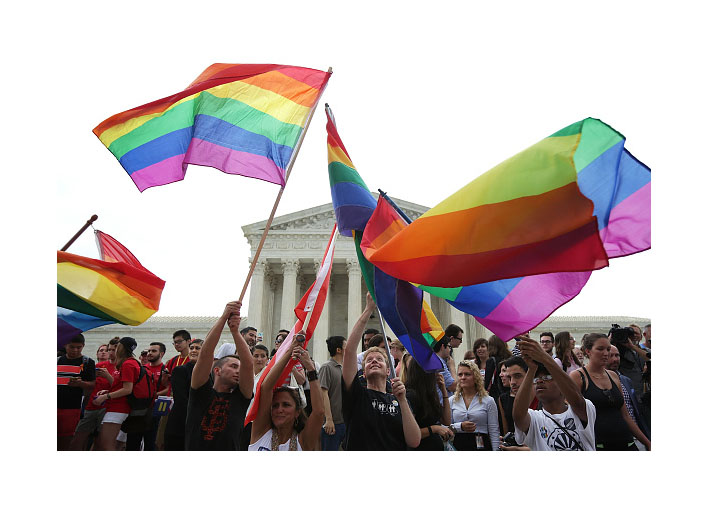 It’s an historic crescendo to Pride Month celebrations going on across North America. And of course, whenever something socially relevant occurs, what we all really want to know is what celebrities think about it.

The U.S. Supreme Court (SCOTUS) legalized same-sex marriage across all 50 states earlier today, an historic crescendo to Pride Month celebrations ongoing in cities across North America. And, of course, whenever something socially relevant occurs, what we all really want to know is what celebrities think about it.

For those curious stargazers, read on for what some rich and famous boomers have to say about the SCOTUS decision on social media (Spoiler: they’re all really happy about it):

Judy Bloom: “Thanks to the SCOTUS Five! Wish I were in Key West right now to celebrate w/@equalityfl. But I’ll celebrate in Madison, Ct @rjjulia w/editor”

Hillary Clinton: “Proud to celebrate a historic victory for marriage equality—& the courage & determination of LGBT Americans who made it possible.”

Anderson Cooper: “Supreme Court rules right to marriage is a ‘fundamental right’ and same sex couples can’t be deprived of that right”

Harvey Fierstein: “You never realize how heavy your burden’s been until you lay it down in the promised land.”

Al Gore: “#MarriageEquality for all is a right. I applaud today’s historic #SCOTUS decision.”

Sean Hayes: “What’s better than a supreme taco from Taco Bell? The Supreme Court of the United States. Thank you for making marriage legal for EVERYONE today. Best birthday gift ever.”

Billie Jean King: “Equality For All!”

Cyndi Lauper: “Finally. Big step. All Americans, no matter their sexual orientation, can marry the people they love.”

Sir Ian McKellen: “Congratulations, particularly to those who made the case for equality.”

And in May, when an Irish referendum legalized same-sex marriage in that country, McKellen spoke with Zoomer and (sort of) predicted today’s Supreme Court decision, “I suppose [Canada’s influence] will eventually spread down to the whole of America, and that’ll be a good thing. And on we go.” Read the full story here.

Liza Minnelli: “I have always said that everyone has the right to love who they love and today, with the historic decision from the Supreme Court, I am so happy it is now the law of the land.”

Federal NDP Leader Tom Mulcair: “Today’s #SCOTUS decision is a resounding victory for equality over discrimination― and an even bigger win for love. #LoveWins #LoveIsLove”

Rosie O’Donnell: “WITH LIBERTY AND JUSTICE FOR ALL ! #gaymarriage #LoveWins #SCOTUS #KaliefBrowder”

Wanda Sykes: “I am overwhelmed with joy! It’s feels good to be an American in all 50 states! There’s still more to do, but I’m celebrating today! #LOVE”

George Takei: “My eyes shine with tears as marriage equality is ruled the law of the land. What a pride weekend it shall be!”

Ontario Premier Kathleen Wynne: “A momentous day. The US Supreme Court has ruled that same-sex couples have the right to marry in all 50 states. #PrideTO”

What’s your take on the US Supreme Court ruling? Take our poll here!