Picturing Nuclear War: Camera Atomica at the AGO 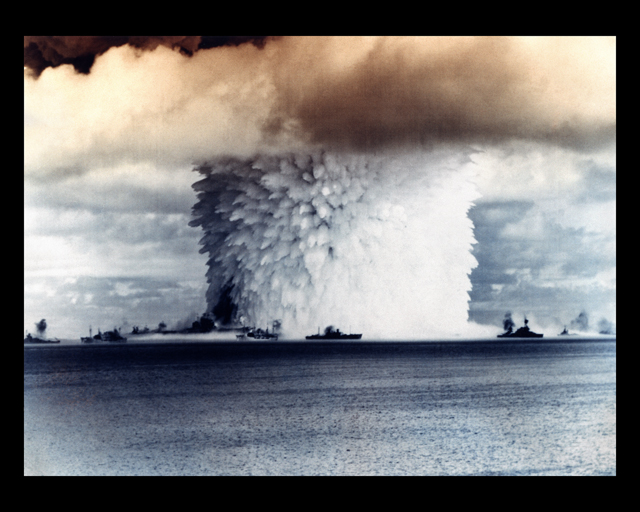 Like postcards from history, a reminder of the utter decimation humanity is capable of.

It goes without saying that there’s nothing pretty about nuclear war and its aftermath, whether you experience it mere minutes after an atomic bomb lands in the street, as photojournalist Yoshito Matsushige did, or within the neatly curated walls of an institution like the Art Gallery of Ontario, which are more accustomed to playing host to works from the Baroque to Basquiat.

But sometimes it’s those unthinkable, brutal images that prove the most vital – like postcards from history, a reminder of the utter decimation humanity is capable of at its worst. Camera Atomica offers that reminder.

The AGO’s latest exhibit traces the history of nuclear energy and warfare through photos captured by journalists, scientists and ordinary citizens from the 1940s to present day. And what a horrifying history it is.

Separated into three sections, the exhibit tells the tale chronologically through images from the sites of the blasts, be they split-second frames of a mushroom cloud taken by research scientists or the first ever photos of nuclear disaster, shot by photojournalist Yoshito Matsushige who, 10 minutes after the atomic bomb levelled Hiroshima, rushed into the street to shoot five photos of the tattered, near-lifeless remains.

In fact, all of the sites made famous by their connection to nuclear disaster/controversy are represented. Hiroshima. Nagasaki. Three Mile Island. Chernobyl. The New Mexico Desert. Elliot Lake. Fukushima.

Some photos tell the stories of the survivors and their scars while others tell those of the lonely, bare remains. There’s also a significant number depicting anti-bomb protests over the years, along with art created and inspired by nuclear disasters. The AGO even reconstructed a fallout shelter, similar in style to those that once adorned Toronto’s neighbourhoods, that recounts Canada’s role in the history of nuclear development.

But perhaps most striking is the juxtaposition between the American and Japanese depictions of the Hiroshima and Nagasaki bombings that brought the Second World War to a screeching halt. On one side of the room you have images of the destruction of the Japanese landscape and the suffering and death toll that accompanies it. Directly opposite, actual periodicals from the time period that celebrate the American accomplishment of not only flexing their nuclear muscle successfully, but also winning the war.

As a whole, Camera Atomica is a far cry from a breezy afternoon gallery jaunt. On the contrary, the exhibit proves powerful, disturbing and at times unimaginable. And at a point in history when tensions between heavily-armed global superpowers are prone to flare at the tip of a hat, that’s exactly what makes it so necessary.