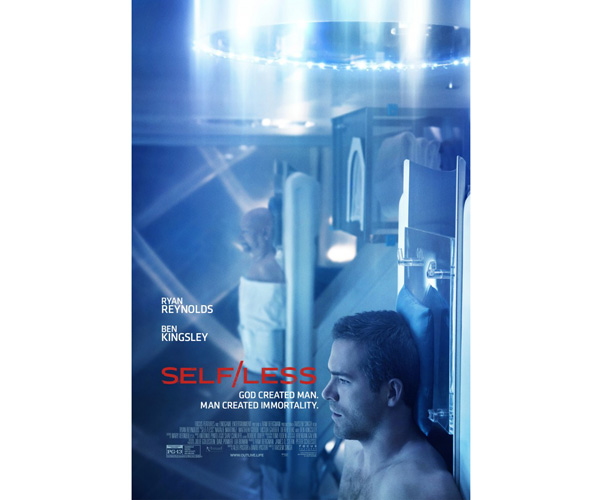 A sci-fi thriller where the “sci” part is questionable and the term “thriller” is a bit of a stretch. Still, it’s more fun than that sounds.

Choice Quote: “People will insist that your buildings make you immortal. Now, as you slip away, do you feel immortal?”

The Hype: When billionaire builder Damian Hale (Kingsley), referred to as “the man who built New York,” is diagnosed with terminal cancer, he seeks to ensure his immortality via a controversial treatment called “shedding,” in which his consciousness is transferred into the body of a young man (Reynolds). The procedure is a success but gets complicated when the consciousness of the donor body begins to emerge, causing flashbacks to his original life and family. When Damian decides to seek out the donor’s family, he discovers the grim secret behind the shedding process. As a result he becomes a target of the shedding company, which wants to eliminate him before he reveals their secret.

The Reality: Another recent entry into the “fountain of youth” genre – alongside the likes of Transcendence and The Age of Adeline – the main issue with this sci-fi thriller is the “sci” part. Though the science of “shedding,” the central focus of the film, is fiction, there’s no real explanation as to how it’s supposed to work. Even Frankenstein attempts to explain the science of its story: sew together some body parts, insert a brain, jolt it with some electricity and voilà!

In Self/Less, Damian has a screen placed over his face, he’s given an injection to stop his heart and is then inserted into what looks like a massive CT Scan machine. The donor body is next to him and inserted into its own machine. Then parts of each machine spin really fast and the bodies are pulled out and consciousness is somehow transferred. Ta-da! They may as well have inserted the “ding” of an oven timer to signify when it was over. Virtually all we’re told about the process is that all metal (fillings, replacement joints, etc.) must be removed from the body or else the process doesn’t take. Because, you know, science.

Aside from that massive logic gap, Self/Less is actually more fun than I expected it to be. Ben Kingsley is great for the short time he’s in it and Ryan Reynolds picks up the slack when his turn comes. It’s convenient, given the shoot-and-chase portion of the film, that the body that Damian transfers into was once a member of the U.S. Army and thus is well versed at hand-to-hand combat and gun fights. The rest of the cast holds their own, with Matthew Goode in particular standing out as the morally-twisted Dr. Albright, the scientist who pioneered shedding.

The story offers some interesting twists and turns, including an ending that’s pretty clever if not a little sappy. There’s nothing really bad about the film per se, aside from the lack of “scientific” explanation, but it’s not the most thrilling film you’ll see this year either. It’s a fun few hours if you’ve already seen the major releases of the season.

Can the grandkids see it?: It’s probably not quite enough action for teens, but you can try.

The Verdict: A sci-fi thriller where the “sci” part is questionable and the term “thriller” is a bit of a stretch. Still, it was more fun than I expected. You may want to wait to watch on demand though.

Self/Less is in theatres today.