Popcorn Picks: What We Did On Our Holiday 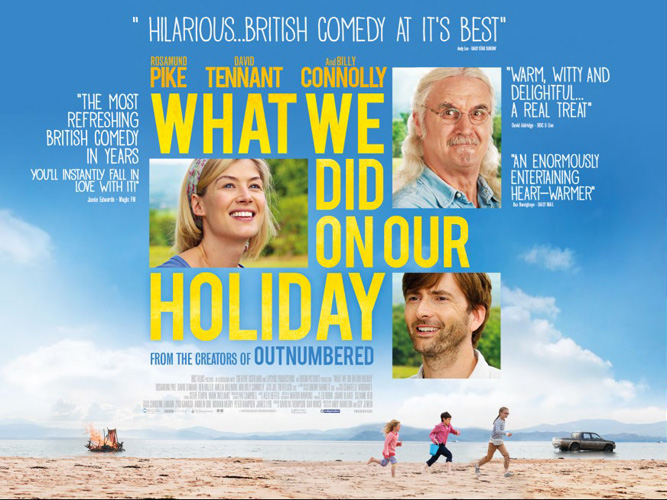 Not only one of the best comedies, but one of the most original and enjoyable films you’ll see all year.

Choice Quote: “The truth is, every human being is ridiculous in their own way. So you shouldn’t fight because, in the end, none of it matters. None of this stuff.”

The Hype: Doug (Tennant) and Abi (Pike) are in the midst of divorcing and at each other’s throats, but they haven’t told their extended family. So when they pack up the kids and travel to Scotland to celebrate Doug’s dad Gordie’s (Connolly) 75th birthday, they attempt to put on a brave face. The kids, however, have a tough time keeping their parents’ secret under wraps. Meanwhile, Gordie reveals a secret of his own – he’s got terminal cancer.

The Reality: Without a doubt, WWDOOH is one of the funniest, most quirky films I’ve seen in a long time. Which is weird, considering it’s a film centered on a man dying of cancer and parents getting divorced. Writer/directors Andy Hamilton and Guy Jenkin assembled a cast that exhibits such natural chemistry that it’s easy to forget they aren’t actual family. And the mix of absurd wit and improvisation among the actors brings a welcome levity to weighty subjects like a terminal illness and divorce.

Tennant and Pike are pitch perfect playing off each other as a couple in the midst of a nasty divorce. And Billy Connolly is exactly what you’d expect as a grandfather – loveable, funny and adored by the grandkids for his ability to toss inhibitions aside to squeeze the most out of his remaining time.

Speaking of the grandkids, they prove the true stars of this movie. Far from being cast as generic cute kids used to delivering an adorable one-liner, Jones, Smalldridge and Turnbull play a major part in this film. Not only are they genuinely funny but all three, the oldest of which, Jones, is only 13, completely hold their own in scenes with their adult co-stars, improvising many of their scenes with the precision of a performer multiple times their ages.

The key to this film, however, is the unique way this family gathering and the serious issues surrounding it are approached. From the originality in the writing to the freshness of the humour to the quality of the performances, WWDOOH raises the bar for family comedies to come.

Lastly, the most fascinating fact about the film is that before shooting began, Billy Connelly was diagnosed with prostate cancer. Being that he was playing a character with terminal cancer, he decided not to tell anyone involved with the film about his real life diagnosis.

In a recent interview, Connolly told me about how it felt to act out the scene in the film where his character reveals his cancer to his granddaughter while no one around him knew he actually had it in real life. To read that interview, click here.

Can the grandkids see it?: Little ones won’t get the humour but teens should have a laugh.

The Verdict: Not only one of the best comedies, but one of the most original and enjoyable films you’ll see all year.

What We Did On Our Holiday debuts at Varsity Theatre in Toronto and Fifth Avenue Cinemas in Vancouver on Friday, July 10. Wide release to follow.