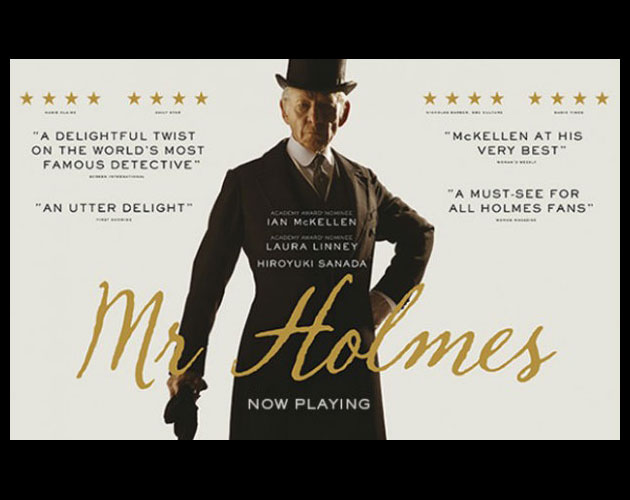 An engrossing and memorable take on the man from 221B Baker Street….

Choice Quote: “Death, grief, mourning – they’re all commonplace. Logic is rare. And so, I run on logic.” – Sherlock, Mr. Holmes.

The Hype: A 93-year-old Sherlock Holmes, long retired and tending to his apiary at a farmhouse along the coast of southern England, is compelled to solve his final case before he dies. The only problem is that his memory is fading and the details from thirty years ago are foggy.

The Reality: A refreshing addition to the Holmesian lexicon, Mr. Holmes is an engrossing and memorable take on the man from 221B Baker Street, depicting both Sherlock’s life as a local celebrity as well as an elderly man struggling with declining health and the unfinished case that haunts him.

In my recent interview with Ian McKellen, the star reinforced the idea that this film is really about a man, “simply trying to survive and trying to hold onto his memories and discovering himself.” That the man just happens to be the world’s most famous sleuth is icing on the cake.

McKellen is masterful as he tackles two versions of the Holmes character in the film – one in his 60s, who is seen during flashbacks to his final case and the nonagenarian Holmes of present day – both of which see him completely embody the meticulous, logic-fuelled spirit of the famed super sleuth.

In Mr. Holmes, Sherlock’s trusted friend Watson takes on the Arthur Conan Doyle role as the man who recorded all of his cases for public consumption. As a result Holmes became a celebrity around London in his day. However, people often don’t recognize Sherlock in person because he doesn’t brandish the deerstalker hat and famous pipe he became known for through stories and film (this is a clever nod to real life and the fact that Holmes was only ever depicted with that likeness on stage and screen, but never in the original tales). Instead, he dresses like a proper English gentleman, complete with three-piece suit and top hat – the picture of English elegance.

However it’s one of Watson’s stories, the final one in fact, that propels this narrative. In the story Holmes, like every mystery before it, solves the case and saves the day. But the real Holmes knows that’s not how it happened – that he actually failed to solve the case – though he can’t remember how or why.

Watson’s long since passed away so the feeble Holmes – his voice coarse, his bones aching with every measured step – makes the arduous journey to Japan to seek out an herb known as prickly ash, said to aid in keeping one’s wits sharp. And then he works desperately, each day, to attempt to trigger far-flung memories from the recesses of his fading memory.

Ian McKellen is perfectly cast, infusing Holmes with both a delicate humanity and, really, a deeper heroism than we’ve known in many past Sherlock tales. Here his nemesis is not a diabolical Dr. Moriarty but rather his own rapidly fading mind. And his motivation reaches beyond attempting to solve a mystery to setting the record straight about his final case, preferring the truth over accepting the false heroism bestowed upon him by Dr. Watson.

Laura Linney as Holmes’ housekeeper and the young Milo Parker as her child/Holmes’ faithful companion both completely hold their own alongside McKellen, while the rest of the supporting cast do wonderful jobs as well.

Director Bill Condon, meanwhile, creates two distinctly stunning worlds in the film – the magical Victorian London of Holmes’ final case and the picturesque seaside landscape of his later years – captivating scenery, as if McKellen and company are acting within an oil painting.

Can the grandkids see it?: Teens and older may enjoy it.

The Verdict: Elementary my dear reader – McKellen’s aging, heroic Sherlock is one of the most inventive and entertaining depictions of Holmes since Arthur Conan Doyle retired his pen.

What did you think of the film? Leave a comment below or tweet our film reviewer at @MikeCrisolago.