Popcorn Picks: A Walk in the Woods 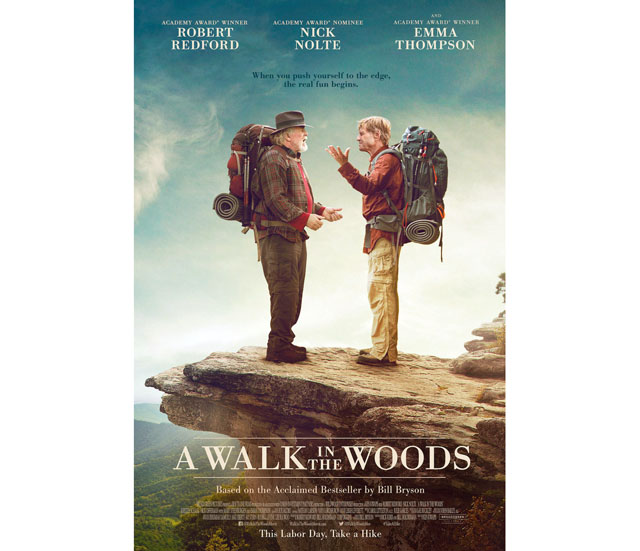 An outdoors odd coupling that offers a light-hearted, introspective take on the idea of pushing the limits of aging.

The Hype: Based on the book by best-selling travel author Bill Bryson, the film follows Bill (Redford) and his old travelling buddy Stephen Katz (Nolte) as they attempt to stave off the rigours of age and the routine of daily life by hiking the famed Appalachian Trail.

The Reality: What’s that old travel idiom: it’s the journey, not the destination, that counts? Ironically, the opposite is true for this film: you may not appreciate the journey through traffic, or the long lines and sticky floors at the theatre concession stand but the destination – your seat for this film – will prove well worth it.

A light-hearted, introspective take on the idea of pushing the limits of aging, Redford, at 79, plays a man roughly 20 years younger than him and does so in convincing fashion. He’s spry, in shape and absolutely believable. Then there’s Nick Nolte – in real life he’s five years younger than Redford but he looks quite a few years older. He’s out of shape, rough around the edges and, upon first glance, the last person you’d imagine hiking through the backyard let alone the Appalachian Trail. But that’s the heart of this film — an outdoorsman odd couple comedy rife with pratfalls, one-liners, romance and onlookers who assume the trail will eat these two alive.

The Verdict: As noted above, this film is rooted in real life. It’s almost a shame that it’s not full fiction though, as Redford and Nolte’s odd couple would almost certainly have fans making the journey back to the theatre for a sequel.

See it in theatres or on demand?: Theatres.

A Walk in the Woods is in theatres now.