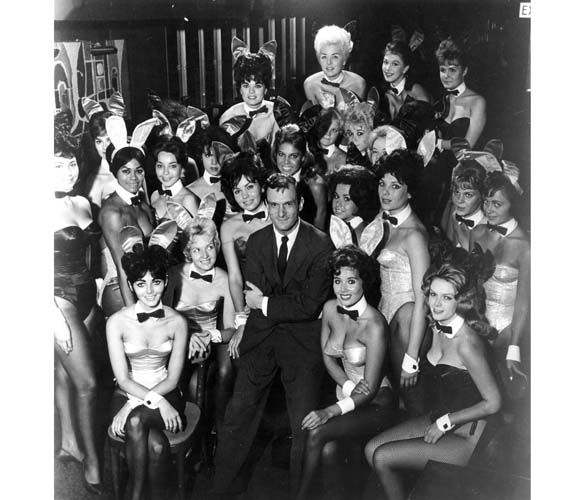 We’re about to find out how many people really do read Playboy for the articles — a number that could spell disappointment with a double-D.

Look under the average teenage boy’s mattress today and what will you find? Lint? Some dirty laundry? Perhaps a Ziploc bag containing a little “herbal relief?” One thing you won’t find is a copy of Playboy magazine – once the go-to publication for a generation of teen boys overcome by their own curiosity and raging hormones (okay, mostly their raging hormones).

In 2015, the wired generation is coming of age in a world where nude images are only a Google search away, which means the days of young boys sneaking a peek at their dad’s Playboy collection, or making the discreet and hastened walk of shame to the convenience store to pick up their own copy, are long gone.

Now, in a move that reeks of irony, given that the proliferation of pornographic images online can be traced in large part to the bunny book’s taboo-shattering early publications, the legendary men’s mag announced that it will cease publishing nude images beginning in 2016 — news that, for some longtime devotees, will no doubt spell disappointment with a “double D.”

The magazine paints its reasoning as evolutionary. Scott Flanders, CEO of Playboy Enterprises, said, “The political and sexual climate of 1953 … bears almost no resemblance to today. We are more free to express ourselves politically, sexually and culturally today, and that’s in large part thanks to [Playboy founder Hugh Hefner’s] heroic mission to expand those freedoms.”

So the question remains: why would anyone pick up a copy of Playboy that only contains provocative, yet PG, photos? Apparently the articles are great – or so says every man who was ever caught by an angry mother or spouse with a copy of the mag. But, as the Canadian Press noted, “Playboy’s print circulation, once measured in millions, is now about 800,000.”

That means either the articles aren’t so great, or maybe all those men were buying it for other reasons. Playboy’s website, meanwhile, stopped publishing nude images last year and the traffic reportedly increased dramatically, so perhaps there is hope in the more covered version of the brand.

In recent years, Playboy has become far better known for the merchandising of its famous bunny logo on everything from cigarette lighters and shot glasses to underwear. In 2005 it extended its reach into the world of reality TV, catching the eyes of a new generation with the hit series The Girls Next Door — which documented the lives of Playboy founder Hugh Hefner’s many girlfriends, as well as Hefner himself, inside the Playboy Mansion. The series ran until 2010.

Of course, the magazine was noted for its celebrity interviews as well as its journalism and high-profile literary contributors – everyone from Margaret Atwood to Vladimir Nabokov. And it broke ground in other areas besides nudity, such as that fact that it began publishing a Braille edition in 1970. And a number of the world’s most famous and recognizable women graced its cover over the years, from Marilyn Monroe as the inaugural Playmate to names like Jayne Mansfield, Suzanne Somers, Farrah Fawcett, Cindy Crawford, Kate Moss and even Marge Simpson. But today, when celebrities desire to publish nudes as a publicity stunt, they can find a suitor among the slew of print and online publications available quicker than you can say, “Kim Kardashian.”

At it’s peak, Playboy sold more than seven million copies of its November 1972 issue, with a cover graced by model Pam Rawlings. It was a time when, according to Wikipedia, “One-quarter of all American college men were buying or subscribing to the magazine every month. Next year, with a dwindling readership and its bunnies no longer bare, it’ll be interesting to see how many people really do buy the magazine for the articles.