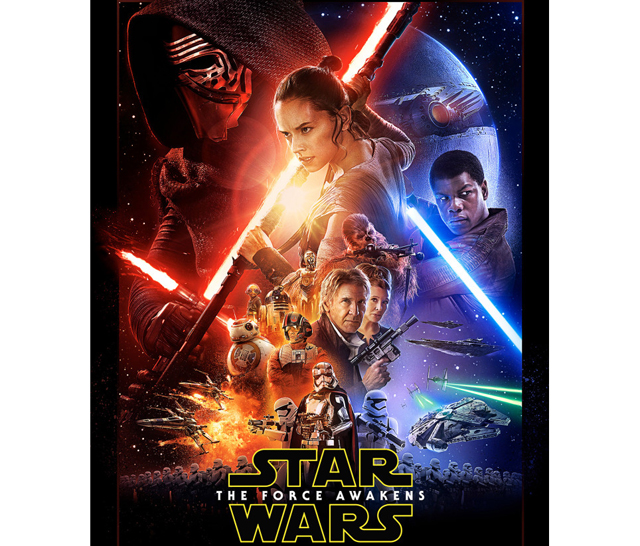 The force is strong with this one…

Unless you’ve been trapped under a rock somewhere in the Outer Rim, you heard all the hype about the first full length trailer for Star Wars: The Force Awakens, which debuted during ESPN’s Monday Night Football broadcast earlier this week to a massive audience. And we do mean massive.

According to the Los Angeles Times, the game “was the most-watched program on television Monday, attracting an audience that averaged 13.9 million viewers over the course of the evening.” The audience reportedly peaked at close to 16 million viewers in anticipation of the trailer at halftime.

Not only that, the film’s website noted that, “In just 24 hours, the trailer was viewed online more than 112 million times. That’s 128 million times globally in a single day!”

Meanwhile, the Hollywood Reporter news from the Great Wall of China, where, “500 Stormtrooper figures were arranged in marching formation on the steps leading up to one of the Wall’s guard towers. Disney also handed out hundreds of red and blue lightsabers and other merchandise.”

And now, as of today, the film has officially shattered previous records for advance ticket sales ahead of its Dec. 18 release.

“Websites slowed, crashed, and became one with the Force,” a message of thanks to fans read on the film’s site today. “Incredibly — but not surprisingly — you set numerous records, including the biggest-ever 24 hours for advance sales in numerous countries. In the UK, more than 200,000 tickets were sold in the first day. In Norway, you braved subzero temperatures overnight to make sure you were among the first to see the film. Fortunately, there are still plenty of tickets to be had for opening weekend and beyond.”

On the home front, “Movie theatres are adding new show times, and researcher BoxOffice.com is forecasting a $215 million opening-weekend box office in the U.S. and Canada,” the Toronto Star reported, “a new high for any film.”

And as Entertainment Weekly pointed out, “advance ticket sales for the film were eight times as large as the sales for the previous record holder, The Hunger Games.”

Does the trailer above have you polishing off your light saber in anticipation of Star Wars: The Force Awakens? Let us know whether you plan to see the film in the comments section below or tweet the author at @MikeCrisolago.