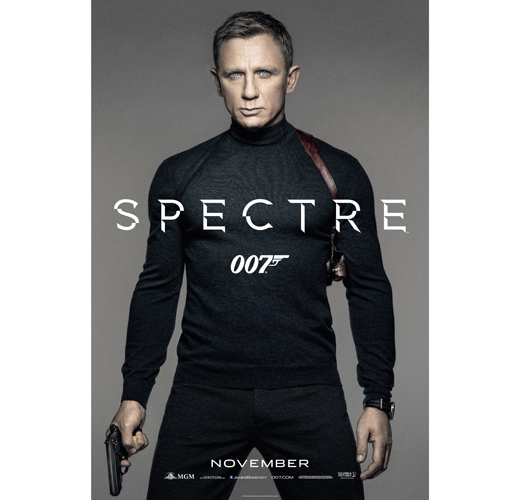 Adrenaline-fuelled action scenes, picturesque landscapes and an enviable roster of talented performers — Spectre has everything except the storytelling, which drags down an otherwise fun film.

The Hype: James Bond is back, in all of his tuxedo-wearing, martini-drinking, gun-shooting, lady-smooching glory. This time, he’s up against the global terrorist organization known as SPECTRE and its diabolical leader Ernst Stavro Blofeld (Waltz), bent on forcing the major nations of the world into unknowingly submitting to his global surveillance program via a series of calculated terrorist attacks.

If that wasn’t enough, back in London a Joint Intelligence Service merger could spell the end of the “Double-O Program” that employs Bond and his ilk. Somehow, I can’t picture Bond going from international spy to working traffic stops with fellow members of London’s finest.

The Reality: I’m sorry to say that this film left me neither shaken nor stirred. And it seems like I’m not the only one. From its 60 per cent rating on the review aggregating site Rotten Tomatoes to negative reviews in publications from The New York Times to The Hollywood Reporter, Spectre largely fails to impress.

It’s strange, given this is the same director and writing team behind Skyfall, the last Bond film, which many praise as possibly the greatest Bond film ever. And yet here we are, watching as 007 leaps into his 24th adventure for Eon Productions – at once the most expensive and longest Bond film in history. What does Spectre have to show for it? To start, there are some really fun, explosive, vertigo-inducing fight and chase scenes which Bond largely manages to navigate without popping a button or stitch on his custom Tom Fords.

The scenery is breathtaking too – from Spanish parades to late-night romps through Rome, the mountains of Austria and the majesty of a train ride through northern Africa. And the talent can’t be questioned – from Craig to the brilliant Christoph Waltz to Léa Seydoux and the severely under-utilized Monica Bellucci, not to mention series regulars Harris, Fiennes and Whishaw. Even pro wrestler turned Hollywood muscle Dave Bautista is completely believable as the monster henchman Mr. Hinx. Unfortunately, it’s the writing that drags 007 down here.

Spectre’s plot lulls and formulaic perils lead at best to predictable outcomes and at worst to romance that borders on camp. And yes, I realize that part of the franchise’s charm is its campiness. Or it was, at least, in the past. But, with Craig in the tux, the Bond franchise has undergone a reboot – larger, tougher, brooding and decidedly less campy – and Spectre, like the three films before it, lays the groundwork for something bigger. So far the Craig films have served as, in many ways, one long origin story. That trend continues as new layers of Bond’s life and background are peeled away.

If the story of the recent Bond films can be told through their theme songs, then Skyfall lived up to the gravitas and drama of its Oscar-winning title track, performed by Adele. Spectre, meanwhile, lives up to its theme, “Writing’s on the Wall,” by Sam Smith. Like the song, it will make a lot of money and prove a commercial success (though unlike the tune, no one says it sounds a little too close to Michael Jackson’s “Earth Song”). But while everything on the surface of Spectre seems primed for a great showing, in the end, like with Smith’s theme, we wind up with an overly-sentimental, not-quite-as-exciting-as-we-hoped 007. This Bond’s bark is worse than his bullet.

The Verdict: More James Bland than James Bond, Spectre doesn’t live up to its predecessor, Skyfall. It’s rumoured that this could be Craig’s last turn sipping dirty martinis in a tuxedo. Hopefully he returns for one final 007 flick. He’s proven one of the better Bonds and it’d be nice to see him get one more run at it.

See it in theatres or rent it? Theatres. It’s still James Bond, after all.

Spectre is in theatres today.