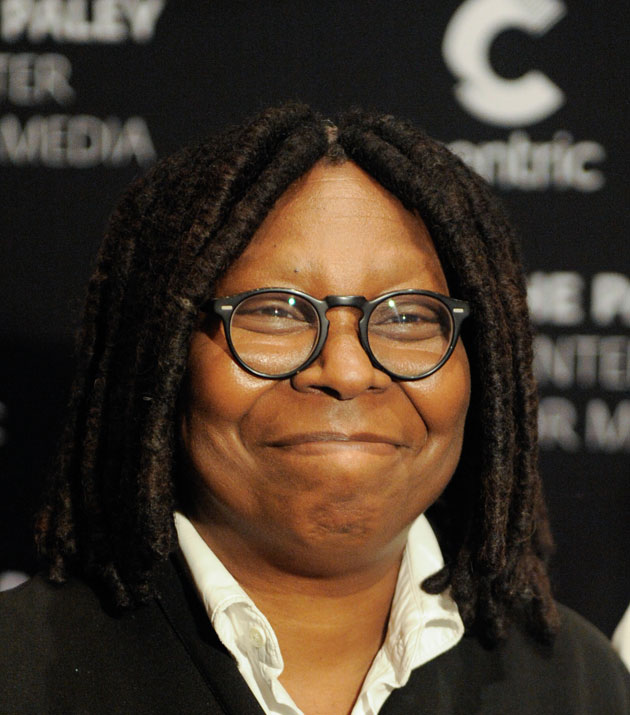 Ten things to know about Whoopi Goldberg as she turns 61 years young this month (Nov. 13).

2. She is one of only 12 people who have won the EGOT—all four major annual American entertainment awards in a competitive, individual (non-group), category: the Emmy, Grammy, Oscar, and Tony. She was the the tenth winner, the first winner to win two of the EGOT awards in the same year, and the first African-American winner.

3. When she made her Broadway debut in 1984, she refused to divulge her real name—Caryn Elaine Johnson.

Instead, the New York Times reported this story she gave to explain the name “Whoopi Goldberg.”

“Some seven years ago, she was wandering around near the San Diego canyon where she lived, and she saw a burning bush. At that time, she had a normal name … but the bush, which had started talking to her, didn’t think much of it. Said the bush, apparently with a Yiddish accent, ‘Your name is boring but have I got a name for you!’ And what was that name but Whoopi Goldberg.”

4. She has a 42-year-old daughter, Alexandrea “Alex” Martin, whose father is Alvin Martin, Whoopi’s first husband.

6. Her third and last marriage to Lyle Trachtenberg ended after a year, in 1995. She’s also had relationships with Frank Langella and Ted Danson.

7. Goldberg’s latest book, published last month, is titled If Someone Says “You Complete Me,” RUN!: Whoopi’s Big Book of Relationships.

8. She advises, “After a certain age you’re not going to get pregnant, go get laid!” Also, she’s says that what’s romantic is “someone who can have a conversation with you, laugh with you, tell the truth. (Just) Don’t ask questions you don’t want the answers to.”

9. Her career isn’t slowing down in her 60s. She’s the moderator of the popular TV show The View. She also has her own production company, One Ho Productions.

10. She’s passionate about ice skating and loved to go ice skating in Central Park with her brother. “I always wanted to be in the Ice Capades,” Goldberg told Variety, which named her one of its five 2015 Power of Women New York.

“I was a great skater. I was a speed skater.” But she said never remembers seeing any black ice skaters on TV. Goldberg is now an honorary chair of Figure Skating in Harlem, a nonprofit that helps young girls learn leadership and academic skills through the sport.