POLL: Is A Joke Ageist if a 67-year-old Comic Legend Tells It? 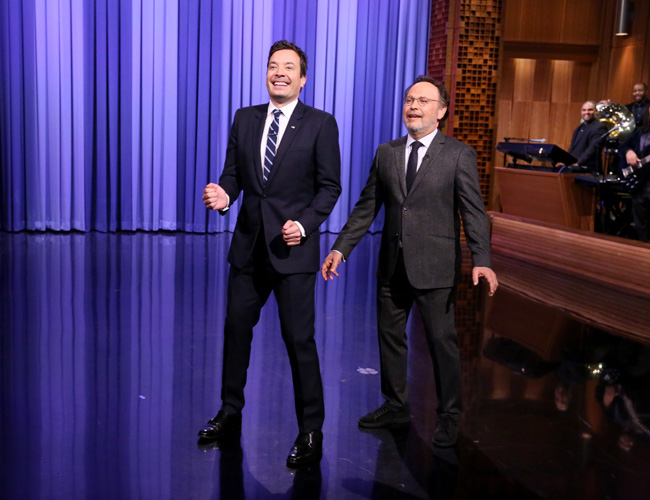 Here’s the thing about comedy – it’s subjective. One person’s gut-busting one-liner is another person’s offensive slight. But while we all have different opinions in that regard, when it comes to age-related humour the gags tend to get old – pun intended – real fast.

That’s because they often fall along the same tired themes – senility, feebleness, being out of touch with current trends, anything to do with prune juice and walkers and yelling at kids to get off the front lawn. Yawn.

In 2015, boomers in their 60s and 70s are landing roles as the leads in romantic comedies and buddy films at a far higher frequency than any time in Hollywood history, which makes the portrayal of seniors as frail little old ladies and grumpy old men borderline archaic (except, ironically, for the film Grumpy Old Men, which was hilarious).

And that fact is precisely why a monologue on The Tonight Show last Thursday, seen in the video above, caught my attention. It began with host Jimmy Fallon discussing supposed worry among U.S. Democrats that “a lot of people are saying that Bernie Sanders (74) and Hillary Clinton (68) might be too old to be president.

“And it’s true,” the host said, moving into a routine poking fun at the ages of both candidates. “Bernie Sanders is so old that he needs 12 Viagra to go up in the polls.”

A few seconds later, Fallon feigned a problem with his throat and “tagged in” a partner to help him with the monologue. That surprise guest turned out to be 67-year-old comedy legend Billy Crystal.

Crystal continued where Fallon left off, with quips like “[Sanders is] so old that he thinks a trickle-down theory is about him urinating,” “Hillary is so old, when she hears ‘2016’ she yells ‘Bingo!’” and “[Hillary’s] so old her first political scandal was deleting all of her telegraph messages.”

Fallon returned to the stage and delivered the line “Hillary’s so old, she’s not running for president, she’s mall walking for it,” which led to both comedians depicting seniors walking around a mall for exercise before Crystal left the stage.

Now imagine, for a second, Fallon had handled all of the quips himself. At 41-years-old, it’s not difficult to envision older fans watching at home decrying the use of ageist stereotypes by a young host to lampoon two presidential candidates solely on the basis of their age.

After all, today’s seniors are active, strong, stylish and an ongoing force for change in their communities. It’s not unreasonable to think that they may be offended by being portrayed as incontinent, impotent, bingo playing mall walkers.

So, then, does Crystal’s age – he’s a year Clinton’s junior – in turn dull the offense of the same stereotypical quips?

Perhaps it also depends on the type of joke. Mall walking and bingo playing are more or less benign pastimes, but poking fun at health issues that affect numerous seniors could be viewed as crossing the line.

And while Clinton herself has made jokes about grey hair in the White House, let’s not forget that she also made headlines with her appearance on Saturday Night Live a few weeks back, thrilling an audience both in studio and at home made up of a primarily youthful demographic. And speaking of that youthful demographic, at times this year they’ve offered strong shows of support for both Clinton and Sanders, which continues to this day.

Ageism, then, may simply transcend whoever utters the joke and fall flat on its face simply because the targets aren’t mall walking, incontinent old fogies at all. In fact, these two older candidates are actually helping to mobilize a younger demographic that is often (and sometimes unfairly) accused of being overly apathetic when it comes to politics.

Sure, that may be the reality, but it sure makes for a boring and accurate late night monologue.