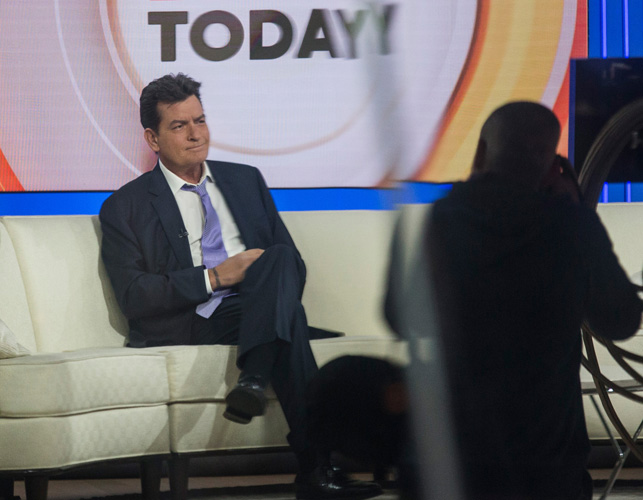 The actor revealed his health status to curb rumours and blackmail attempts that cost him $10 million.

“I am here to admit that I am in fact HIV positive and I have to put a stop to this onslaught, this barrage of attacks, of sub-truths and very harmful and mercurial stories that are about threatening the health of so many others, which couldn’t be farther than the truth.”

Actor Charlie Sheen, 50, made the powerful, if not unexpected, admission earlier this morning in an interview on The Today Show with interviewer Matt Lauer. Various sources reported the news as an “open secret” in Hollywood for the last few weeks, with tabloid rumours about Sheen’s health status gaining more traction amid behind-the-scenes blackmail attempts.

In the interview, Sheen noted that he learned of his diagnosis four years ago but isn’t certain how he contracted the virus. His doctor, Robert Huizenga, also on the show, claimed that the level of virus in Sheen’s blood is undetectable.

“Individuals who are optimally treated, who have a low viral load,” he said, “it’s incredibly rare, with protected sex, for the virus to be transmitted.”

Dr. Huizenga also noted that Sheen has HIV, not AIDS. Sheen admitted he’d had unprotected sex twice since his diagnosis, but that the women were aware of his diagnosis both times and received treatment afterward. He claims it’s “impossible” that he’s infected anyone else with the disease.

Sheen did note, however, that by revealing his secret to members of his inner circle, he opened himself up to blackmail and extortion.

“I trusted them, they were in my inner circle and thought they could be helpful. My trust turned to their treason.”

He also said that a prostitute took a photo of his medication, which she used to extort money from the actor. He estimated that he’d paid more than $10 million to keep the various people quiet, but said that he’s making the information public and that the payments stop today.

Sheen said he went into a depression upon receiving the news of his HIV status, throwing himself into drugs and alcohol, though he notes his high-profile 2011 meltdown, where he popularized terms like “tiger blood” and ”winning” and lost his job as the highest paid actor on television on the show Two and a Half Men, wasn’t tied to news of his HIV. “I wish I could blame it on that – that was more roid rage.”

The actor said he no longer does drugs but still drinks, which his doctor admits makes him “petrified” will cause Sheen to stop taking his four daily retroviral pills.

When asked if he was relieved to announce this information and get it off his chest, Sheen responded, “More than I thought possible.”