Between the Lines … with Helen Mirren 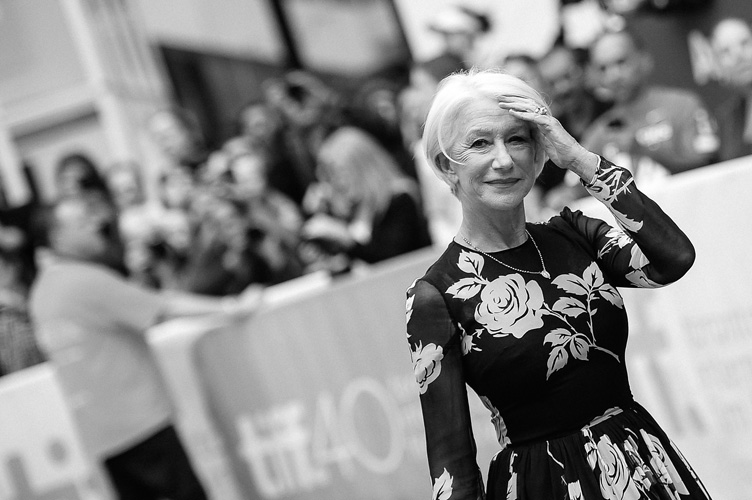 Helen Mirren discusses how roles for women in Hollywood have evolved as well as her latest film, Trumbo.

Standing in a hotel hallway, I watch as the large brown door to the adjacent room opens just a crack, through which a woman with a clipboard slips out. In the few seconds it takes the door to close, the sound of laughter – loud, boisterous, jolly – echoes from the group inside.

The journalists in the hall alongside me look at each other and continue to wait patiently. Some check their phones. Others their note pads. It’s a press day at the 2015 Toronto International Film Festival and everyone is eager to begin.

A few minutes pass. The woman with the clipboard hurriedly slips back into the room. Again, through the crack in the door, a round of cackles and merry conversation.

The woman slips back out in short order, followed by a group of five journalists boasting cheek-to-cheek grins. The woman with the clipboard waves us in and we’re greeted by a beaming Dame Helen Mirren, dressed in a fitted, floor-length black gown, as she puts the finishing touches on a cappuccino. She welcomes us all with a handshake and smile, taking the time to learn our names as if we were entering her home. Her warmth is genuine and her enthusiasm infectious.

“You can get a great coffee in a little coffee bar,” she tells us as she takes a sip, “but in a huge hotel it’s usually really hard.”

For the next fifteen minutes, Mirren sits with us around a small table discussing everything from her latest film, Trumbo – in which she plays notorious Hollywood gossip columnist Hedda Hopper, who falsely implicated some of Tinseltown’s stars and scribes in the 1950s McCarthy communist witch hunts – to the evolving role of women in film and a youthful prediction of her own success.

Q: You play gossip columnist Hedda Hopper in Trumbo. In your other TIFF film, Eye in the Sky, which centres around the difficult decision of authorising a drone strike that is sure to kill innocent civilians in addition to killing some of the world’s most wanted terrorists, you play Colonel Katherine Powell. Which character would you say is more dangerous?

HELEN MIRREN: I would say Hedda is more dangerous, because Hedda is trying to control people’s thoughts. I think that the Colonel is doing her job. I would not say she is an extremist. I don’t think she is an extremist. Hedda is a fundamentalist. She’s a fundamentalist extremist. She thought of herself as a great patriot. She was thought of as a great patriot. I think the colonel – she’s a military person and to be a military person obviously you are trained to a certain mindset … where death is a part of what you do. No, I would say Hedda is much more dangerous.

Q: Out of all the scripts and pitches you must receive, what is it about certain projects, like Trumbo, that attracts you to them?

HELEN MIRREN: Well, you know, I can’t pick and choose that carefully because great scripts are pretty rare actually. And usually it’s to try and avoid what I’ve just done. So obviously, with the incredible impact of doing The Queen and so forth, I’ve really tried to find things that are a contradiction to that. But Hedda was an interesting role – obviously not the lead role, far from it. But I love the director Jay [Roach]. Bryan [Cranston], I have to say, I’m bowing down to Bryan, really, who I think is just one of the great actors working today. So to be in a movie with him – he also happens to be one of the nicest people that you can ever meet. So I just admire him and love him so much that I very much wanted to be in anything that he was in.

Q: The role of the Colonel in Eye in the Sky, especially if this film was made 10 or 15 years ago, would have been a role traditionally reserved for a male.

HELEN MIRREN: Yes, I think especially because of the decisions she makes.

Q: What does the fact that the character is female say about equality in roles for women, especially when compared to the past?

HELEN MIRREN: Yes well it speaks to history, really. There are women who joined the military as soon as they could, 30 years ago, and they have reached that status of colonel, field commander, whatever. So I think it speaks to history, what’s happened, actually, in real life. And really, it speaks to what I’ve always said about acting roles – don’t put your energies into worrying about better roles for women on the screen or in the theatre. Worry about them for better roles in life because the more they have better roles in life the more you’ll see it reflected on the screen. And this is absolutely a case in point. This movie, is exactly that.

… When Demi (Moore) did G.I. Jane, how long ago was that? Probably 15 years ago or something like that. Well, G.I. Jane has now been in [the military] for 15 years.

Q: In your memoir, you wrote that you were, “in an environment full of testosterone and chaotic male hormones” early on when you were doing Cleopatra. How has that changed now, [or] has that changed?

HELEN MIRREN: Oh, it’s changed enormously. There are just many more women on a film set. In that [memoir] specifically, I was talking about a theatre situation. And actually, funnily enough, in the theatre it hasn’t changed so much. I mean, I think the male attitude has changed and an 18-year-old boy nowadays is a very, very different person to an 18-year-old boy then. I say a different person, probably no. As a person, the hormonal things that are happening are obviously exactly the same. But the understanding of the relationship between men and women has changed, I would say, enormously.

But on a film set, it’s great. You walk on a film set now and it’s not half women but there’s a lot of women. Especially, what gives me pleasure, is to see them in the camera department and the sound department. And that’s a huge change. There’s almost always now a woman – it’s usually a young woman, because it’s only just started – in the camera department. And that never used to be the case. Somehow, women couldn’t do camera. It was too heavy or they weren’t technologically … [Laughs]

But actually, camera’s sort of perfect for them because they’ve got quick hands and actually they’re brilliant at it. And also have great visual eyes. And even on sparks, you see women on the sparks, on lighting. That was always completely male. So that’s what gives me the great pleasure on a film set.

Q: In 1968, you went to a psychic and they said it would take some time before you achieve success. Were you amazed at how big the success got?

HELEN MIRREN: No, he didn’t really define it like that. All he said was, “You’ll be quite successful. But you’ll become very successful after your 40s.” Of course, when you’re 21 you don’t’ want to hear that. “Forty?! I can’t wait that long!” [Laughs] But, in fact, I was pretty successful actually. But, it’s true, I didn’t become internationally known…

Q: Could you have imagined that?

HELEN MIRREN: No, of course not. And I’m very grateful that it happened that way around actually, because I think, especially nowadays, to deal with what young actors have to deal with, is psychologically very difficult. Really difficult. They’re very good at it, so many of them, as well. But it’s very challenging.

NOTE: Shortly after this, the woman with the clipboard slipped into the room and told us our time was up. Mirren kindly shook our hands again and thanked us individually as we exited. Another group of journalists waited in the hall. We passed them, grinning cheek-to-cheek.

Trumbo is in theatres today.