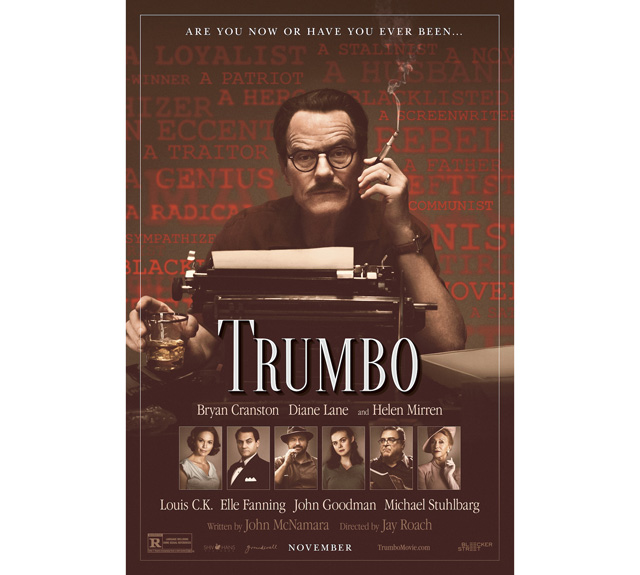 The defining performance Bryan Cranston fans have been waiting for since Walter White took his final bow.

Choice Quote: “You talk like a radical but you live like a rich guy … I don’t think you’re willing to risk it all to do the right thing.”

The Hype: The true story of the struggle and redemption of Oscar-winning screenwriter Dalton Trumbo, who was one of Hollywood’s most celebrated scribes when he fell victim to the McCarthy communist witch-hunts of the 1950s.

The Reality: There’s something about the way Bryan Cranston delivers gritty, cantankerous, law-skirting anti-heroes that captivates viewers. Not that Dalton Trumbo is anywhere near the level of outlaw that Breaking Bad’s Walter White ended up becoming. But Trumbo, like Breaking Bad – which launched Cranston from smiley sitcom dad to the upper-echelon of Hollywood performers – allows the actor full-reign to inhabit the character and every selfish habit, rebellious instinct and act of bravery that made up half of the real Trumbo’s legend.

The other half can be gleaned by simply looking up his resume: two Oscars for his screenwriting and films like Spartacus, Exodus and The Brave One to his name.

Trumbo artfully captures both sides of the man thanks to Cranston who, at his witty, petulant best, leads the charge of unfairly blacklisted screenwriters as they write under pseudonyms for a production company as a means of fighting back against an establishment stricken with communist hysteria.

The era of McCarthyism in Hollywood is rife with betrayal, sabotage and unrest. The struggle has found its way onto the big screen before, coming between Barbra Streisand and Robert Redford’s romance in The Way We Were, as well as in films like The Front, starring Woody Allen, Guilty By Suspicion, with Robert DeNiro and Annette Bening and George Clooney’s Good Night, and Good Luck.

Film fans may also remember Elia Kazan’s controversial lifetime achievement Oscar, handed out at the 1999 ceremony, where half the Hollywood crowd cheered and the other half silently protested the famed director, who named names during the hysteria in 1952, when he was introduced by De Niro.

Trumbo aptly illustrates why half of Hollywood sat on their hands that night in its depiction of the communist witch-hunt. Dalton Trumbo and his allies put up a brave fight, but it all comes at a cost. For every click of a typewriter key there’s a screenwriter being falsely maligned, often by notorious Hollywood gossip columnist and commie hunter Hedda Hopper, whose wicked motives are masterfully put into motion by former Zoomer cover subject Helen Mirren.

As such the “Hollywood 10,” as the blacklisted scribes are known, endure their fair share of tragedy for every triumph. When some allies doubt both his will and his methods, Trumbo’s extremely fortunate to enjoy the support of his very patient wife Cleo (Lane) and his kids, especially oldest daughter Nikola (Fanning), as well as industry pals like fellow screenwriter Arlen Hird (Louis C.K.), a young Kirk Douglas, played by Dean O’Gorman, who could pass for his doppelganger and Exodus director Otto Preminger (Christian Berkel).

If, however, anyone comes close to stealing the show from Cranston, it’s John Goodman as Frank King, the hilariously over-the-top head honcho of King Bros., a B-film production company that hires Trumbo and his buddies to re-write bad scripts under pseudonyms.

The film, meanwhile, spans several years and the world created by director Jay Roach is one that’s not entirely different from ours today – give or take some ghastly upholstery choices – from the radical right-wing politics to the fear of an unknown foreign threat that leads to paranoia and a breach of personal liberties.

The passing of time in the film is most noticeably marked by the evolution of Trumbo’s moustache. Like the man who wears it, the moustache at first looks commonplace until, over time, it slowly reveals it’s unique shape. And like Trumbo himself, it only gets stronger and more distinguished with every grey hair.

The Verdict: The defining performance Bryan Cranston fans have been waiting for since Walter White took his final bow.

Trumbo is in theatres today. Zoomer’s Mike Crisolago had a chance to sit down with Trumbo star Dame Helen Mirren at the Toronto International Film Festival. Click here for the interview.