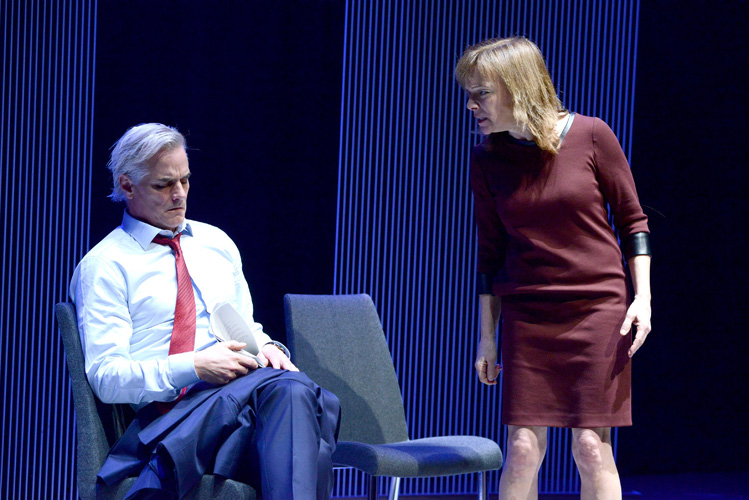 Domesticated is about the brutality of human interaction – every confrontation you ever feared, every secret you ever harboured, every conversation you ever dreaded – unapologetically fierce and uncompromising by design.

Politician Bill Pulver, husband and father of two daughters, is caught in bed with a prostitute.

But it gets worse.

The prostitute hit her head on the nightstand and Bill is under suspicion for assault.

But it gets worse.

After the press conferences and legal meetings, Bill has to go home and face the music.

And that, it turns out, is the worst.

The ensuing domestic implosion proves far more fun for those outside of the Pulver household thanks in large part to Paul Gross and Martha Burns, whose visceral performances anchor the Company Theatre production of Domesticated.

The play, penned by Pulitzer Prize-winning scribe Bruce Norris, stars real-life couple Gross and Burns who, despite their TV work in the series Slings and Arrows, haven’t appeared on stage together in more than 30 years, slip into the roles of beleaguered Bill and Judy Pulver so naturally that it almost merits a double-take when sitting with them as they laugh and joke during a pre-show interview.

Far from the breeziness of their real-life relationship, watching the Pulver union implode is like witnessing a dam buckle, spurts of water popping through until that final, inevitable deluge.

Directed by Philip Riccio, many liken Domesticated to the affairs carried on by the Bill Clinton’s and Eliot Spitzer’s of the world. And on the surface, the comparison is obvious.

But beneath the superficiality of Bill Pulver’s political standing and the ensuing scandal, Domesticated is about the brutality of human interaction – every confrontation you ever feared, every secret you ever harboured, every conversation you ever dreaded – unapologetically fierce and uncompromising by design.

“Some of the stuff that’s said, with the first preview audience you could feel them just go cold because you’re not supposed to say any of that out loud,” Gross told Zoomer before a recent performance. “[Playwright Norris] doesn’t provide any solutions to it but I think he wants to get people to start talking. Or at least talk about why they don’t talk.”

Communication is a key theme here – namely how we do it, with whom do we do it and why we don’t do it more often. It’s obvious that the Pulvers haven’t spoken much from the heart in the past three decades, but the clash of spouses isn’t relegated to a two-and-a-half-hour long shouting match.

Rather, the show leads to a climactic showdown by revealing the long trail of Bill’s bad choices and soiled relationships, and it’s almost painful to watch as Bill’s closet door opens and the myriad of skeletons tumble into a heap on the floor.

The entire ensemble, meanwhile, is tight from the first curtain to the last. The Pulver kids are played with spot-on teen/pre-teen angst by Kelly McNamee and newcomer Abigail Pew, while Akosua Amo-Adem as a TV talk show host following the Pulver affair, and Torri Higginson as Bill’s lawyer, deliver absolutely pitch-perfect performances – truly two of the highlights of the show.

The set is minimal, the lighting and sound hit their marks and the transitions between scenes so fluid that it’s actually fun, in a way, to watch how one bleeds into the next so seamlessly.

For some, Domesticated could prove too long on “problems” and too short on “solutions.” And that’s kind of the point. Make no mistake, you aren’t going to learn anything about good relationships here. But if you’re fascinated by the implosion of a family as viewed from the inside, warts and all, and aren’t prone to squirming when the intimate details start flying, Domesticated provides a compelling glimpse into what happens when unfiltered honesty becomes the only policy.

Domesticated runs until Dec. 20 at the Berkeley Street Theatre in Toronto. Click here for show and ticket information.