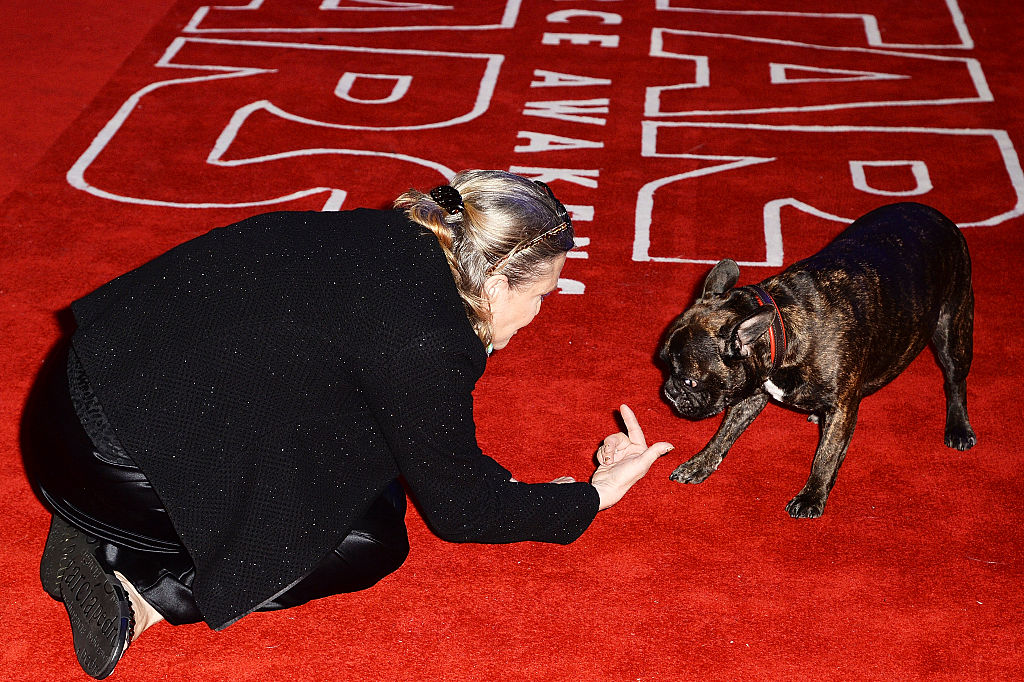 The force may have awakened with the Star Wars premiere in London but Carrie Fisher has always been a force to be reckoned with.

Now at 59, she’s got her crazy lady persona refined and honed into an authentic crazy old lady doin’ the rest of us proud.

Why be ordinary when you can be extraordinary?

Why wear a stunning designer gown when you can rock a creased shmata?

Why strut the red carpet when you can crawl it?

Fisher may be crazy but she’s crazy like a fox, er, French bulldog.

She’s also, besides being Leia, a performance artist and she knows how to win an audience, maybe more than any ingenue who only knows how to strike a pose.

Fisher has been making the rounds of talk shows and junkets to promote the new Star Wars with her therapy dog Gary Fisher in tow.

When you’re a woman over the hill in Hollywood — and pushing 60 you’re way over the whole mountain range — you need a gimmick, a brand, an attention-getting sidekick to avoid invisibility.

Fisher has fashioned herself into a poster girl for crazy old lady and what sidekick could be more attention-getting than a pooch that poops on the stage of a live talk show.

Yes, Gary Fisher decorated Kelly Ripa’s studio and that made news but even bigger news was the way Carrie Fisher conducted these TV interviews to promote the move, pretty much refusing to talk about the movie.

New Musical Express, the British music magazine, described her Good Morning America interview as “a face-off between dead-behind-the-eyes TV perfection and brutal, brutal honesty”: She “provided what has to be one of the most electric, bullshit-free interview performances of 2015, in which she ruthlessly mocked the film promo process and called out the film and TV industries’ ingrained sexism in a way that left her prim interviewer crying with laughter.”

So, yes, crazy old lady on her hands and knees on the red carpet nosing her dog, unstyled, unrestrained, maybe unbalanced.

But what a role model for all of us who have finally arrived at the time of our lives when we can just be who we are, unstyled, unrestrained and maybe even unbalanced.

There’s a lot to be said for not striking a pose people expect, for not balancing on the tightrope, for exploiting the freedom to be a crazy old lady.