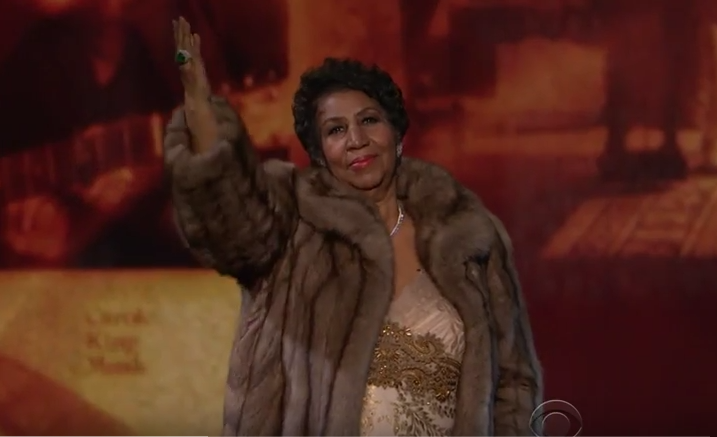 This was the performance of the year. It was just under four minutes long but Aretha Franklin, singing her signature hit “(You Make Me Feel Like) A Natural Woman,” showed why she is not only still the reigning Queen of Soul but a living legend and a true diva.

Performing at the 38th Annual Kennedy Centre Honors, which was held on Dec. 6 in Washington but broadcast on CBS this past Tuesday, the 73-year-old legendary singer brought U.S. President Obama to tears from the moment she started to belt the classic song.

The evening was a ceremony and celebration to honour George Lucas, Carole King and Rita Morena.

King was one of the songwriters of the hit 1967 tune and practically had a melt-down from the moment when Franklin walked on stage and sat at the piano. And she continued to have spasms of supreme ecstasy through out the performance – all of which were captured on camera.

She wasn’t the only one in awe of Franklin’s voice, which brought the house to a rousing standing ovation. Others in the audience from First Lady Michelle Obama to actress Rosie Perez were seen singing right along.

But it wasn’t just Franklin’s voice that was so captivating, it also her majestic presence.

Wearing a full-length fur coat over her evening gown and carrying a sparkling clutch purse, the diva casually threw the fur on the ground as her voice rose octaves for a crescendo of a finale.

You could tell the audience knew they had just witnessed something truly special. In today’s musical arena, where pop stars are slickly packaged and vocals are fine tuned electronically, these four minutes prove that to achieve legendary status, you have to start with talent.