“Ashes to Ashes, Dust to Stardust” — Tributes Pour in for David Bowie 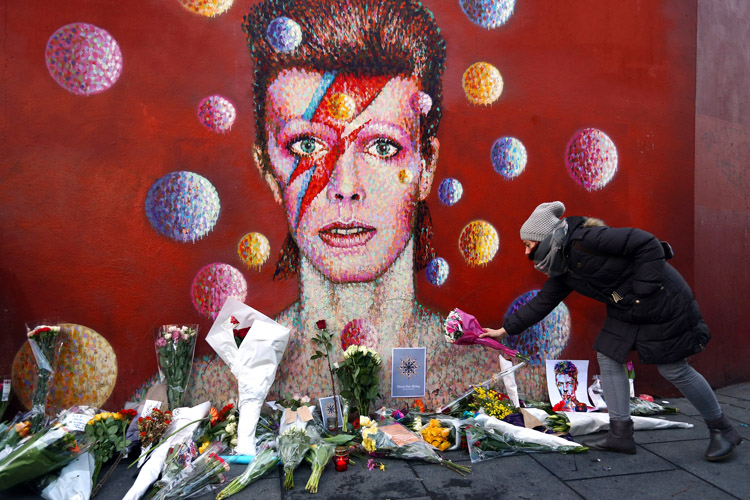 LONDON, ENGLAND - JANUARY 11: A woman leaves flowers beneath a mural of David Bowie in Brixton on January 11, 2016 in London, England. (Photo by Carl Court/Getty Images)

From London to the Vatican to outer space, tributes are pouring in for David Bowie, the legendary rocker who died Sunday, just two days removed from his 69th birthday, after privately battling cancer for more than a year.

In his near five-decade career as a rocker, Bowie consistently reinvented himself as a musician, fashion icon and actor. He pioneered glam rock and virtually defined the sound of the 1970s with a string of critical and commercial hits – from Space Oddity to The Rise and Fall of Ziggy Stardust and the Spiders from Mars to Aladdin Sane and Diamond Dogs – feats he continued to accomplish through to his final album, Blackstar, released just last week. He was the Beatles, Freddie Mercury and Elvis Presley rolled into one – revolutionary, versatile, influential, the greatest rock star who ever lived. After all, it’s not just any artist who could perform with both Bing Crosby and Queen and turn both songs into enduring classics.

In the South London neighbourhood of Brixton, where Bowie was born, fans and mourners created a makeshift street memorial in front of a mural of the singer, while a similar scene unfolded at the site of his star on the Hollywood Walk of Fame in Los Angeles. Cardinal Gianfranco Ravasi, who serves as the Vatican’s chief cultural spokesman, honoured the singer by tweeting the lyrics to his hit “Space Oddity” while British astronaut Tim Peake offered a most appropriate tribute to the man behind the interstellar persona Ziggy Stardust – a message from the International Space Station: “Saddened to hear David Bowie has lost his battle with cancer – his music was an inspiration to many.” Canuck astronaut and former Zoomer cover subject Chris Hadfield also tweeted about Bowie, writing, “Ashes to ashes, dust to stardust. Your brilliance inspired us all. Goodbye Starman.”

Meanwhile, Bowie’s longtime producer Tony Visconti discussed Bowie’s new album, calling it his “parting gift” to fans. “He always did what he wanted to do. And he wanted to do it his way and he wanted to do it the best way. His death was no different from his life – a work of art. He made Blackstar for us, his parting gift. I knew for a year this was the way it would be. I wasn’t, however, prepared for it. He was an extraordinary man, full of love and life. He will always be with us. For now, it is appropriate to cry.”

In addition, many other celebrities and public figures took to the Internet to celebrate Bowie’s life and mourn his passing.

British Prime Minister David Cameron: “David Bowie was someone who people of my age, and those quite a bit older, felt we grew up with. He provided a soundtrack to our lives, from the first time I heard ‘Space Oddity’ to the pride of welcoming British athletes at the London Olympics to one of his masterpieces – ‘Heroes.’

He was also a master of reinvention, who kept getting it right, leaving a body of work that people will still be listening to in a 100 years time. He was someone who truly deserves to be described as a genius.”

Cher: “DEVASTATED … A LEGEND IS GONE”

Anderson Cooper: “Find it hard to believe David Bowie has died. What an incredible life”

Russell Crowe: “RIP David. I loved your music. I loved you. One of the greatest performance artists to have ever lived. #sorrow”

Guillermo del Toro: “Bowie existed so all of us misfits learned that an oddity was a precious thing. he changed the world forever.”

Ava DuVernay: “‘Time may change me. But you can’t trace time.’ Gosh. David Bowie. One of the greats. Thank you.”

Mia Farrow: “‘The truth is that there is no journey. We are arriving and departing all at the same time.’ David Bowie we will miss you so much”

Peter Gabriel: “He meant so much to me and to so many. He was a one-off, a brilliant outlier, always exploring, challenging and inspiring anyone who wanted to push the boundaries of music, art, fashion and society. There are so few artists who can touch a generation as he did, we will miss him badly. Long Live Lazarus.”

Josh Groban: “He never seemed of this earth. Now he’s left it. He bent rules, gender, genres, and our minds. RIP David Bowie. One. Of. A. Kind.”

Elizabeth Hurley: “Goodbye brilliant, talented David Bowie. What a loss to music and the world. RIP”

Billy Idol: “Nearly brought to tears by sudden news of @DavidBowieReal David Bowie’s passing RIP … He inspired us to go beyond the norm & reach out & dispel the void of life in 70’s England wth our own art forms”

La Toya Jackson: “Just hearing about #DavidBowie! My condolences to his family and love ones! Your music will remain with this always!”

Val Kilmer: “David Bowie is a searing genius who will inspire millions for thousands of years. Planets will be named after him.”

Madonna: “Im Devastated! This great Artist changed my life! First concert i ever saw in Detroit! R.IP … Talented. Unique. Genius. Game Changer. The Man who Fell to Earth. Your Spirit Lives on Forever! … So lucky to have met you!!!! Hot Tramp I love you So!”

Paul McCartney: “Very sad news to wake up to on this raining morning,” the statement says. “David was a great star and I treasure the moments we had together. His music played a very strong part in British musical history and I’m proud to think of the huge influence he has had on people all around the world.

“I send my deepest sympathies to his family and will always remember the great laughs we had through the years. His star will shine in the sky forever.”

Edward Norton: “My whole young life I laid on the carpet in my room listening to Bowie & feeling my mind & heart open up Inspired me more than I can express”

Iggy Pop: “David’s friendship was the light of my life. I never met such a brilliant person. He was the best there is. – Iggy Pop”

The Rolling Stones: “The Rolling Stones are shocked and deeply saddened to hear of the death of our dear friend David Bowie … As well as being a wonderful and kind man, he was an extraordinary artist, and a true original.”

Gene Simmons: “David Bowie, you will be sorely missed. Bowie’s ‘Changes’ and the Ziggy story songs were a major influence for me.”

The Archbishop of Canterbury Justin Welby: “I’m very very saddened to hear of his death. I remember sitting and listening to his songs endlessly in the ’70s particularly, and always really relishing what he was, what he did, the impact he had.”

Kanye West: “David Bowie was one of my most important inspirations, so fearless, so creative, he gave us magic for a lifetime.”

Pharrell Williams: “David Bowie was a true innovator, a true creative. May he rest in peace 🖖🏾 #RIPDavidBowie”

Elijah Wood: “Never imagined a world without him. He has ascended into the cosmos from whence he came. Farewell, David Bowie”

‘Weird Al’ Yankovic: “I feel like the wind has been knocked out of me – I was not ready for this. RIP Bowie.”