Beauty and the Billionaire: Jerry Hall and Rupert Murdoch are Engaged 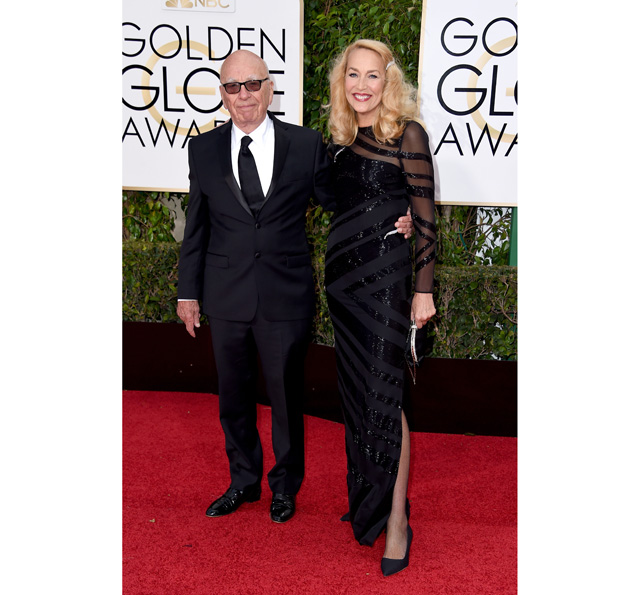 In a romance that escalated faster than a Fox News panel’s outrage over President Obama’s actions on gun control, billionaire media mogul Rupert Murdoch, 84, and model and actress Jerry Hall, 59, announced their engagement yesterday in the Murdoch-owned Times newspaper. Murdoch reportedly proposed while in Los Angeles with Hall for the Golden Globes this weekend.

The pair met last summer and made their romance public in October while in London for a rugby tournament. Their arrival on the Golden Globes red carpet, however, proved their highest profile appearance, which is when many first learned they were a couple.

Murdoch, who’s been married three times before, isn’t known for wasting time between marriages. He was married to first wife Patricia Booker, an Australian flight attendant, for 11 years, but when they divorced in 1966 it only took him a year to get hitched again. This time it was to journalist Anna Torv, to whom he was married for 32 years. A little more than two weeks after their split in 1999, Murdoch walked down the aisle for a third time, with businesswoman Wendy Deng. Murdoch was 68 and Deng 30. They divorced in 2013 and rumours swirled that Deng had an affair with former British Prime Minister Tony Blair.

Murdoch has six children in all, as well as 13 grandchildren and, really, three years between marriages is his way of taking it really slow.

Meanwhile, Hall is most famously linked to Rolling Stones frontman Mick Jagger, with whom she enjoyed a 22-year romance, including a Hindu wedding ceremony that was later declared invalid. They have four children together but broke up in 1999. The cause of the split, according to Hall, was Jagger’s infidelity.

While cynical stargazers will point to the size of Murdoch’s wallet and his estimated worth of $11 billion as a selling point for the relationship, Hall herself is worth approximately $15 million. That’s not a bad nest egg.

No, apparently what Murdoch lacks in charisma, style, star power, artistic merit and swagger compared to Hall’s most famous former flame, he may just make up for in love and affection. “They have loved these past months together,” a Murdoch spokesperson said of the couple, “[and] are thrilled to be getting married and excited about their future.”

In a tweet earlier today, actress and author Joan Collins posted a photo of herself alongside a smiling Hall, with the caption, “The future “Mrs. M” glowing about being #engaged to her new beau! #fiance #Congratulations“