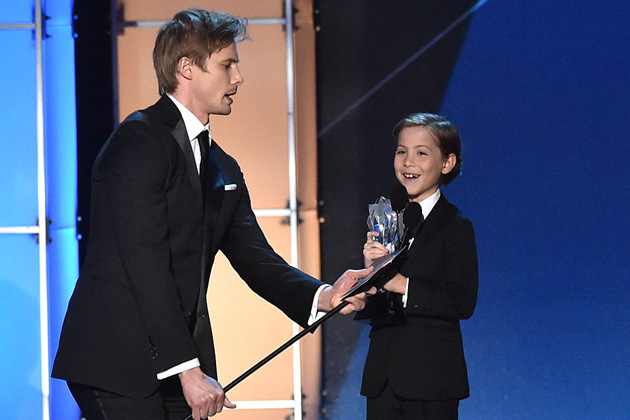 Pint-sized Jacob Tremblay stole hearts with his adorable thank-you speech at the Critic’s Choice Awards on Sunday night where he won the award for best young performer for his role in the movie, Room.

The nine-year-old Vancouver-born actor, dressed in an immaculate black suit, made an acceptance speech that was not only cute but astonishingly succinct, direct and could be an essential primer for all actors on how to do thank-you speeches at award shows without coming across like a bumbling mess at the podium.

Upping the cute factor, they brought out a box for him to stand on. Which still did not give him enough height to reach the microphone. Thankfully, one of the presenters just held the microphone for him.

Not fazed or embarrassed by any of this, the young actor – without consulting pre-written notes – started out by thanking the critics and acknowledging the competition.

“I first want to say thank you to all the critics who voted for me. It must be a super hard vote because of all the other great actors in this category.”

Right there, those two lines showed humility and grace.

And he remembered to thank everyone from majors, like his co-star Brie Larson, to his director Lenny Abrahamson. Everyone else was “Team Room” to which he acknowledged, “I think all of us working together made this movie come true. This award doesn’t just go to me for that. It goes to all of you as well.”

And last but certainly not least, he thanked the two very important people who probably made all of this possible: his parents.

And his wrap-up on what he was going to do with his award was clever. Very clever.

“I know where to put this. Right on my shelf next to my Millennium Falcon.”

It’s obvious from this little speech that this young confident thespian is well aware of how Hollywood works. He should have quite the stellar career ahead of him.

Or, the very least, a role in an upcoming Star Wars movie.