Tell Me About It, Stud: 5 Things We Loved About “Grease Live” 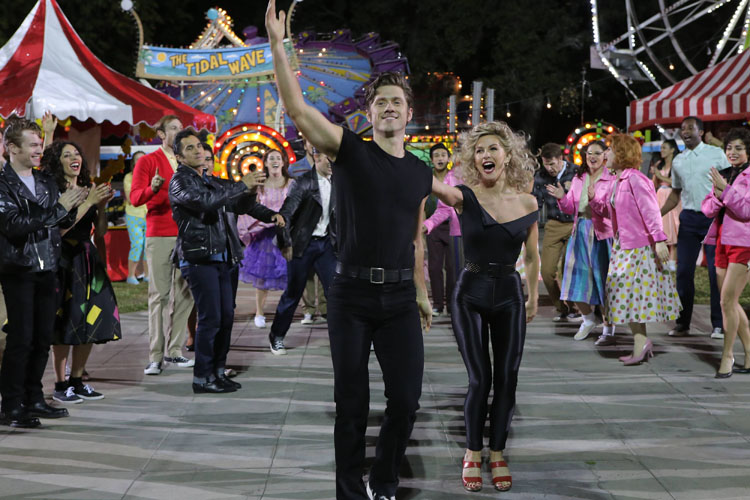 Capping off a week that began with a spat with leading Republican presidential candidate Donald Trump, FOX finally delivered the wacky hair and crazy antics we actually wanted to see, offering up Danny, Sandy, Kenickie, Rizzo and the rest of the Rydell High gang in Grease Live Sunday night.

The live production of the classic musical, starring Aaron Tveit as Danny and Julianne Hough as Sandy, proved a ratings hit with more than 12 million viewers tuning in. The reviews, meanwhile, are worth hand-jiving over, with the overwhelming response proving so positive they’d make even a Pink Lady blush.

As for us, here are our five favourite things about Grease Live:

1. The return of Didi Conn, 64, whose name you may recognize from the credits of the 1978 Grease film. She played the pink-haired Frenchy in the movie and returned to the Grease stage last night as the waitress who offers the Frenchy character, played by Canuck “Call Me, Maybe” singer Carly Rae Jepson, advice before her big “Beauty School Dropout” scene where she was serenaded by Grammy-winning R&B group Boyz II Men as the Teen Angels.

2. From the custom built “cafegymatorium” to the Warner Bros. sound stages and back lot, the locales looked phenomenal during the broadcast. Even a little rain couldn’t dampen the outdoor scenes, while the live audience was accounted for and brought into the production to inject even more life and energy into the various setups. For a taste of the scope they were working with, check out one of the show-stealing numbers, “You’re the One That I Want”:

3. Vanessa Hudgens’ performance. It wasn’t the fact that the Disney Channel alum was playing Rizzo, one of Grease’s most enduring characters, that was weighing on her last night. Instead, it was something far more personal: the day before the Greasse broadcast, Hudgens’ father passed away of cancer. And yet Hudgens, adopting the “show must go on” mantra, not only performed but proved one of the standouts of the entire production. It was a feat that took a lot of heart and one that earned her even more love and respect from her fans and peers. See her perform “There Are Worse Things I Could Do” in the clip below.

Grease Live, "There Are Worse Things I Could Do" by zoomermedia

4. The realism. Yes, there were moments when performers lost their breath and lines were bungled. But that’s part of what makes a production like this so wonderful. This didn’t have to be a live special. They could have done take after take and polished and packaged it as a pre-taped music. But they didn’t. So, as an audience member, to see this massive cast working so hard to live up to the impossible expectations that Grease fans hold, it’s almost endearing to see the odd missed beat, or extra breath, or stumbled line. Those small miscues just serve to remind us how great a job they’re doing in pulling off this monumental task.

5. The music, of course. When you assemble a roster of seasoned singers, Grammy-winning performers and world-famous pop stars for a major musical, chances are it’s going to sound great. And with some of the most catchy songs in the history of American theatre – from “Summer Lovin’” to “You’re the One That I Want” – viewers were in for a treat and this cast didn’t disappoint. An encore presentation of Grease Live would be music to any Grease-lover’s ears.