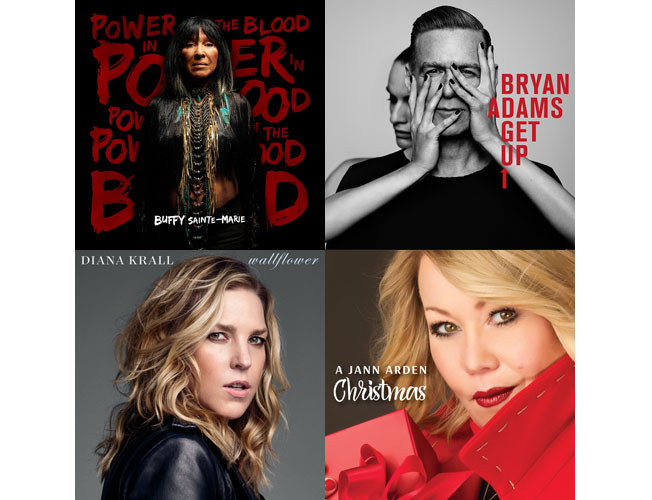 Rocker and two-time Zoomer cover subject Bryan Adams’ nomination for Rock Album of the Year for Get Up followed another big announcement — that the 56-year-old  will also be performing on the Juno broadcast.

Meanwhile, a pair of celebrated singers will battle it out in the Adult Contemporary Album of the Year category, with Wallflower by Diana Krall, 51, going up against another former Zoomer cover subject, Jann Arden, 53, and A Jann Arden Christmas. Former Great Big Sea frontman Alan Doyle, 46, picked up a nomination for Contemporary Roots Album of the Year for his solo disc So Lets Go.

In addition to the hardware being handed out, the Junos will also celebrate The Guess Who’s Burton Cummings, 68, who’ll receive an induction into the Canadian Music Hall of Fame for his solo work.

It was also announced that famed Canadian music programmer Rosalie Trombley will receive the 2016 Walt Grealis Special Achievement Award. Trombley, dubbed the “girl with the golden ear,” began her career as a music director at Windsor’s CKLW. As the Junos noted, “Trombley was celebrated in American and Canadian markets … Countless talented artists grew in popularity thanks to exposure from Trombley, who is credited for breakthroughs of Canadian artists into the United States, including Gordon Lightfoot, The Guess Who, and Paul Anka.

“Huge names in music can attribute some of their success to Trombley, as she helped both established and aspiring recording artists hit the Top 40 CHR charts. One of these artists, Bob Seger, was so grateful that he immortalized Rosalie in his Back in ’72 album with the song ‘Rosalie.’”

The Juno ceremony takes place on April 3, 2016, live from Calgary on CTV. Click here for the full list of nominees.