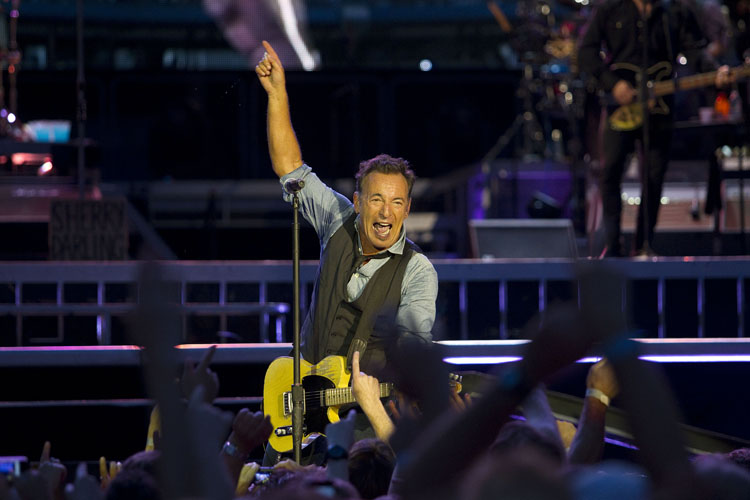 More than three decades after releasing one of the most iconic music videos of all time, Bruce Springsteen recreated its famed pulling of a woman out of the audience to dance on stage during a rendition of “Dancing in the Dark” at a concert last night at Toronto’s Air Canada Centre.

The Boss, still rocking 32 years after the “Dancing in the Dark” video introduced future Friends star Courtney Cox to the world, noticed a sign in the front row of the crowd at last night’s show requesting a dance. It belonged to Evelyn Raftery, an 88-year-old Toronto woman who celebrates her 89th birthday tomorrow. Springsteen, 66, obliged, inviting Raftery up on stage during the tune to dance up close with him.

“He was amazed that somebody of my age was … at the concert,” Raftery, a veteran of numerous Springsteen concerts, told TheLoop.ca.

Raftery was all smiles on stage during her dance with the Boss as the crowd cheered the couple on. Eventually, Springsteen walked her over to a set of stairs leading off the stage so she could return safely to her daughter and two sons, capping off what was no doubt one of the most thrilling birthday gifts Raftery ever received.

The Toronto show was Springsteen’s only Canadian stop on his The River Tour, a celebration of the 35th anniversary of one of his most successful and best-selling albums, The River. Reports from the show say that not only did Springsteen dance with Raftery, but he also crowd surfed through the audience.