Popcorn Picks: The Lady in the Van 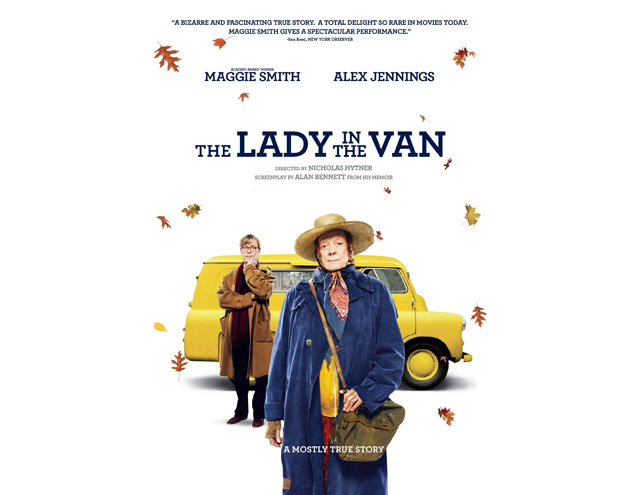 Like Bennett with Mary Shepherd, by the end of the film you’ll be happy that you’ve spent this time together.

Choice Quote: “I am not the [caregiver]. I am here, she is there. There is no caring.”

The Lady in the Van trailer by zoomermedia

The Hype: Based on the memoir by British scribe Allan Bennett, Smith stars as Mary Shepherd, an eccentric woman who lives in a van on the street in the London borough of Camden where Bennett (Jennings) has a home. When new parking restrictions threaten to force her from the neighbourhood, Bennett reluctantly allows her to park her van in his driveway until she can find a suitable alternative. She does so, and ends up staying there for 15 years.

The Reality: Funny at times while dragging at others, The Lady in the Van is a sweet film about the relationship that blossoms between Shepherd and Bennett, and the unraveling of Shepherd’s haunted past and what led her to her adopting this home on four wheels.

The film is, of course, propelled by Maggie Smith, who draws from celebrated performances in British stage productions of the same story. Here she’s crass but rarely ever truly mean, armed with both a sharp wit and a strong inclination toward self-defense while at the same time vulnerable while in hiding from a past that she can never truly outrun.

Jennings’ Bennett also leans toward the cranky and irritable but, much like the titular character, he finds within himself the willingness to allow a complete stranger into his world and, ultimately, to love them despite himself.

The film is full of funny one-liners and also it’s share of absurdity, but it’s something of an ebb and flow when it comes to the plot. It can get dry but Smith’s performance pulls you back in, as do Bennett’s struggles with his own ego, his creative insecurities and an aging and ailing mother whom he cares for.

The Verdict: The film is clever and fun despite dragging in parts. But, like Bennett with Mary Shepherd, by the end you’ll be happy that you’ve spent this time together.

The Lady in the Van is in theatres today.