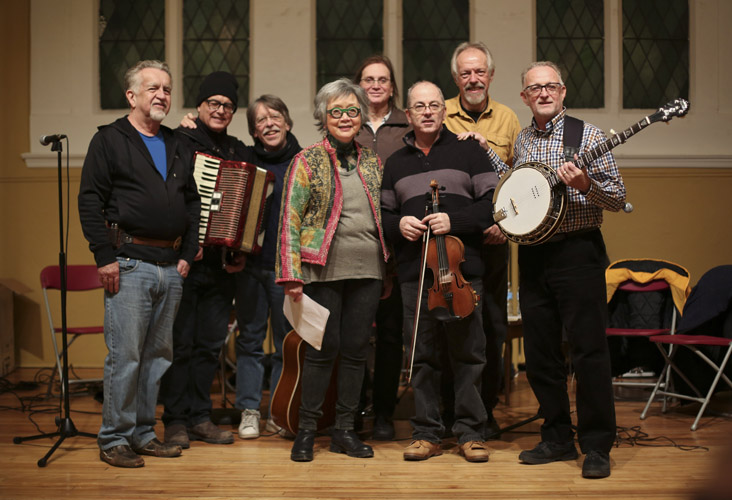 It’s a night of stomping, singing and cheer in honour of one of Canada’s most beloved musicians – Stompin’ Tom Connors – this Tuesday in Toronto. To mark what would have been the Canuck troubadour’s 80th birthday, friends, family and fans will gather at Hugh’s Room in Toronto on Feb. 9 to pay tribute to the man who brought tunes like “The Hockey Song,” “Bud the Spud,” “The Marten Hartwell Story” and “Sudbury Saturday Night” to the forefront of Canadian consciousness.

“[It’s] a history that’s like an oral history, like the greatest kind of history that you can have in a country, where it’s not written down but everybody knows it,” the Right Honourable Adrienne Clarkson, former Governor General of Canada, said of the music of her longtime friend, Stompin’ Tom, who passed away at age 77 in 2013. “And that’s what Tom was able to do for us. He was able to sing that into our consciousness and we’re grateful for that.”

Clarkson will be among the crowd paying tribute to Stompin’ Tom – and in years past has even performed a tune or two herself at the birthday bash – alongside his wife, Lena, the band Whiskey Jack, who often backed Connors on stage, award-winning Canadian singer (and one of Connors’ favourites) J.P. Cormier, Juno-nominated singer Douglas Cameron and other special guests.

MIKE CRISOLAGO: Why are Stompin’ Tom and his music so revered across Canada?

ADRIENNE CLARKSON: I think the reason he’s loved so much is that people recognize themselves in him and what he writes about, because it’s their town, it’s their hockey, it’s their potato. He gives us all a kind of ownership on our own lives. It’s because he makes us feel we own what we know we are part of. And plus, he writes wonderful lyrics, they’re funny, they rhyme, and they’re very heartfelt always. He’s very totally and utterly sincere. And I think Canadians respond to that.

DUNCAN FREMLIN: He was an uncompromising person in terms of his values and his stands on issues. And I think if there’s one thing [about] Canadians, or at least the fans that I get to see in the show, they very much appreciate the integrity behind the man … When we were touring with him live, there would be people in the audience in tears because here was the man himself out speaking and singing songs on their behalf. And I’ve never seen anything like it.

MC: That’s interesting because, in an age where celebrity is all about branding and image, it seems that what you saw of Stompin’ Tom was the real man on stage and off.

AC: And he was always like that. I can tell you that I go back a long way at the CBC so I probably met him early on in his career … And the tough life that Tom had, which is recounted in the songs, which we know from his biography, made people respond in two ways: one, if they’d had a tough life themselves, they identified totally with him. But if they’d had a good life, he made it understandable to them about what it was like to not have had the privilege they’ve had. I think that’s a really beautiful thing in Canada, and it’s part of our openness to people. Tom exemplifies Canadian openness to people.

DF: Tom had to earn his respect the hard way. When you’re in the music industry, if you don’t play by their rules, you pay the price. And Tom paid the price. He let them know how he felt, he sent back his Junos for a good reason, and he stood by that, and over the years he’s gained more and more respect. And I think his respect is going to grow even more than it has.

MC: Madam Clarkson, you had a funny experience with Stompin’ Tom at Rideau Hall.

AC: I remember when he came to Rideau Hall to get the [Governor General’s] Performing Arts Award and the staff said, “He’s wearing a hat. Nobody wears a hat in Rideau Hall. They have to take their hat off.” But I said Tom doesn’t have to take his hat off. He’ll never have to take his hat off. That’s part of Tom. I never saw it off. But, I said, he can’t smoke in here because nobody does smoke in here. So I showed him to a window where he could put one leg out and sit in the window and he smoked outside that window. He didn’t mind.

MC: Duncan, can you talk to Tom’s talent as a musician and what he brought to the table in that respect?

DF: We’ve been playing [his music on tour] for a couple of years and it’s one thing to stand behind him and support him on a show, but to actually perform these songs ourselves, they take on a whole different meaning. It’s very simple music – there’s nothing complex about it. The melodies are not simple. If you listen to a song like “It’s Canada Day Up Canada Way,” that’s quite an interesting melody. Difficult to sing – I know because I’ve been trying to figure out how to do it well. I mean, he hitchhiked all over the country and got to know the country in a way that most of us will never know so I’m sure a lot of the inspiration came from that. But he had an innate ability to communicate lyric and melody and he had this amazing voice. Not the greatest guitar player in the world but he never sold himself as a great guitar player. He always surrounded himself with the best musicians you can have and so that was part of the role of my band performing with him.

MC: When it comes to the big 80th birthday celebration, what can we look forward to at the Stompin’ Tom tribute?

AC: Well we will all take part and we’ve invited various people … because we want to always remember Stompin’ Tom on his birthday.

DF: J.P. Cormier, who was one of Tom’s favourite musicians … wrote a song recently called “House of Plywood” and it’s in honour of Tom. It is one of the most moving pieces of music I’ve heard in a long time and he’ll perform that. But the other thing is that the musicians on stage, they’re all seasoned musicians who know Tom’s material inside and out and we’ve been told that because the level of musicianship is so high, it is elevating these songs to a whole different level. It’s placing them at the same level as k.d. lang’s material or Gordon Lightfoot’s material, and Tom, generally, has never been given the same respect, musically, as these acts have been given. I think you’re going to see on the 9th that’s going to change dramatically.

AC: I think the respect that is Tom’s due is really emerging now. He’s always really had it. It was just never stated as such. And I think we hope that by celebrating his birthday, by having people know that we’re still listening to him, that he’s still being performed, that people are still buying the discs and so on, that is really important. And that means it isn’t just a legacy. It’s living music. So I think that’s what we really want – for people to take part and to sing his songs and to feel like they are part of it.

MC: And fans may even get to see Madam Clarkson sing a tune again…

DF: I will tell you that her voice has a bit of a twang to it. I don’t know that she expected that to be the case but when you sing a Tom song somehow that upper lip starts doing something weird. So I’m looking forward to the twang again this year.

AC: I think Duncan is very careful of my reputation because he didn’t want me to make a bloody fool of myself [last year] and so I had to have something that suited my style of singing. Now I’m very happy singing in church, I sing hymns, I sang in a choir when I was in university and I’m very good singing with people. But I’m not a soloist as such. So doing “The Marten Hartwell Story” where there’s a lot of what I call Henry Higgins type singing – a lot of talking singing – is perfect for me. And then there’s a chorus, which everybody else joins in on and that’s very nice.

DF: Tom just wanted his music to be played, and we’re happy to oblige.

See below for a video invite from the Right Honourable Adrienne Clarkson, Duncan Fremlin and others to Stompin’ Tom’s 80th birthday bash.