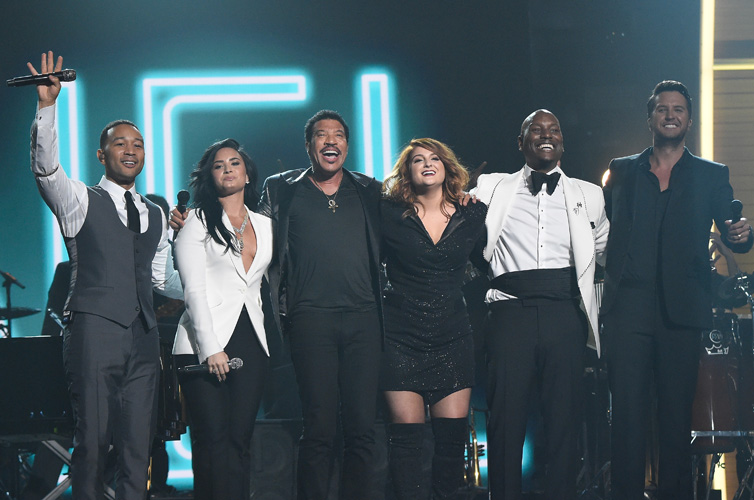 It’s Grammy night, which means every pop star and rocker worth their space on your iPod or Spotify account is in attendance. But despite the hardware handed out and LL Cool J making his annual go-around as host (at 48, he’s a boomer too!), the highlight of the 58th annual Grammys is turning out to be a series of tributes from some of music’s hottest young stars and classic rockers in honour of legendary artists both past and present.

The first star-studded number came about an hour into the show, with John Legend, Demi Lovato, Luke Bryan, Meghan Trainor and Tyrese paying tribute to the 2016 MusiCares Person of the Year, Lionel Ritchie. They performed a medley of the R&B legend’s biggest hits, both solo and with the Commodores, including “Brick House,” “Easy,” “Hello,” “Penny Lover” and “You Are” before the 66-year-old joined them onstage to cap the number with “All Night Long (All Night),” by the end of which it seemed everyone in the audience was on their feet dancing along. Ironically, they didn’t perform the tune “Nightshift,” which brought the Commodores their first Grammy.

The next tribute followed fast, with Stevie Wonder, 65, and his “new friends,” a cappella group Pentatonix, teaming up for a rendition of “That’s the Way of the World” in memory of Earth, Wind & Fire founding member Maurice White, who passed away earlier this month at age 74. After the performance the ensemble presented the Song of the Year award, with Wonder going joyfully off script joking that since the winner (Ed Sheeran for “Thinking Out Loud”) was printed in braille on the card, Pentatonix couldn’t read it. He then made a quick but important statement about making the world accessible to people of all abilities.

Not long after, Jackson Browne and the Eagles performed “Take It Easy” in a quick but fitting tribute to Eagles founding member and songwriter Glenn Frey, who passed away in January at age 67.

Lady Gaga channeled the spirit of Ziggy Stardust, Aladdin Sane and the Thin White Duke for her electric tribute to David Bowie. The much-anticipated performance included cuts of “Space Oddity,” “Changes,” “Ziggy Stardust,” “Suffragette City,” “Rebel Rebel,” “Fashion,” “Fame,” “Under Pressure,” “Let’s Dance,” and closed with “Heroes” in a showing that, while somewhat rushed, highlighted the best of both Bowie and Lady Gaga herself.

Bonnie Raitt, 66, took the stage next to honour the “Queen of R&B” Ruth Brown, a 2016 Grammy Lifetime Award recipient, before joining Gary Clark Jr. and Chris Stapleton in a tribute to the “King of the Blues” B.B. King, who died last May at age 89.

And the final tribute of the evening came courtesy of the Hollywood Vampires – a super-group featuring Alice Cooper, 68 and still rocking the eye makeup, Johnny Depp, 52 and Joe Perry, 65 – who made their television debut with “As Bad As I Am” and “Ace of Spades” in memory of Lemmy Kilmister of Motörhead, who passed away in December at 70.