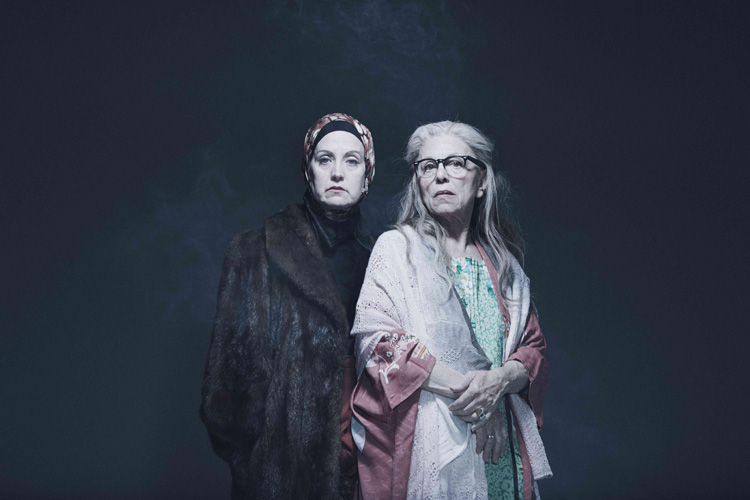 Like a weed that inexplicably sprouted amid the sprawling mansions and manicured properties nestling New York’s upper crust in the heart of East Hampton, the dilapidated old home known as Grey Gardens became a cinematic sensation in 1975 thanks to its two eccentric residents – Edith “Big Edie” Ewing Bouvier Beale and her daughter, Edith “Little Edie” Ewing Bouvier Beale.

Big Edie, 80 at the time, and Little Edie, then 58, were former socialites and singers as well as close relations to a particularly famous former First Lady – Jacqueline Kennedy Onassis. Jackie O’s aunt and first cousin respectively, the pair were discovered by documentarians Albert and David Maysles living in the ruins of a once beautiful home that had become overrun with wild animals, insects and encroaching trees.

The story of Big and Little Edie gained massive acclaim upon the release of the Maysles’ documentary Grey Gardens in 1975. An Emmy and Golden Globe HBO TV film about the two, starring Jessica Lange and Drew Barrymore, debuted in 2009 and the documentary went on to become the first to ever be adapted for Broadway – and as a musical no less! – earning multiple Tony Awards in the process.

With the musical set to debut tonight in Toronto, Dora Award-winning actress – and the first person to perform at all four Mirvish theatres in Toronto – Lisa Horner, who plays Little Edie in the show, took some time out of rehearsal to talk Grey Gardens with Zoomer’s Mike Crisolago.

MIKE CRISOLAGO: To start, Little Edie, like her mother, is beloved among fans of Grey Gardens. What challenges does that bring for you, as a performer, when adding your own personal touch to a person/character who so many people feel they already know?

LISA HORNER: I do tend to feel pressure to “get it right” when I play real people. Especially ones that are as beloved as the Bouviers. To combat that feeling I tried to do a lot of research and then ultimately bring her to life onstage based on the script I had in front of me. My hope is that those wonderful ladies would be happy and proud to see how loved they were.

MC: How does the addition of music to Grey Gardens amplify and broaden the story of Little and Big Edie, especially for those who are already fans?

LH: Well, they say in musicals that the reason why you sing is that it’s too emotional to just speak it. The feelings are too strong. I would say that is especially true with these women, who were so passionate and theatrical in their own way.

MC: What is the biggest challenge in bringing Little Edie to life on stage?

LH: The biggest challenge I’ve been having is to bring her nuances to the stage. She was such a layered, interesting woman, I can never just look at something one way. The Edie’s were such intelligent women, there was nothing easy about them or their life…

MC: The story of Little and Big Edie, in a lot of ways, spotlights a major topic of discussion being had today around mental illness and aging. Is there a lesson to be learned here about how to deal with it or, even more so, how to relate to and understand those struggling with it?

LH: Well that is a constant discussion in the rehearsal hall. I’m not sure what level or what kind of mental illness Little Edie was suffering. In the musical, the idea of schizophrenia is introduced as a possibility but I didn’t see any real evidence of it in the research. There did seem however, to be an incredible amount of unhealthy co-dependency. Unfortunately I’m not sure I would use these women as an example of what to do or even not to do. I will say though that in terms of feeling responsibility and love for aging and ill parents – that is a huge part of this story.

MC: If you could meet Little Edie at her Grey Gardens home around the time that the original documentary was made, what would you say to her?

LH: Oh my gosh, I would be overwhelmed by questions for her! I think I would ask here to tell me the story of her life then sit back and appreciate this amazing gal.

MC: How does it feel to be performing in this highly-acclaimed musical that is premiering in Toronto on the 40th anniversary of the original film’s release?

LH: It feels rewarding and terrifying and thrilling!

And check out Lisa Horner performing the number “The Revolutionary Costume for Today” from Grey Gardens in the video below:

Grey Gardens runs from Feb. 19-March 6 at the Berkeley Street Theatre in Toronto. Tickets can be purchased at the box office, over the phone at 416-368-3110, or online at www.canadianstage.com.