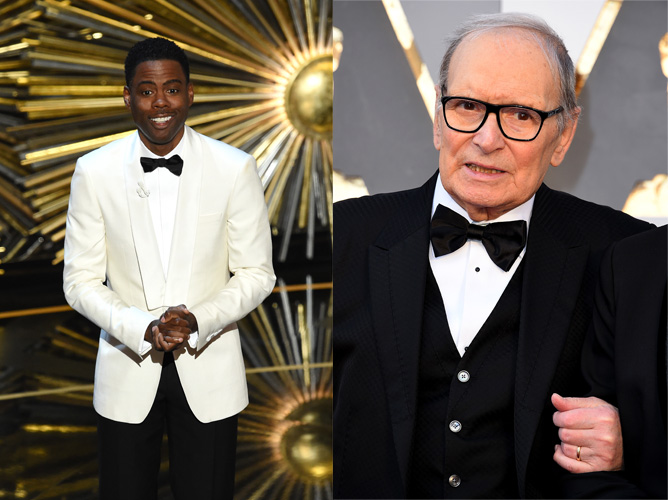 From Chris Rock’s take on the #OscarsSoWhite debate to 87-year-old Ennio Morricone’s history-making win, we recap our favourite boomer moments from the 2016 Academy Awards.

The Host with the Most

The pre-show buzz was all about host Chris Rock, 51, and how he’d address the #OscarsSoWhite debate. And the comedian, who has never been one to mince words, didn’t disappoint.

“Welcome to the Academy Awards – otherwise known as the ‘White People’s Choice Awards,’” Rock began, before discussing how some actors — like Will Smith and wife Jada Pinkett-Smith, are boycotting the awards. He noted he considered quitting as host but he realized the show would go on without him. “And the last thing I need is to lose another job to Kevin Hart.”

He went on to ask why people were boycotting these Oscars as opposed to one of the “71 other times” no people of colour were nominated for Academy Awards. “In the ’50s and the ’60s, what are those years. I’m sure there were no black nominees, and black people did not protest. Why? Because we had real things to protest at the time. We had real things to protest. We were too busy being raped and lynched to worry about who won best cinematography.”

Then he noted that this year’s Oscars would be different: “This year, in the In Memorium package, it’s just going to be black people who were shot by the cops on the way to the movies.”

He went on to call Creed “black Rocky” and note “Rocky takes place in a world where white athletes are as good as black athletes. It’s a science fiction movie” before getting serious to declare, “It’s not about boycotting anything. It’s about we want opportunities. We want black actors to get the same opportunities. That’s it. And not just once.”

Rock went on to discuss the diversity issue throughout the show through both jokes and skits, such as a montage of African-American actors re-imagined in major movies from the last year, including Whoopi Goldberg in Joy, Leslie Jones in The Revenant, Tracy Morgan in The Danish Girl and Chris Rock in The Martian.

Inside Out wins for Best Animated Feature

It’s not technically a boomer winner (though five of the principal cast members are boomers) but Inside Out was one of our favourite films of 2015 and should have been nominated for Best Picture. We’ll take this win though, given we all but predicted it when we saw the film last summer.

The sentimental choice in this category was Sylvester Stallone, 69, who was up for his role in Creed and had already set the record for the longest span of time between Oscar nods for the same character ever, having first been nominated for playing Rocky Balboa in 1977 in the original Rocky film.

However, just like in Rocky, Stallone wasn’t meant to take home the gold. Instead the statue went to Mark Rylance, 56, who portrayed Soviet spy Rudolf Abel opposite Tom Hanks in the Steven Spielberg Cold War drama Bridge of Spies.

If you think Leo DiCaprio, at 41, had to wait a long time for his Oscar, imagine how Italian composer Ennio Morricone feels. At age 87, with his win for best original score for The Hateful Eight, Morricone surpassed Canuck Christopher Plummer as the oldest Oscar winner in history. Unbelievably, though he’s been celebrated for his work in film with honorary Oscar accolades and has won awards around the world throughout his career, this was Morricone’s first Oscar nomination. The composer was in attendance to accept and received a standing ovation as he took the stage, where he gave his speech in Italian (and through an interpreter) and dedicated the Oscar win to his wife, lyricist Maria Travia.

Sure he’s not a boomer, but you had to feel a little joy when Leonardo DiCaprio, 41, finally won a statuette — for Best Actor for his role in The Revenant. And the fact that he used his long awaited acceptance speech to draw attention to urgent causes like climate change? How could you not be happy for him?