Beyond Diversity: 5 Other Important Issues Spotlighted at the Academy Awards 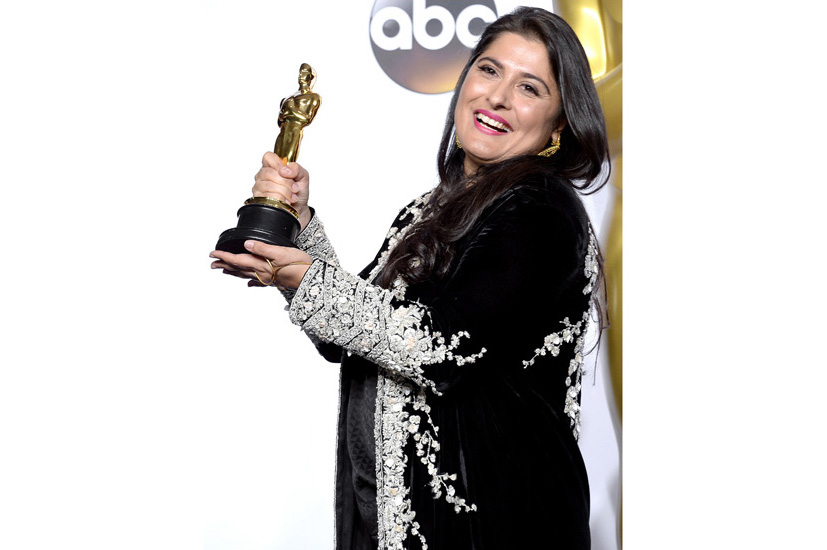 Pakistani-Canadian filmmaker Sharmeen Obaid-Chinoy, whose film "A Girl in the River: The Price of Forgiveness" won the Oscar for Best Documentary (Short Subject)

The anticipation leading to last night’s Academy Awards was all about host Chris Rock and how he’d skewer Hollywood’s elite amid the #OscarsSoWhite debate.

While Rock kicked off the show with a pointed monologue that condemned the lack of diversity in Hollywood – a theme that he returned to throughout the show – #OscarsSoWhite was hardly the only issue brought into the spotlight at the 88th annual Academy Awards. As such, we look at five other issues brought to the forefront during last night’s Oscar ceremony.

Laday Gaga Oscar performance, “Til It Happens… by zoomermedia

“Too many men and women around the country are still victims of sexual abuse. We must and we can change the culture so that no sexual abuse survivor thinks they did anything wrong.” Powerful words courtesy of U.S. Vice-President Joe Biden, whose impassioned introduction at the Oscars led to one of the award show’s most moving musical performances in recent memory. Lady Gaga, who just a few weeks ago paid a rocking tribute to David Bowie at the Grammys, played piano and performed a heartfelt rendition of her Oscar-nominated tune “Til It Happens to You” from the documentary The Hunting Ground, about rape and sexual assault on college campuses.

At one point during the performance, Gaga, herself a survivor of sexual assault, was joined on stage by a number of fellow survivors, both men and women, who had phrases like “Not Your Fault” and “Survivor” written on their arms.

The performance brought some of the Hollywood heavyweights in the room to tears and Brie Larson, who won the Best Actress Oscar for her role in Room, about a woman and her son who are held prisoner for years by the boy’s father – based on the novel by Irish-Canadian author Emma Donoghue, who was also nominated for Best Adapted Screenplay – hugged the survivors as they left the stage.

The award for Best Documentary (Short Subject) isn’t one that generally garners many headlines. Just ask comedian Louis C.K., who introduced the category by noting, “These [nominees] will not make a dime off this. These people will never be rich as long as they live, so this Oscar means something … This Oscar’s going home in a Honda Civic. This Oscar’s going to be the nicest thing they ever own in their lives, it’s going to give them anxiety to keep it in their crappy apartment.”

But the mood turned quickly from laughs to poignancy when Pakistani-Canadian filmmaker Sharmeen Obaid-Chinoy was announced as the winner for A Girl in the River: The Price of Forgiveness, about the attempted honour killing of a Pakistani teen. Obaid-Chinoy was quick to correct C.K., noting this was her second Oscar; her first, in 2012 in the same category, for the film Saving Face, about female victims of acid attacks in Pakistan, made her the first ever Oscar winner from the country.

Obaid-Chinoy went on to deliver what some call the speech of the night, declaring, “This is what happens when determined women get together. This week the Pakistani Prime Minister has said that he will change the law on honour killing after watching this film. That is the power of film.” She also thanked the subject of her film, a young woman named Saba, as well as “all the brave men out there, like my father and my husband, who push women to go to school and work, and who want a more just society for women.”

It finally happened – Leonardo DiCaprio won an Oscar. As the entire auditorium delivered thunderous applause – no doubt matched by the millions of film fans watching around the world who were pulling for him – Leo decided to take his long-awaited moment in the Oscar spotlight and use it for something other than thanking every agent, PR person, handler and studio exec he ever met.

“Climate change is real. It is happening right now, it is the most urgent threat facing our entire species and we need to work collectively and stop procrastinating,” the Revenant star pleaded. “I thank you all for this. Let us not take this planet for granted – I do not take tonight for granted.”

Awww … he finally won an Oscar and he used his moment to make a plea for the environment? How can anyone not like Leo?

Earlier in the evening, Jenny Beavan, who won the award for Best Costume Design for her work on Mad Max: Fury Road, made a similar statement while accepting her statuette – ignoring the orchestra that tried to play her off.

“I just want to say one quite serious thing. I’ve been thinking about this a lot, but actually it could be horribly prophetic, Mad Max, if we’re not kinder to each other and if we don’t stop polluting our atmosphere. So, you know, it could happen.”

Speaking of the orchestra trying to play a winner off the stage, Alejandro G. Iñárritu, 52, who won the Best Director Award for the second year running – a feat not seen since the early 1950s – didn’t even flinch when the orchestra attempted to cut him off during a meaningful moment in which he wanted to address equality. Instead he simply spoke over the music until it became clear that it was the Revenant director, and not the musical director, who was in control.

“I’m very lucky to be here tonight but, unfortunately, many others haven’t had the same luck. There is a line in the film that [DiCaprio’s character, Hugh Glass, says] to his mixed-race son, ‘They don’t listen to you, they just see the color of your skin.’ So what a great opportunity to our generation to really liberate ourselves from all prejudice and, you know, this tribal thinking, and make sure for once and forever that the color of the skin becomes as irrelevant as the length of our hair.”

Sexual Abuse Scandal in the Church

Spotlight – the Best Picture-winning film about a team of Boston Globe reporters unravelling years of sexual abuse by priests, took home the evening’s most coveted prize. Many called it a surprise win, but very few were shocked by the tone of the acceptance speech.

Producer Blye Pagon Faust lauded the work of the reporters involved and highlighted the importance of investigative journalism, while fellow producer Michael Sugar took the microphone and made an appeal to the Catholic Church’s highest priest:

“This film gave a voice to survivors, and this Oscar amplifies that voice, which we hope will become a choir that will resonate all the way to the Vatican. Pope Francis, it’s time to protect the children and restore the faith.”