Between the Lines … with Bonnie Raitt 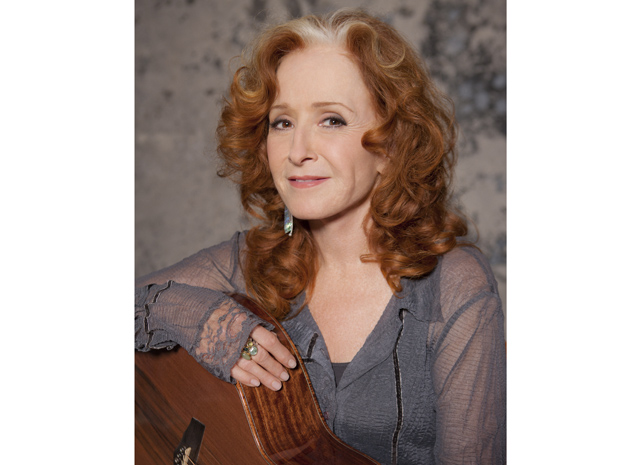 Over the course of her 40-year career Bonnie Raitt, 66, has forged a reputation as one of the most celebrated, awarded and influential artists in country music.

Or was it blues music? Or some sort of hybrid? Little help, Bonnie?

“I can’t control how people are going to perceive the record,” Raitt tells me when discussing her latest disc, Dig In Deep, the follow-up to her 2012 Grammy-winning album Slipstream. “People want to put you in a box. Is she a country artist? Is she a blues artist? I’m really none of those things although I’m influenced a lot by blues and R&B.”

Luckily Raitt takes it all in stride, grateful for both the success she’s enjoyed and the loyal (and growing) fan base that has propelled her career into its fourth decade.

“It’s been a really great two sections of my life, as a cult artist and as a little bit more well-known in the last 25 years,” she says, genuinely appreciative of those leaner early years and the eventual breakthrough in the late-1980s with the album Nick of Time, which led to her greatest successes, some of her toughest personal struggles and ultimately worldwide fandom, 10 Grammys and a spot in the Rock and Roll Hall of Fame. “I don’t have any regrets and I wouldn’t trade anything that happened.”

With the release of Dig In Deep, in stores and online now, and a tour that will take her across North America – including a date in Toronto on March 15 – the self-professed “gypsy” and I discussed her new album, staying fit and growing more interesting with age.

MIKE CRISOLAGO: Dig In Deep is your 17th studio album. Is it as exciting when you release an album today as it was 30 years ago?

BONNIE RAITT: It’s exciting and hairy waiting to find out if people like it or not but I do the best I can each time … There’s a lot less wrangling going on and more confidence by the time you have five or six albums under your belt. It’s more exciting [now] and we got such a great response with the last record that it’s always a little bit trepidatious wondering if people are going to say, “Well, I guess that was it. This one’s not as good.” [Laughs] It makes it particularly exciting when the good reviews start coming in.

MC: Do you feel people expect more from you given your past success?

BR: Since the beginning I’ve basically just been making records for my fans and my peers and I’ve had the blessing of a bunch of journalists and radio people that seem to get what I do. I’ve never really sought after being number one. I got that wisdom about just aiming for the best you can do and just sort of build your audience slow and steady and they’ll stick with you if you keep coming up with things that are keeping them interested. So the only pressure I have is it gets more daunting to find new ways to talk about love and new topics and different musical styles and fresh approaches so that you’re not repeating yourself.

MC: How, then, has your creative approach to writing music evolved over the years?

BR: I think I’ve probably changed as an artist … I basically start with if I have a lyric idea that really is burning a hole and wants to get expressed, like “Coming Around Is Going Through” or “The Ones We Couldn’t Be” – the last song on the record – I really knew that was going to be a song that I was going to write on the piano. The rest of them [on this album], the process is different in the sense that I was custom writing this time to add musical grooves into the set when I play live.

MC: While on tour you still make time to bike and do yoga. What tips can you offer for staying healthy and active with such a busy schedule?

BR: I think, being 66, part of the reason we can go on the road and have a good time is it’s really important to take care of yourself. And sleep is a premium. But the most important thing for me is diet and exercise and getting outside. It feels like being eight-years-old when you’re on a bike and you’re just cruising. It’s been crucial as a way to stay healthy and keep your immune system going. So exercise, enough sleep, and as I’ve gotten a little bit of arthritis over the years I cut my grains about two years ago and basically if I feel like pasta or a side dish of grains or bread I tend to have quinoa. Then the most profound practice for me is, five times a week, an hour and a half yoga practice. I recommend doing it with a buddy because once you learn how to do it there’s lots of classes everywhere, but there’s lots of fantastic DVDs and Youtube [videos] if you have limited resources. It’s really been a fantastic thing.

MC: And, of course, the concerts themselves are a workout on their own.

BR: Performers are always astonished that even if you happen to have a flu or cold or some stomach problem, during the time you’re on stage all of that kind of goes away. It’s really miraculous – your adrenaline kicks in and then you can come off stage and all of a sudden your nose starts running again and you’re sneezing again. It’s a healing energy that you get as well as probably the most fun you can have. After all these years … it’s still as much fun as it looks like up there. I’ve been sober for 30 years so I’m sure that makes a big difference. If I was still partying at this age, or even 10 years ago, I don’t know if you and I would be talking right now.

MC: Well, I’m happy we are able to talk, and that you’ll be touching down in Canada on your next tour. What are your favourite memories of your time in the Great White North?

BR: I would have to say the Mariposa [Folk] Festival [in Orillia, Ont.], the Winnipeg [Folk] Festival, we played Edmonton recently, and then we added the Nova Scotia [Dutch Mason] Blues Festival a couple of times and Vancouver [Island Music] Festival … I think the audiences are able to grasp a broad range of musical styles and that’s one of the things that makes Canada really fun to play too. They’re pretty sophisticated … we can play some interesting sidelines and go into some deep places in the outdoor settings and the theatre shows are always intimate and enthusiastic. So I don’t know if I have a favourite city, but I love the Rockies out in the west so much. Because it’s close to California I go to Vancouver a lot.

MC: You’ve said, when it comes to people like your father [Broadway star John Raitt] and Tony Bennett, that, “I’m modelling myself after them. People only get more interesting and deeper as they get older.” How do you feel that you have become more interesting or deep over the years?

BR: Well, I hope I’m more interesting. I could probably be pretty tedious if I’m repeating myself. [Laughs] I think that as an artist, your ability to interpret a lyric and understand and embody what you’re singing about – it’s not a conscious thing, it just comes with experience. And just the slings and arrows of life and the wisdom that comes from living this long is going to be reflected in the way that you do your art and the way that it comes across … I hope I know more [about] what I’m doing. I certainly don’t sweat the small stuff as much and I have more confidence and I don’t worry what people think of me as much as I did in my 20s.

MC: You’ve got 10 Grammys, lifetime achievement awards, you’re in the Rock and Roll Hall of Fame – what do you still hope to achieve in your career?

BR: I would love to keep growing as an artist. I’ve recorded with so many of my heroes. When I look back at my discography I just was shaking my head going, “Oh my gosh, is there anybody left I haven’t played with?” [Laughs] And there’s still quite a few. There’s too many people to be able to collaborate with but you never know what will happen … Just continuing to grow and experiment and stay curious – I think that would be my biggest goal. And, of course, if I can be healthy and effective as a social activist I want to continue to be of service and make a difference that way. And just try to live as healthy and balanced a life as I can for whatever time I’ve got left. And if I’m blessed with being able to keep my voice and my chops and my health I hope I’m on the road until my 90s at least.

For more information about Dig In Deep, or to purchase the album, visit www.bonnieraitt.com.