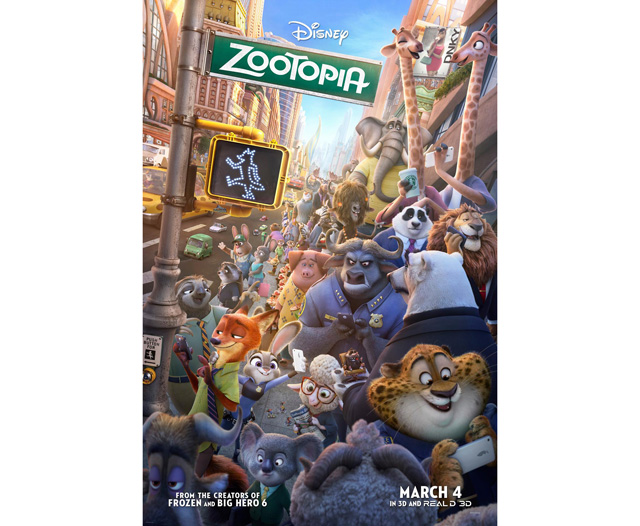 “We may be evolved but, deep down, we are still animals.”

Choice Quote: “We may be evolved but, deep down, we are still animals.”

The Hype: Judy Hops (Goodwin) is a rookie police officer in Zootopia, a metropolis where anamorphic versions of every species live in peace and harmony, side-by-side, prey and predator alike. From day one Hops, a diminutive bunny, struggles to earn the respect of both her peers, including the “bullish” Chief Bogo (Elba), and the bad guys she chases down. When a rash of missing animal cases hits the city, however, it leads to a bigger threat than anyone could have realized. Alongside her con-artist fox pal Nick (Bateman), Hops must explore every inch of Zootopia – from Tundratown to the Rainforest District to Little Rodentia – in an effort to save both Zootopia and her job.

BONUS: Canada’s own Peter Mansbridge has a role in the movie, playing newsman Peter Moosebridge. Click here for our one-on-one with the veteran journalist about how his role in a major Disney film came to be.

The Reality: This is one of the most clever, funny and original films I’ve seen since last year’s Disney Pixar hit Inside Out, which we predicted at the time would be the biggest animated movie of the year. Fast-forward a few months and Inside Out picked up the Best Animated Film Award at last weekend’s Oscars.

In my review for Inside Out I wrote that one of the key elements that made it one of the best overall films of 2015 was, “creativity, evident in the entire world we discover inside young Riley’s head … It’s the kind of detail that the kids appreciate because of the adventure happening within, while the adults marvel at the ingenuity of it all.” The exact same principal holds true here.

It’s true that Zootopia boasts a fantastic cast, lots of laughs, a wonderfully-crafted plot that will keep even the adults guessing, and a heart-warming message about love, inclusion, anti-prejudice and embracing our differences. But the key to this movie is its creative ingenuity.

Zootopia is a world where humans don’t exist and animals evolved into anamorphic beings that act as humans would. But the architects of this movie didn’t just plop a bunch of elephants and zebras in chinos and then crowbar them into a world that simply resembles our own. No, everything from Zootopia’s infrastructure to public transit to the retail kiosks and recreation locales are specifically designed to accommodate the various species – their size, shape, needs – that share this world. This may go over the heads of little ones, but adults will completely appreciate the intricacies of it all. And, by the way, keep your eyes peeled for billboards and advertisements in the background – things that play no part in influencing the plot or story but are so clever that they’ll have you smiling at the fact that the filmmakers thought of it. For example: at one point we see signage for Zoober – Zootopia’s “animal migration service.” In other words, Uber for animals.

Add to all of this the social structures, prejudices and struggles with their own evolution that these characters must confront throughout the course of the film and it really does amount to one of the best films, animated or not, that you’ll see all year.

And, oh yeah, the kids and grandkids will love it too.

The Verdict: Zootopia is the highly original, inventive, hilarious successor to Disney Pixar’s brilliant 2015 hit Inside Out.

Zootopia is in theatres today.