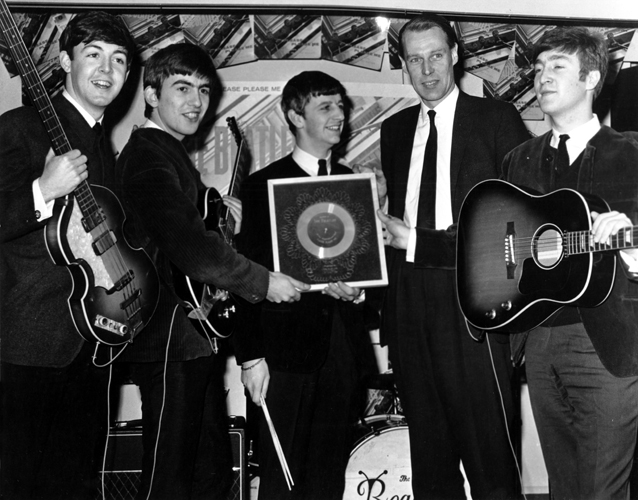 The Beatles and George Martin in 1964 (Courtesy Getty Images)

George Martin, who died at age 90 in 2016, was the legendary music producer whose understanding of orchestral arrangements and musical scores helped propel the Beatles to unprecedented stardom.

The man who Paul McCartney called “like a second father to me” and said, “If anyone earned the title of the fifth Beatle it was George,” left an indelible mark on music history in his roughly half-century as a musician, producer and arranger.

In honour of his life achievements, we look back at 10 fascinating facts you may not know about one of the most important figures in 20th century music.

1. As a child Martin was eagerly enrolled in piano lessons but only attended a handful before being pulled from them after an argument. He went on to teach himself the piano.

2. Before setting his sights on a music career, he worked in fields ranging from construction to a clerk with the British government during the Second World War to a stint in the Royal Navy.

3. Some of Martin’s earliest work included including producing albums for comedy greats like Peter Sellers, Dudley Moore and Sir Peter Ustinov in the 1950s.

4. His first music hit was actually an electronic music song called “Time Beat,” just months before meeting the Beatles in 1962, which he produced under the assumed name “Ray Cathode.”

5. Beatles manager Brian Epstein introduced Martin to the Beatles. However, the first time Martin heard their music, he was not impressed. As the BBC notes, “Martin walked out of the band’s first recording session at Abbey Road, leaving his engineers to supervise the recording of Besame Mucho while he went to the canteen.”

6. It was a clever quip from George Harrison that helped endear the Fab Four to Martin. After a session in the studio Martin asked if there was anything the bad didn’t like. The quiet Beatle spoke up: “Well, for a start, I don’t like your tie.”

7. Martin’s genius with the Beatles lay in his understanding of orchestral arrangements and musical scores that elevated songs and entire albums from rock music to rock standards. But his genius went beyond his groundbreaking arrangements. As one publication noted, “He and his engineers worked tirelessly with the Beatles in their experiments with loops, tape speeds, backward recording and editing to create the psychedelic masterpieces Revolver and Sgt. Pepper’s Lonely Hearts Club Band.”

Lennon said that Martin, “helped us to develop a language to talk to [other] musicians” while McCartney, in a tribute on his website earlier today, remembered a specific instance when Martin’s musical talents revolutionized one of his tunes:

It’s hard to choose favourite memories of my time with George, there are so many but one that comes to mind was the time I brought the song ‘Yesterday’ to a recording session and the guys in the band suggested that I sing it solo and accompany myself on guitar. After I had done this George Martin said to me, “Paul, I have an idea of putting a string quartet on the record”. I said, “Oh no George, we are a rock and roll band and I don’t think it’s a good idea”. With the gentle bedside manner of a great producer he said to me, “Let us try it and if it doesn’t work we won’t use it and we’ll go with your solo version”. I agreed to this and went round to his house the next day to work on the arrangement.

He took my chords that I showed him and spread the notes out across the piano, putting the cello in the low octave and the first violin in a high octave and gave me my first lesson in how strings were voiced for a quartet. When we recorded the string quartet at Abbey Road, it was so thrilling to know his idea was so correct that I went round telling people about it for weeks. His idea obviously worked because the song subsequently became one of the most recorded songs ever with versions by Frank Sinatra, Elvis Presley, Ray Charles, Marvin Gaye and thousands more.

This is just one of the many memories I have of George who went on to help me with arrangements on ‘Eleanor Rigby’, ‘Live and Let Die’ and many other songs of mine.

8. Of the many artists that Martin has worked with in multiple musical genres — from Pete Townsend to Celine Dion to the Dire Straits — perhaps the most famous non-Beatles song he produced was “Candle in the Wind 1997,” Elton John’s tribute to the late Princess Diana and the all-time best-selling single. He also produced Shirley Bassey’s “Goldfinger” and Paul McCartney and Wings’ “Live and Let Die,” both legendary James Bond themes.

9. Martin helmed the production of the Beatles Anthology in the mid-1990s, but he was still working on the Fab Four’s music a decade later when he and his son Giles arranged the music for Cirque Du Soleil’s Beatles-inspired show Love.

10. Perhaps appropriately, the news of his passing was broken to the world by a Beatle. Ringo Starr announced that Martin had died on his Twitter account and then paid tribute to him with a vintage shot of all five Beatles.

Thank you for all your love and kindness George peace and love xx😎✌️🌟💖 pic.twitter.com/um2hRFB7qF