Popcorn Picks: Born to Be Blue 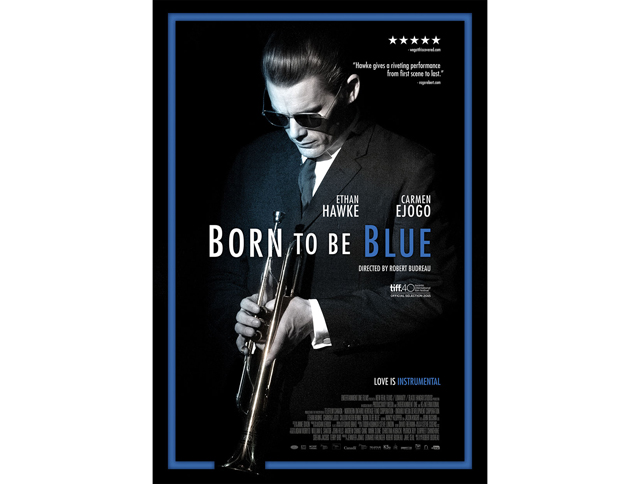 Ethan Hawke is brilliant as Baker, Carmen Ejogo shines as his lover Jane and the soundtrack cuts like a spotlight through a smoky room.

Choice Quote: “You want some advice, Baker? Go back home to the beach, man. Come back when you’ve lived a little.”

The Hype: A biopic about a lost period in the life of legendary jazz trumpeter Chet Baker, dubbed the “James Dean of Jazz,” when he fell from 1950s teen idol into heroin addiction and near self-destruction in the 1960s.

The Reality: As the saying goes, why let facts get in the way of a good story? Budreau doesn’t – Born to Be Blue is based on Baker’s life but creative license is certainly taken – and that’s okay. Ethan Hawke is brilliant as Baker, Carmen Ejogo shines as his lover Jane and the soundtrack cuts like a spotlight through a smoky room.

Filmed mostly in Sudbury, Ont., the story of Baker in this film is one of a troubled jazz musician desperate to impress Miles Davis at the famed Birdland jazz club; a drug addict thrust into depression and heroin abuse by a twist of fate; a once celebrated trumpeter forced to relearn the instrument; a lost soul finding a measure of stability in the woman he loves while at the same time smothering her.

Hawke, as Baker – with whom he shares an eerie physical resemblance – nails everything from his posture to his singing voice to the personality that walks the line between repentant artist and repeat junkie. Ejogo, as Jane, is in fact an amalgamation of a number of Baker’s lovers – a clever irony given the character is an actress who plays Baker’s ex-lover in a film-within-a-film moment. There’s something about Ejogo and how she carries herself in this role – sensible, powerful, independent, sympathetic yet guarded. She’s the type of woman who would live with Baker in a van by the ocean but who could also spread her wings and fly  on her own at a moment’s notice.

Director Budreau, however, also made a point of highlighting the music, allowing long, full songs to play out over the course of a scene for full effect, instead of chopping them up into little snippets or medleys. The result is the permeation of a raspy, bluesy, brilliant but sorrowful sound that mirrors the man blowing the horn.

Sure, this isn’t a by-the-books biopic. These events didn’t all happen like this in real life, if they happened at all. But that’s not the point. Truth or fiction, it’s the story that counts. And to that end, Hawke nails the essence of Baker and Ejogo completes the picture. And the music plays on.

The Verdict: This Baker biopic brings to mind one of his most famous tunes, “My Funny Valentine” – his life wasn’t always pretty, but it’s captivating nonetheless.

Born to Be Blue is in theatres today.