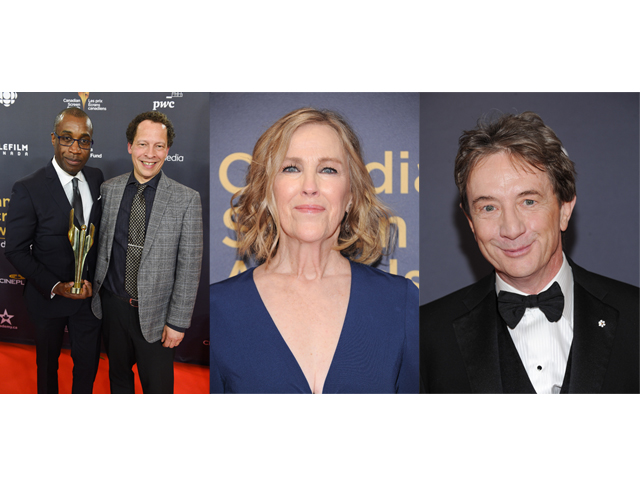 It’s the night where Canadians celebrate the best in homegrown television and film – the Canadian Screen Awards. From Emma Donoghue’s big win to Martin Short’s Lifetime Achievement Award to The Book of Negroes’ sweeping victory and the unlikely “feud” between Christopher Plummer and nine-year-old Jacob Tremblay, we’re counting down our favourite boomer moments.

Canuck comedian Norm MacDonald, 52, and his sardonic sense of humour took up the hosting duties this year. His brand of comedy isn’t for everyone, so chances are you either enjoyed his quips or you couldn’t wait for him to shuffle off stage.

MacDonald started with a few pot shots at Canadian entertainment, including the introductory remark, “Today we’re here to celebrate Canadian talent in film and television, which is kind of like the Northern Lights – you probably haven’t seen them but you’ve heard they’re amazing.”

During his opening monologue he pointed out both Christopher Plummer and Room child star Jacob Tremblay in the crowd, noting “Jacob is only nine years old and Christopher Plummer is 86-years-old but they have a few things in common – both have a deep love for their craft and both are up way past their bed time.”

He joked about Martin Short’s upcoming Lifetime Achievement Award: “It’s the Academy’s way of saying ‘Thanks, but we’ve had enough’” but, best of all, he proposed a name for as-yet unnamed Canadian Screen Award trophy – the Candy, after Canadian comedy legend John Candy. He even implored the presenters and winners to call it that, which most did.

Sure, not every joke landed, but as hosts go he did a fine job keeping the show moving along at decent pace. A two-hour production compared to a four-hour marathon like the Oscars? We can get used to that.

Catherine O’Hara and Eugene Levy Both Win their First Candy

Catherine O’Hara and Eugene Levy have done it all in show business and now they can each add a Candy to their lists of accolades. They won for Best Actress and Actor in a Comedy Series respectively, for their roles as husband and wife opposite each other on Schitt’s Creek.

O’Hara, 62, in her acceptance speech, said, “Playing a character who thinks she’s lost everything has turned out to be an embarrassment of riches” while Levy, 69 noted he was brought onto the show to play the straight man. “I was really excited at the prospect of playing probably the straightest thing in my career and this award means I’ve failed miserably.”

Click here for our one-on-two interview with O’Hara and Levy.

The Book of Negroes Completes A Huge Week with a Win

In the days leading up to tonight’s televised CSA gala a number of Candy’s were handed out at non-televised ceremonies. The CBC mini-series The Book of Negroes had already won huge, taking home nine Candy’s on Wednesday evening including honours for lead actor Lyriq Bent, supporting actress Shailyn Pierre-Dixon and director Clement Virgo. Tonight, to cap off their award run, the mini-series, based on the novel by Lawrence Hill, won for Best TV Movie or Limited Series.

“Thank you so much for the Candy,” Virgo, 49, said during his acceptance speech. “It tastes sweet.”

Click here for our interview with Clement Virgo and Lawrence Hill.

Emma Donoghue Gets Her Moment in the Spotlight

Her novel Room was nominated for the Man Booker Prize, the screenplay she wrote based on the book was nominated for both an Oscar and a Golden Globe and tonight Irish-Canadian scribe Emma Donoghue, 46, finally got her moment in the spotlight – winning a Candy for her screenplay while also watching the stars of her film, Brie Larson and Jacob Tremblay, the director Lenny Abrahamson and the film itself all winning Candy’s in their respective categories.

After being compared to Jacob Tremblay in Norm MacDonald’s opening monologue, Christopher Plummer found himself facing off against the nine-year-old for the award for Best Actor in a Film. Tremblay won and in his speech gave a shout out to Plummer, saying, “You are a legend.” When Plummer, then, took the stage to close out the show with the announcement of the winner for Best Film, the 86-year-old received a standing ovation from the Sony Centre crowd. When the applause calmed down Plummer took the microphone, glared right out into the crowd and, stone-faced, quipped, “Eat your heart out, Jacob.”

Of course, when Room won the award for Best Film – beating out Plummer’s Remember – Plummer graciously greeted Tremblay onstage as he came up to accept the honour with the cast.

“How exciting is this – we’re going to witness Levy present a Candy to Short,” Norm MacDonald quipped while calling on Eugene Levy to introduce Lifetime Achievement Award honoree Martin Short.

Short, whose career includes successes in everything from SCTV in Canada to Hollywood to Broadway, was vetted by Levy, who first met him in 1970 at McMaster University in Hamilton.

“In the world of comedy, there is no mind smarter, no mind faster, no mind funnier than Martin Short,” Levy said. “Then again, I believe he mentioned that in his book.”

“Just because I said ‘Thank you’ doesn’t mean you should stop applauding,” Short, 65, said as he took the stage, his trademark wit as sharp as ever.

Short discussed his career and poked fun at loved ones, including, “the endless love of my three children, whose names are eluding me.”

But his speech eventually took a turn for the heartfelt with a touching tribute to his late wife Nancy, including recalling a joke she said on their honeymoon – “It’s better to love a Short, than to never have loved a ‘tall.’”