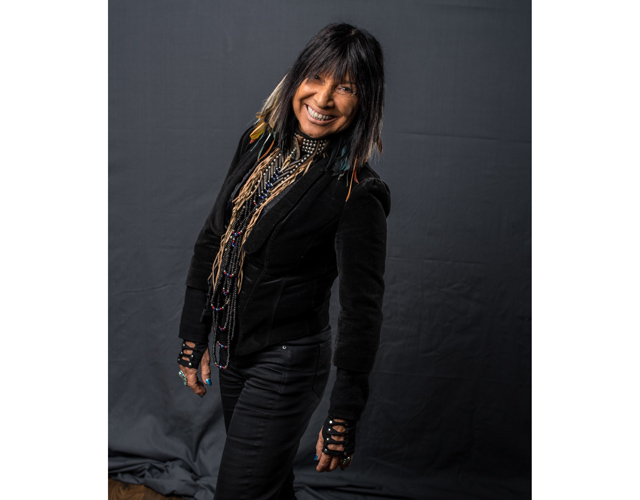 “You’ve won 18 Junos, the Order of Canada, you have a star on the Walk of Fame,” Jann Arden said to rocker Bryan Adams from the stage during the opening of the 2016 Junos, “but I can only assume that the thing you’re most proud of is when you photographed me naked.”

And with that nod to Arden’s “revealing” Zoomer magazine cover story, photographed by Bryan Adams, the biggest night in Canadian music kicked off, live from the Saddledome in Calgary.

Of course, before the Junos even hit the airwaves some major hardware was handed out. At a gala last night legendary Native Canadian singer/songwriter Buffy Sainte-Marie, 76, took home two of the three awards she was nominated for this year, with her Polaris Prize-winning Power in the Blood taking home Contemporary Roots Album of the Year and Aboriginal Album of the Year honours. Meanwhile, famed Canadian music producer Bob Ezrin, 67, won the Jack Richardson Producer of the Year Award for the Johnny Reid tunes “Honey Honey” and “What Love Is All About” from the album What Love Is All About. As well, Canadian music programmer Rosalie Trombley – dubbed “the girl with the golden ear” – was honoured with the 2016 Walt Grealis Special Achievement Award.

As for tonight’s televised ceremonies, check back in throughout the broadcast as we recap our favourite boomer moments below…

Okay, so we may be a bit biased given Jann Arden’s shout out to Zoomer in the opening monologue, but the Canuck singer and co-host Jon Montgomery — former Olympian and current host of The Amazing Race Canada — exhibited fantastic chemistry and kept the quips coming before bowing out and allowing the evening’s performers and presenters to take the stage.

A few memorable lines from their intro included the pair reminiscing about their past experiences at the same venue, with Arden admitting, “I may or may not have peed in a garbage can here in the 80s.” And after Montgomery discussed his experience in the Olympics, Arden joked that, “Thankfully, in music, there’s no drug testing, or else there wouldn’t be a single soul here tonight.”

Funny one-liners, chemistry and the ability to keep the show moving — are Jann Arden and John Montgomery Canada’s Tina and Amy?

Buffy Sainte Marie, “Carry It On”

Already a two-time winner at this year’s Junos, Sainte-Marie appeared before an enthusiastic crowd and received a great ovation for her spoken word piece, “Carry It On,” from her album Power in the Blood. The crowd continued to cheer the poetry of her words as she spoke them – a powerful message that began with:

Hold your head up

Lift the top of your mind

Put your eyes on the Earth

Lift your heart to your own home planet

What do you see?

What is your attitude

Are you here to improve or damn it

Look right now and you will see

Oh carry it on – We’re saying

Oh carry it on – Keep playing

Oh carry it on – And praying

Introduced by Jann Arden as “truly a renaissance man,” legendary rocker Bryan Adams, 56, brought the house down with the tune “Go Down Rockin’,” from his Juno-nominated album Get Up.

We all knew that the man behind The Guess Who and rock classics like “These Eyes,” “American Woman” and “Share the Land” was a first-ballot hall of famer for virtually any rock music hall of fame out there, but the Junos made it official tonight when they inducted Burton Cummings, 68, in to the Canadian Music Hall of Fame.

After an intro by rockers Nickelback, who called Cummings “amazing – he transcends time, genres and generations,” a video tribute to the singer/songwriter’s career aired. Among the luminaries in the video tribute was producer Bob Ezrin, who said of Cummings, “He’s like a guy who soaks in the universe and spits it back out through his own personal filter.”

Entering to a prolonged standing ovation, a teary-eyed Cummings was forced to wait until the cheering died down to dedicate the honour to his hometown of Winnipeg and mention his mom who he lost two years ago. He thanked his manager, his wife, bandmates and others before closing by saying, “I am truly, truly honoured, this is not false modesty … I will always try and honour the music. Thank you so much.”

Burton and Arden Close Out the Show

Joined by singer/songwriter Shawn Hook, Burton Cummings and Jann Arden closed out the show in rock and roll style, bringing the crowd to their feet for the newest Canadian Music Hall of Fame inductee. With the audience on their feet and the building rocking courtesy of two of Canada’s greatest musical performers, there wasn’t a more fitting way to close out the 2016 Juno Awards.